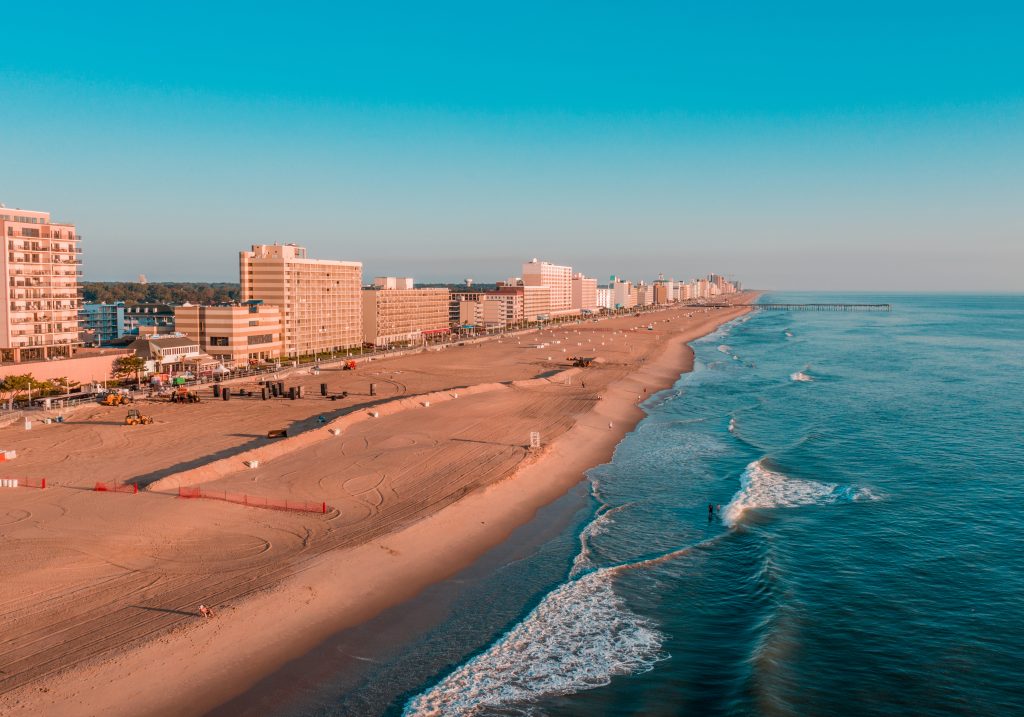 As one of the best vacation destinations on the East Coast, the “Resort City” is undoubtedly an amazing place to visit. If you ask someone to describe Virginia Beach, they’ll most likely talk about the sea, sun, and incredible surfing. If you ask a local angler to describe the local fishing scene, they’ll most likely tell you that it’s out of this world. When it comes to deep sea fishing, Virginia Beach is world-class.

In this guide, we’ll concentrate on the deep sea fishing opportunities in this part of the mid-Atlantic, along with what you can catch, when, and where. We’ll also talk about the local regulations and fishing tournaments available for deep water enthusiasts. But if you’re interested in all the fishing opportunities Virginia Beach has to offer, take a look at this guide.

So, what makes deep sea fishing in Virginia Beach so special? Where to start? Myriads of much-desired species live in and around bottom structures, shipwrecks, and underwater aircraft. Then there are the nderwater canyons are the hunting grounds of Marlin and Tuna. Meanwhile Mahi Mahi and Sailfish hang out closer to shore. Here are our top picks for deep sea fishing targets, starting with Billfish.

First of all, there are Swordfish, the so-called “gladiators of the deep.” These remarkable fish actively patrol the offshore waters off the Mid-Atlantic coast. As these fish live in the deep, consider paying a visit to one of the ocean canyons.

The best time to catch Swordfish in Virginia Beach is from early October to January. And while anglers can try their luck at Swordfishing any time of day, night fishing is especially productive – and exciting! If you’re up for a challenge, book an overnight Swordfish charter.

Another prized trophy species that can be caught on a Virginia Beach deep sea fishing charter is Sailfish. If you’re a light tackle enthusiast, chances are that these gorgeous fish are already on your radar.

So, where and when should you look for Sailfish? They usually feed in mid-level depths near underwater structure, although most people catch them right on the surface. Sailfish are usually a summer catch, although they stay in deeper waters year-round.

Some local veterans say that Mother Nature practically throws White Marlin at you in Virginia Beach. There are even hotels and inns named after these magnificent creatures!

“White Marlin Central” is a good place to start your adventure. It’s a swath of the continental shelf, stretching south of the Norfolk and north of the Wilmington canyons. White Marlin sometimes appear as early as late spring as water temperatures climb into the upper 60s. However, early summer is usually considered the beginning of the season. The fishing builds through summer and continues into October.

Anglers aren’t limited to Whites, though. Blue Marlin are also pretty popular, with some locals saying that, in Virginia Beach, Blue Marlin find you. The season usually begins in May and goes all the way up to October. If you’re feeling lucky, though, you can look for Blues any other time of year, too.

There are a lot of Marlin “honey holes,” including the shallows near the Cigar, a seamount on the 20-fathom line, along with the Fingers on the 30-fathom, all the way out to the continental shelf and the canyons. But more on that later.

Wondering if you can go deep dropping in Virginia Beach? Absolutely! Golden and Blueline Tilefish are the stars of any deep dropping adventure in “VB”.

As true bottom dwellers, Blueline Tilefish usually hang out at depths of 240-780 feet, while their Golden brothers live even deeper – up to 1,500 feet. Golden Tilefish hang out in burrows on the ocean floor, while Bluelines can usually be found along the edge of a dropoff.

It goes without saying that Tilefish action happens pretty far offshore. You’ll be heading to wrecks and deep trenches to drop bait for these fish. The season runs year-round, although you may have better luck landing Tilefish from May until June.

Snowy Grouper are another bottom fish species on our list. They hang out at rocky bottoms at depths of up to 800 feet. As perfect candidates for Virginia Beach deep sea fishing trips, Snowy Grouper are among the most sought-after species during any bottom fishing voyages.

Just like Tilefish, you can go deep dropping near wrecks for Snowies practically all year round, woth the season lasting from April until December.

By the way, did you know that Snowies begin as females, and some, later on, turn into males?

Catching Tuna is a fishing experience that rivals no other, and Virginia Beach is no exception. Head to deep offshore canyons, and you’ll find Bigeye, Yellowfin, and Bluefin Tuna – and even the occasional Blackfin.

Yellowfin Tuna fishing begins in late April and goes well into November, although you can target them all year round. Locals say that best catches happen in spring and fall, while the summer months are the peak of Bigeye Tuna fishing. Bluefin Tuna can be caught in the summer and winter months, as well as March.

So, where to find Tuna in Virginia Beach? Locals suggest heading out just before dawn or right after sunset. Search the deep waters off Cape Henry or Chicoteague, the sloughs and ridges near Cape Charles Light, the Southeast Lumps, and the Fingers, and you’re unlikely to be disappointed.

Now that you know what’s on the Virginia Beach deep sea fishing menu, it’s time to talk about “where”. First of all, we recommend booking a full day trip, since some of the best spots are 70+ miles from shore. Of course, you can stay relatively close to ports. For instance, the Chesapeake Light Tower is only 13 miles offshore.

However, if you want to go big, you need to go far — and deep. In fact, the deeper the better. Big predators and worthy trophies tend to hang around places like the Gulf Stream and Norfolk Canyon.

How to Go Deep Sea Fishing in Virginia Beach

It’s now time to talk about how deep sea fishing in Virginia is done. There are various tips and tricks to get a fish to bite, and every captain has their own preferred tactic. In this section, we’ll discuss the two most productive and commonly used techniques – trolling and deep dropping.

Trolling is the most popular method to land Tuna and Billfish. Since you’ll be fishing offshore, you’ll normally begin your trolling action when you’ve reached the fishing grounds.

A lot of captains set their trolling spreads to get a bent rod, which usually requires a lot of effort. They let their lures and bait out at different distances from the boat, spreading multiple rods at the same time. Then, slow trolling begins.

Some anglers troll 4 lines with Ballyhoo for White Marlin, some replace the bait with plastics. Others include chunking and chumming when targeting Tuna. Sailfish are often attracted to slow trolling that’s similar to King Mackerel fishing, while Swordfish can react well to natural baits with chemical lightsticks. As you might already know, there are various things you can do while trolling to get the bite.

When it comes to deep dropping, it’s essentially bottom fishing but in deeper waters. This technique works best for catching Grouper and Tilefish, although you can also deep drop for Sea Bass. A typical deep dropping bait includes cut fish, metal jigs, and squid.

Deep dropping happens over the rough bottom in 250+ feet of water. It goes without saying that your captain will needs pretty strong equipment to work these depths. A lot of captains use electric reels and strong braided lines to reach the bottom hundreds of feet below. And once you get the bite, you’ll most likely be jigging to get the fish to the boat.

When to Go Deep Sea Fishing in Virginia Beach

The short answer is, anytime! Virginia Beach’s deep sea fishing season is year-round. Since there’s always something biting, you only need to decide what exactly you’d like to catch.

Spring is a good time to check the bite around the Chesapeake Light Tower and target Mahi Mahi and Mako Shark. As well as that, you can look for Atlantic Spadefish — these are great species for beginners. Late spring is perfect for a deep dropping trip for Tilefish and Grouper.

Early summer is reserved for Tuna near underwater canyons and deep trenches. From mid-June onwards, you can go for Marlin, before moving to Swordfish and Tuna in the fall and winter months.

While deep sea fishing itself is pretty challenging, a lot of anglers take it to the next level. The Pirate Cove Billfish Tournament and Virginia Beach Billfish Tournament are among the most popular offshore events in the area. If you’re looking for something a little less extreme, check out the Virginia Saltwater Fishing Tournament.

Another important thing to keep in mind is fishing licenses. You need to obtain one to go deep sea fishing in Virginia Beach, which can be done online, by phone, or in person. However, you don’t need a license if you’re fishing on a licensed charter boat. Feel free to learn more about Virginia fishing licenses here.

Finally, it’s also important to find a local captain who knows the area well. A professional crew usually has a lot of experience fishing deep trenches, wrecks, and other remote spots. There are various charter boats available for anglers of all ages and skill levels, so you can easily find a crew that suits your fishing needs.

As a great place to spend your next vacation, Virginia Beach has a lot to offer. The climate is amazing and the beaches are great. As an angler, you want to taste the local waters. And if you happen to love the offshore, you might want to go beyond the Chesapeake Bay. When there’s the chance to score a Billfish slam if only you put in the time, who can resist a trip to the deep? Come to the “Resort City” and see why Virginia Beach deep sea fishing opportunities shouldn’t be overlooked!

Have you ever been deep sea fishing in Virginia Beach? What catch are you most proud of? Let us know in the comments below!