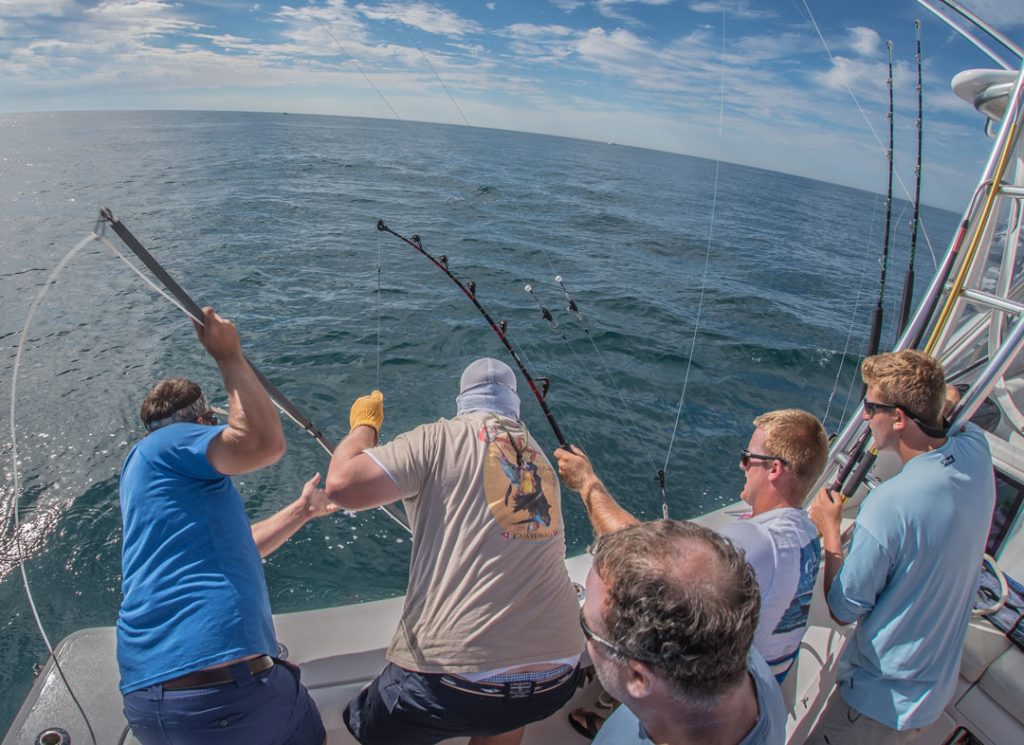 “Lift and reel down. Do it again, quicker! One more time. Now, pull his head toward me. Got ‘em!”

These are usually the final words my son Tommy or I say to an angler when he is trying to finish a tuna after a long fight, those decisive moments when you have the fish in sight and must finish the game. These moments can be the most exhilarating part of the battle, but also the most nerve-wracking.

For first-time tuna anglers who have no experience on a rod, it is difficult to know how to react when the fish goes berserk by the side of the boat. It can be especially heartbreaking (for the angler, not the tuna) if it is lost after a lengthy battle. So, how do captains and mates work together to ensure that clients land and bring home what may be their first tuna ever? Here’s how we do it.

The summer tuna, both bluefin and yellowfin, that we see on New Jersey’s midshore grounds usually range between 40 and 70 pounds, but last year, there was a run of 90- to 100-plus-pound yellowfin for a period of about two weeks. In fact, last season’s yellowfin bite was one that many anglers had never experienced before due.

While not impossible to land, larger tuna are going to put a real hurting on a beginner, so 40- to 70-pound fish are the perfect size to fight, land, and learn the proper techniques. Don’t get me wrong, though, because it can still be a challenge, especially when fatigue sets in late in the fight, just when power and leverage is needed the most.

As far as captain and mate responsibilities go on my boat, Tommy and I work together. Both of us like to coach and instruct clients, so we take turns doing so. Many times, his turn (or mine) will be an entire trip for consistency with the directions the clients are receiving. Nothing is worse than having more than one person shouting directions or commands during the heat of a battle.

After the hookset, we coach clients through the entire fight with respect to reel cadence, how to short stroke (lift and reel down quickly), and when to merely hold on and let the tuna run. Whomever is acting as the mate also shouts out commands to the captain of the day about turning the boat or which way to go if we need to chase a fish.

On my 28’ Parker Sport Cabin, we fight tuna with the boat downwind and the angler in the aft corner facing the wind. We position the boat so that the mate and the angler are on the starboard aft side. We turn the wheel as necessary, sometimes even circling, to keep the tuna in this position so it doesn’t run underneath the boat. If the tuna does head under the boat, the mate quickly grabs the rod from the client and steps out onto the swim platform to bring the fish around the engines and to the other aft side of the boat. This may happen several times during a fight. On a center-console boat, one has the advantage of walking the tuna all around the boat when fighting it, but it’s still best to bring it to the rear of the boat before using the gaff. This puts the angler closest to the water and away from the additional bow height and rails.

Once a tuna’s deep color is spotted, an angler often gets the feeling that the battle is almost over and the adrenaline starts flowing again. The angler usually gets a second wind and is able to gain on the tuna for a while. However, it quickly becomes apparent that this is the most critical point: the end game begins and our coaching becomes most important.

When deep color is seen, the tuna is usually going into what is known as its “death spiral.” The tuna circles, disappears under the boat, then comes out again. When the tuna swims under the boat in its forward circle, the angler is coached to reach down and out over the gunnel with the rod. When the tuna comes back out, we advise the angler to wait until the tuna starts to turn back toward the boat again on the top half of the circle, then lift and pull up on the rod with quick, short strokes. This is the point when an angler can gain head control on the tuna, lifting and pulling it up inch by inch, closer to the surface. This process is repeated for each circle the tuna makes.

Many times, however, the tuna sounds, and an already exhausted angler has to start the process all over again. This can do in many an angler, meaning we may have to tell him to pass the rod off if we see he has reached the point of exhaustion.

Once the tuna gets close to the surface, calmness must prevail. I have been on boats when it becomes chaotic because everyone is shouting at the angler. In the end game, it is important for the angler to put enough pressure on the tuna to have its head break the surface, then short-stroke the fish close enough to the boat that it can be stuck with the gaff.

The head of the tuna is the target for the gaff shot. As Tommy says, the only person talking to the angler from this point on should be the person with the gaff in his hand. The gaffer tells the angler when to lift, pull, reel down, or let the tuna go around one more time as he prepares to stick it.

The gaffer also make the call if a second gaff (or a harpoon) is needed. When bluefin or yellowfin more than 80 pounds are the target, I have both on board. Often, a client struggles with a tuna during the end game and it is just out of reach of the gaff. Rather than take a chance of losing the tuna or having to pass the rod off, Tommy or I grab our 10-foot harpoon, then reach out and poke the tuna with the dart or throw it a few feet to end things. When just out of reach of the gaff, I have had tuna break off when they turn on their sides and vigorously start beating their tails and swim away from the boat in last-ditch efforts for survival. This can easily happen if we had to drop down to 30- or 50-pound-test fluorocarbon leaders to get a bite.

A good summer day on the tuna grounds can have you catching double-digit numbers of fish. On these days, many tuna will need to be released. If you have your limit, then you must adhere to Federal Regulations at 50 CFR 635.21(a)(1), which states, “An Atlantic highly migratory species that is not retained must be released in a manner that will ensure maximum probability of survival, but without removing the fish from the water.”

This is easier said than done because the tuna must first be subdued enough to be brought boatside, then you have to reach over the gunnel and pop the hook out. A tuna fought to exhaustion must be revived by swimming it boat side before release. If its length is borderline, you may need to take a length measurement, so make sure you have a planned method in place for how you will do this. Using a tuna lip-gripper like the Key West Tuna Release or the Pratiko Big Game Long Grip are good options to keep the tuna up on the surface next to the boat. These big, oversized grippers are not cheap, however, and run between $300 and $600, so many anglers use a lip gaff to hold the tuna boatside. Our boat has a device rigged on it so the tuna can be measured in the water. We use a bluefin tuna-release ruler with large numbers that are quite easy to read when we reach down and stretch it from tip of the upper jaw to the fork of the tail.

We are also a tagging partner for the Atlantic Tuna Project and tag all our released tuna. The tag information and fish data are sent through NOAA’s Cooperative Tagging Center, which helps inform domestic and international fishery management issues.

For tuna that are coming home for the dinner table, they must be bled and iced quickly. This eliminates the heat that built up in their muscle tissue during the fight and keeps the meat fresher, better tasting, and firm. Making a slurry in the fish box with ice, salt water, and kosher salt works well for this and provides room to fit more tuna in the box. The fish will chill much more quickly in a slurry of ice and salt water than in ice by itself, though keep adding more ice to the slurry as needed.

The post The Tuna End Game appeared first on On The Water.