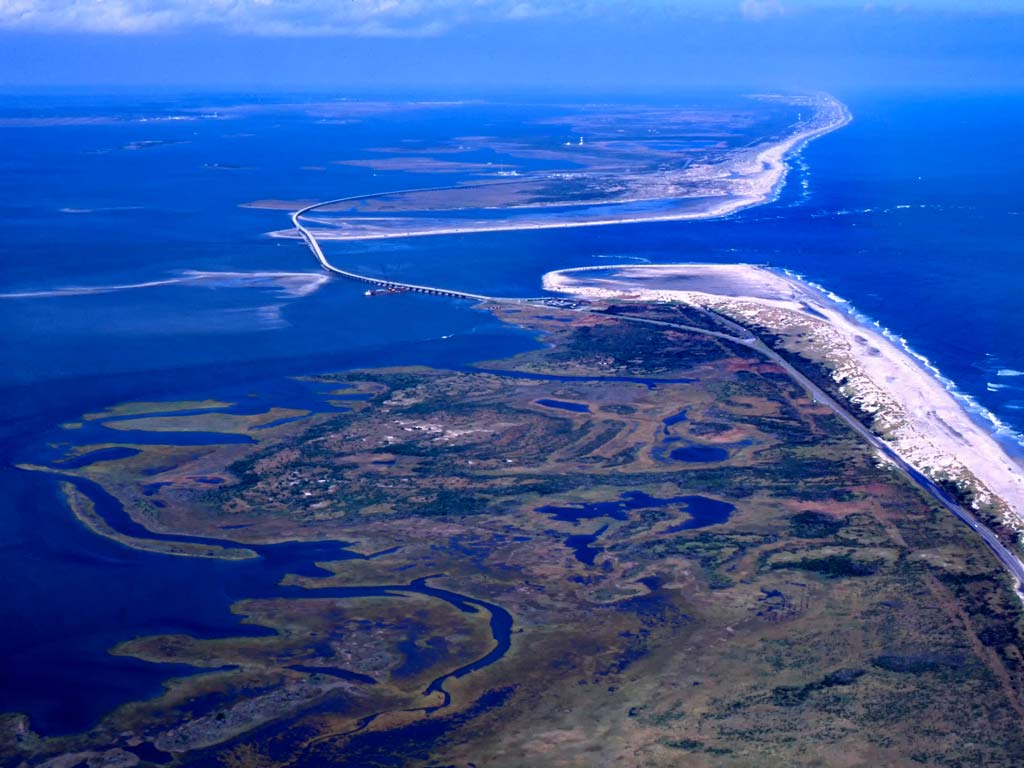 Nestled in the very heart of the Outer Banks, Oregon Inlet plays an incredibly important role for local anglers. Namely, it serves as a home and a passageway to the largest charter boat fleet on the eastern seaboard. So, it comes as no surprise that fishing in Oregon Inlet and the surrounding waters is off the charts. After all, it’s what the Outer Banks area is famous for.

Oregon Inlet connects Pamlico Sound and the OBX inshore waters to the Atlantic Ocean. This means you’re getting the best of both worlds when it comes to fishing. You can choose between fishing the calm waters inside the barrier islands that protect them from the ocean swell. Or, you can venture out into the ocean and fish the reefs and the Gulf Stream.

Either one you pick, you’ll be in for some of the best fishing on the East Coast. And in this article, we’ll cover all the things you need to know before you begin your Oregon Inlet fishing adventure. You’ll get to read about the fish species you can catch, as well as how and where to go. So let’s dive into it!

What can you catch fishing in Oregon Inlet?

Since you’ll have access to both inshore and offshore fishing grounds, there’ll be many different species you can catch around Oregon Inlet. We’ll cover a few local favorites, to help you get an idea of what you want to go for first. Have a look…

Red Drum, a.k.a. Redfish, are one of the most beloved inshore species across the country. From Texas, through Florida, and all the way up to Massachusetts, anglers love to target these fish wherever they can find them. Of course, the same goes for anglers fishing the waters around Oregon Inlet.

In this part of North Carolina, you’ll find year-round populations of Redfish hiding along the scenic marshes. They’re very eager biters, so you can target them using a variety of live or artificial bait. Most anglers love sight fishing for Redfish the most. It’s also a challenging way to target them – you’ll have to keep a lookout for their dotted tails breaching the water surface and cast your bait at the right moment.

Of course, the most exciting part comes when you actually hook them. Redfish are fantastic fighters for their size. They’re very stubborn fish, who’ll use all their strength to attempt to escape your hook. And if the Redfish you catch turns out to be a keeper, you’ll have a delicious dinner for when you get back to land.

Another two popular targets along this stretch of the Atlantic Coast are Spanish and King Mackerel. Both are prized for their taste and are usually found in good numbers when it’s their season.

Between the two, King Mackerel grow larger, making them the tougher fighters and more of a challenge. They typically pass along the Outer Banks in spring, fall, and often throughout winter. You’ll find them within a few miles of Oregon Inlet, making them a great option for shorter outings.

Spanish Mackerel, on the other hand, come even closer to shore than their big cousins. Their peak season runs during the summer months and it’s when anglers often catch them in the surf. From a boat, you’ll usually do some trolling to entice their bite, the same as with King Mackerel.

If you exit the Oregon Inlet and decide to fish the deep seas, you can add Tuna to your list of targets. However, to reach them, you’ll have to go about 35 miles offshore, into the Gulf Stream. It may seem like quite a ride, but these are some of the best Tuna fishing grounds on the planet.

There are four different species of Tuna you’ll usually have the chance to battle in the Gulf Stream. They include Blackfin, Bigeye, Yellowfin, and big Bluefin Tuna. No matter which you hook into, they’ll give you a fight for the ages. However, the giant Bluefins present the toughest challenge as it can sometimes take several hours to wrestle them to the boat.

Blackfin and Bigeye Tuna are generally caught between March and November offshore from Oregon Inlet. There are Yellowfin Tuna in the waters year-round, but you’ll usually find them in better numbers between spring and fall, with May and October being the hottest months. Bluefin Tuna visit these waters in wintertime, arriving in November and leaving by March.

In the Gulf Stream, you’ll also get the chance to reel in a few different types of Billfish. These include Sailfish, Blue Marlin, and White Marlin. In the world of big game fishing, each of these fish is considered highly challenging.

Among the three, Sailfish are the most abundant, which means you’ll encounter them a bit more often than their Marlin cousins. They’re extremely fast, capable of stunning acrobatics and jumping several feet into the air. However, they can’t quite grow as large as Marlin, making them a slightly easier fight.

When it comes to Marlin, they’re only matched by Bluefin Tuna in terms of being difficult to catch. Whether you hook into a Blue or a White Marlin, you’ll be battling a true deep sea monster. Marlin are not only capable of powerful, lightning-fast runs, but they can also jump into the air and fight for hours.

You’ll find Billfish racing along the same offshore waters where you’d chase for Tuna. The peak season for Sailfish and Marlin is summertime, making them a great big game option whenever the Tuna bite slows down.

As you explore the salty marshes, sounds, and the ocean coast, you’ll get the opportunity to catch a few other inshore species. These include fish such as Speckled Trout, Flounder, Bluefish, Striped Bass, Black Drum, Sheepshead, and more. Blacktip Sharks also visit the coastal waters often, and will always give you a good tussle.

Outside the Oregon Inlet, there are several reefs you can fish. They attract species such as Black Seabass, Triggerfish, Grouper, Amberjack, Cobia, and Barracuda. There are also a few more pelagics, such as Mahi Mahi and Wahoo that’ll often take the bait if you go trolling offshore. And if you’re still looking for something else to target, try deep dropping for fierce Swordfish and big Tilefish.

Ways to Fish in Oregon Inlet

Since there are various types of fishing grounds you can explore near Oregon Inlet, there are naturally different ways to approach them. Here are a few options to consider, depending on what you want to catch and how you want to fish.

As we mentioned at the beginning of the article, you’ll find a huge fleet of fishing charters in Oregon Inlet and the nearby Roanoke Island. So if you’re considering hopping on one, there’s really no better place to do so. You’ll find all kinds of captains, offering everything from inshore trips and nearshore meat hauls, to deep sea adventures.

The main benefit of hooking up with one of the local captains is that they know these grounds better than anyone. They’ll know where to take you if you’re interested in sight fishing for Redfish, where the reefs lie if you want to catch dinner, and how to keep you safe on long, offshore journeys.

Most of the time, a charter fishing trip will include all the necessary fishing gear, saving you the trouble of traveling with your own. Your captain will also be able to suggest what to target at the time of your trip and customize your outing so it fits your needs to perfection.

If you don’t want to go on a charter, there’s also the option of simply fishing from shore. Most of the action around Oregon Inlet takes place in the surf, on the different beaches in the area. However, you can also go wade fishing along the salty marshes and try your luck at reeling in the fish hiding in them. And there are also a few piers in the area piers that are worth checking out.

As for the species you’ll get to catch, there are many. Bluefish, Croaker, Spot, Flounder, Pompano, Redfish, as well as smaller Sharks can all be targeted from Oregon Inlet shores. You’ll just need to pack your fishing gear, get some bait and your license, and you’ll be good to go.

The calm, shallow waters inside Oregon Inlet are perfect for anglers who like to fish from a kayak. There’s a dedicated kayak launch at the Oregon Inlet Fishing Center that’ll serve as a perfect starting point for this kind of adventure. From there, you’ll get to explore the different creeks and marshes, and catch plenty of different fish.

Some of the fish you’re likely to encounter include Red Drum, Speckled Trout, Black Drum, and Flounder. You’ll just have to watch out for boat traffic, as it can get pretty intense during the summer months. Also, make sure you keep an eye on the weather forecast and avoid heading out on windy days.

Where can you fish in Oregon Inlet?

While there’s good fishing near the inlet itself, there are even more fish holes in the surrounding area and offshore. To give you an idea of the types of fishing grounds you can explore, we’ll cover a few common places to fish close to Oregon Inlet.

In North Carolina, anglers aged 16 and older will need to buy a fishing license. However, an important exception exists for anglers fishing on charter boats. When doing so, you’ll never need to worry about getting a license, since your captain will cover you. There are a few more cases where you might not need to have a license, and you can read about those in our dedicated North Carolina fishing license article.

As you prepare for your Outer Banks fishing trip, it’s also a good idea to check out the fish regulations. Knowing which ones you can keep goes a long way if you’re interested in bringing some dinner home. It could even determine when’s the best time for you to take the trip. For all up-to-date information on fish size and bag limits, visit North Carolina’s Department of Environmental Quality website.

In the summertime peak season, watching all the charter boats pass through Oregon Inlet is a sight to behold. Every morning, you’ll see dozens depart to explore some of the best fishing grounds on the East Coast. To experience the amazing fishing the Outer Banks offer, all you need to do is to choose how you want to fish, and there’ll be a guide to make it happen.

Have you ever been fishing in Oregon Inlet? How about the rest of the Outer Banks? Let us know in the comments below!

Did you miss our previous article…
https://www.hardcoregamefishing.com/big-rockkids-art-contest-winner-announced/