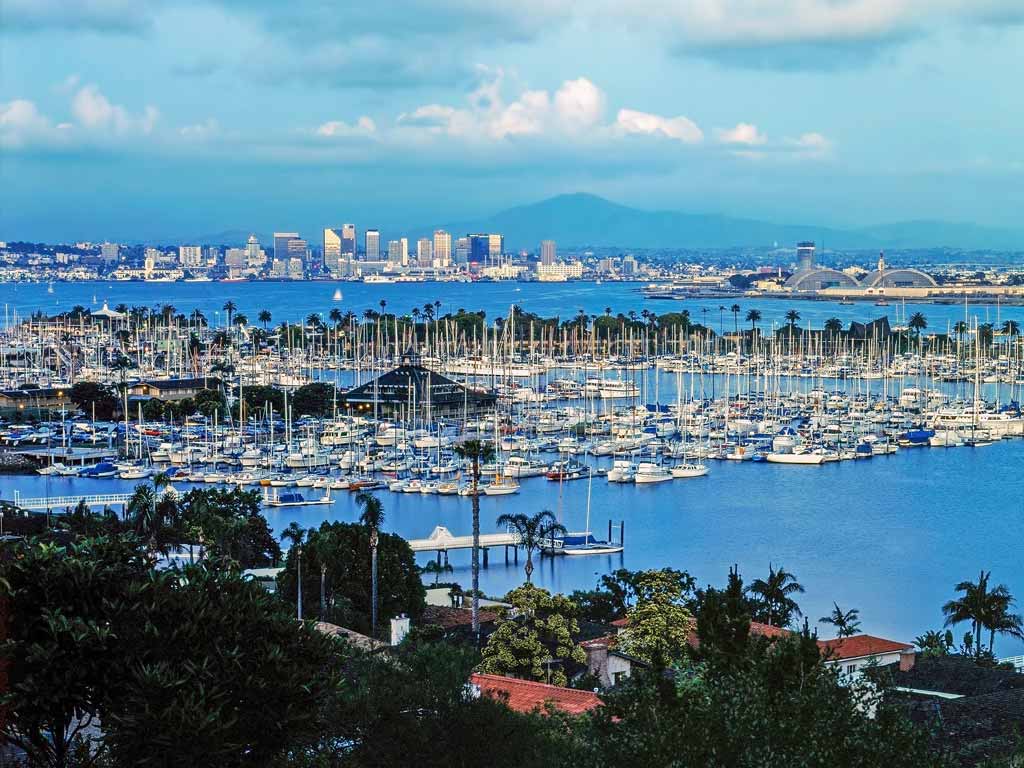 As the first place in California where the European settlers landed, Point Loma separates San Diego Bay from the Pacific Ocean. It’s a historic, yet vibrant neighborhood, featuring stunning cliffs with crashing waves, panoramic views of both the city and the ocean, marinas, restaurants, and plenty of different activities. However, what lies at the very heart of the community is the amazing fishing Point Loma offers.

Thanks to its position, Point Loma has easy access to both the bay and the ocean. Because of this, it’s often the starting point for some of the most thrilling sportfishing adventures on the West Coast. From Point Loma, you’ll have your pick between angling in the calm bays or going as far as Mexico. And either way you turn, you’ll be fishing in extremely productive waters.

If this sounds appealing to you so far, stick with us. We’ll present the species you can catch fishing from this part of San Diego and where to go. You’ll also get to read about some basic regulations to bear in mind if you’re already planning a trip. So let’s dive in.

Which species can I catch fishing in Point Loma?

For those already familiar with the fish you can catch in San Diego, Point Loma features pretty much the same star assembly. The main difference is that you’ll often have an easier time getting to the various spots, especially when heading offshore. We’ll delve into places to fish later on, but for now, let’s take a look at a few favorite species you can catch in these waters.

Halibut and Corvina are two species local anglers love to chase after. They’re abundant in the waters surrounding Point Loma and extremely fun to fish for. Both are found inshore and you can even catch them fishing off one of the piers.

Considering their size, Shortfin Corvina are some of the best fighters you can encounter close to San Diego’s shores. They’re hardy fish, renowned for their aggressive bite and the all-out battle they put up. You can catch Corvina throughout the year, with spring and summer usually being the best seasons. They’re often confused with California Corbina, which you’ll also have the chance to reel in fishing near Point Loma.

While Halibut don’t fight as hard as Corvina, if you hook into an adult, you can expect a good tussle. However, what really makes these fish popular is that they’re simply one of the best-tasting fish in the ocean. Also, California Halibut season is open year-round, making them a solid choice whenever you visit San Diego.

Much like the rest of California, the waters off of Point Loma are home to dozens of species of Rockfish. Some of the common ones you can hook into include Goldeneye, Vermillion, Quillback, Cabezon, and Blue Rockfish. However, whichever one you end up coming across, they’ll typically be fun to fight and delicious to eat.

Rockfish like to lurk near different structure and rock formations on the ocean bottom. Close to shore, you’ll encounter smaller fish, making them ideal targets for beginner anglers or kids. Once you ride 10 and more miles off the coast, expect large Rockfish to start showing up on the sonar.

Before you head out to catch your share of these delicious bottom dwellers, there are two things to keep in mind. The first is that some Rockfish species are endangered and closed for harvesting. So unless you’re fishing with a charter captain, you’ll need to identify your fish carefully. The other is that the Rockfish season for boat-based anglers runs from March to the end of December. So targeting them during winter is a no-go.

Of all the different fish you can chase after in Southern California, you’d be hard-pressed to find one more beloved than Yellowtail. They’re a staple species in these waters, prized for their game qualities. Yellowtail are voracious fish, capable of powerful strikes, hard pulls, and forceful dives that’ll have you holding on to your rod for dear life, especially when you run into a big one.

Their counterpart species – often found in the same waters – are White Seabass. While they’re not quite as tough as Yellowtail, these brutes do put up a good battle, often trying to tangle your line in the kelps. They’re also tricky to seek out at times, as they like to binge eat. This means you’ll have to be at the right place at the right moment to get them to bite.

Most of the time, your best bet to find Yellowtail and White Seabass is to fish the kelp beds. Smaller-sized fish can be found fairly close to shore so it’s not always necessary to hop on a long ride. However, if you’re looking for the “home guard” Yellowtail or trophy Seabass, it’s best to pay a visit to one of San Diego’s offshore islands. There, you’ll get to enjoy what’s maybe the best action on the planet when it comes to these fish.

As you head further and further offshore from Point Loma, you’ll get the opportunity to wrestle Tuna. There are a few different types of these fish running along the coast of California, but most of the time you’ll be on the hunt for Yellowfin and Bluefin Tuna.

Both of these Tuna species are incredible fighters. They’re rated as some of the toughest, most intelligent, and most powerful fish on the planet. Bluefin Tuna are, of course, the greater challenge between the two, simply because they can grow much larger. But although Yellowfin Tuna may be smaller, they’ll battle you with the same ferocity.

To have the chance of reeling in big Tuna, you’ll have to head to the distant offshore waters. Some of the fishing grounds lie around San Clemente, Catalina, and Coronado Islands, but also along the deepwater banks behind them. The Bluefin Tuna season in San Diego generally starts in March and lasts throughout October, while Yellowfin show up in July.

You can treat the species we’ve named so far as only the beginning of what waits in store for you when fishing in Point Loma. San Diego Bay, as well as nearby Mission Bay, are full of Sand and Calico Bass. There are also Sculpin, Bonito, and Leopard Sharks swimming about, and even Bat Ray and Guitarfish.

In the ocean, you’ll often hook into tasty California Sheephead, Lingcod, as well as Thresher, Mako, and Blue Sharks. As the waters get deeper and deeper offshore, you might run across Marlin, Mahi Mahi, and even Swordfish. So if you’ve been wondering why sportfishing is such a big deal in Point Loma, this incredible lineup is your answer.

Naturally, there are a few other things that’ll influence what you end up catching. These include when you go, how much time you have, and your budget. And you’ll also want to work out how to approach these waters. Let’s go over a few different ways you can go fishing around Point Loma.

We’ve touched upon it somewhat already, but Point Loma is famous for its sportfishing fleet. In fact, each spring they organize a celebration to mark the opening of the San Diego sportfishing season. It’s called Port of San Diego’s Day at the Docks.

There are several marinas along the inner side of the peninsula where charter captains run everything from bay to deep sea adventures. Many of them will even offer charters that’ll take you to Mexican waters, usually to fish the prolific Coronado Islands. So whether you want to fish with your family or experience an offshore thrill of a lifetime, there’ll be a guide that can match your wishes.

On a typical fishing charter, your captain will provide you with most of what you’ll need. This saves you the trouble of bringing along your gear or even thinking about what kind of rods to prepare. You’ll also get the added benefit of fishing with a professional. They’ll already know the spots and the techniques to help you land your catch.

If hopping on a boat isn’t really your thing, worry not. There are plenty of spots around where you fish from shore. Point Loma features piers on both the bay and the ocean side. They’re well-maintained and provide plenty of amenities so you can cast your line in peace.

As for the species you’ll get to catch, they’re pretty diverse considering you won’t even be leaving land. You’ll often see Kelp Bass, Sand Bass, Surfperch, Opaleye, Halibut, and even Leopard Sharks bite the end of your line. The fish will differ based on whether you’re fishing the bay or the ocean, but there’ll always be something to catch.

Since the waters of San Diego Bay, as well as Mission Bay to the north, are sheltered from the ocean swell, they’re great to fish from a kayak. Add to that the La Jolla area where kayakers often gather, and you’ll have plenty of grounds to explore.

In terms of species, kayaks will kind of put you in the middle ground of what you can catch from shore and what you can reach by boat. Offshore species are out of the question, of course. However, there are Rockfish holes you can visit on a kayak, plenty of bay Bass to reel in, and Sheephead to put in the cooler.

There are many shops around town where you can rent a kayak if you’re not bringing your own. Just make sure to be careful when you’re out there. Keeping track of the sea conditions is extremely important unless you’d like to mix swimming with your fishing, that is.

If you’ve ever considered diving into the waters and facing your prey up close, San Diego is the perfect place to do so. For beginner spearos or those new to the area, Sunset Cliffs in Point Loma is a great starting spot. You’ll find it just south of Ocean Beach and spearfishing there will put you on Sheephead, Calico Bass, Halibut, and more.

Coastal La Jolla is also renowned for its spearfishing opportunities and generally suitable for most skill levels. If you have some experience under your belt, there are charter boats offering offshore spearfishing where you’ll sometimes even get to spear a Tuna. We’ve written a whole article about spearfishing in San Diego, so you can check that out for more details.

You might’ve noticed that we haven’t discussed the exact places to fish so far in the article. Now’s the time to cover them. While we won’t be able to present them all, you’ll hopefully get a glimpse of what to expect when visiting some of the local fishing grounds. Have a look…

If you’re looking to experience Southern California angling at its best, San Diego’s fishing hub in Point Loma is where you start. The neighborhood hosts all kinds of fishing charters, piers to fish from, tackle shops, and kayak rentals. Of course, once you’re done with your adventure, you can enjoy one of the many amenities, restaurants, and live entertainment available. All in all, whatever you may need as an angler, you’ll be sure to find it in beautiful Point Loma.

Have you ever been fishing around Point Loma? What’s your favorite Southern California species to catch? Let us know in the comments below!