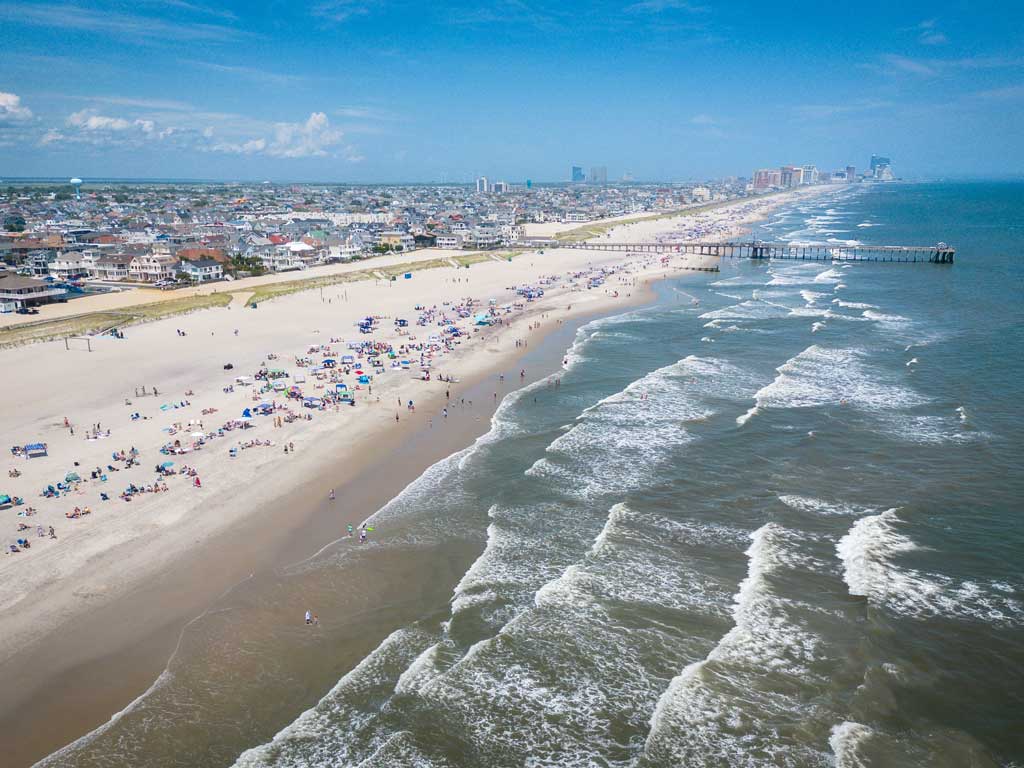 Situated on the scenic Jersey Shore, just across the inlet from Atlantic City, Ocean City is one of the most popular vacation destinations on the East Coast. It’s famous for its guarded beaches, ideal for escaping the everyday hustle and bustle, and catching some rays. But if you’re in the mood for a more active vacation, try fishing in Ocean City, NJ and you’ll soon discover that you’ve stumbled upon one of the best fisheries in this part of the U.S.

So what makes fishing here so good, you ask? Well, the city is located on a barrier island that separates Grand Egg Harbor Bay from the Atlantic Ocean. This means you’ll have access to both the sheltered inshore waters and the deep seas when fishing from Ocean City. Because of this, there’ll be a whole host of fish species to catch, all depending on where you prefer to go.

Throughout this article, we’ll delve deeper into what makes this fishery so amazing. You’ll get to read about the most popular species anglers like to fish for in Ocean City. We’ll also go over a few ways to tackle these waters, as well as where to try your luck. When you’re ready, read on!

What species can I catch fishing in Ocean City?

Let’s focus on the most important things first – the fish you can target out here. Thanks to the quality of these waters, there are many species you’ll get to wrestle with in Ocean City. Let’s go over some of the favorites…

Known as Rockfish along the Atlantic Coast, the tough-fighting Striped Bass is a beloved species in Ocean City. And how could it not be? Stripers are among the most thrilling fish an angler can hope to battle. They’ll tap your bait with mad intent and make blitzing runs to shake off your hook. Once you’ve finally tired them out, Striped Bass meat will serve as a delicious dinner.

In Ocean City, you can catch Stripers both inside the bay and out in the ocean. Their season generally opens at the beginning of March and lasts until the end of December each year. However, the best times to catch these fish are generally between April and July, and then again in October. You’ll often find Striped Bass lurking around different underwater structure, ledges, and bars. Out in the ocean, you’ll find trophy-sized Stripers lurking around reefs.

If you’re looking to put some fish in the freezer, there are hardly better targets in Ocean City than Black Seabass and Tautog. Both are fun to fight and are excellent table fare. Since they’re both bottom fish, they’re great options for beginner anglers. Out of the two, Tautog are a bit more tricky to catch. Their initial bite is often soft, making it more difficult for novice anglers to know when to set the hook.

Another thing that’s great about fishing for these two species is that you can find them close to the coast. They like hanging around jetties, rip-raps, and inlets, which are often accessible even to shoreline anglers. Of course, the big ones lurk in the ocean – near reefs, wrecks, and other bottom structures.

The only thing that you should keep in mind when attempting to target Tautog and Black Seabass is their season. You can fish for them for most of the year, but there are a number of closures. Their size and bag limits also change quite often, so make sure you brush up on them before heading out.

The species we’ve mentioned so far can generally be found fairly close to land. However, if you’re keen on hunting some bigger game, such as Mahi Mahi or Wahoo, you’ll have to set course for the deep seas. Both species visit these waters during summer and you’ll start seeing them once you’re 20 miles offshore.

When it comes to game quality, both Mahi Mahi and Wahoo offer amazing battles. But between the two, Mahi Mahi are easier to catch. When you hook them, they’ll typically fight hard in the beginning. You’ll feel their strength and speed but it’ll last only for a short while because they generally tire quickly.

Wahoo, on the other hand, are among the fastest fish in the ocean. When hooked, Wahoo will take off on lightning-fast runs, making your reel scream like it’s judgment day. If you manage to keep them on and bring them in, you’ll have an angling achievement to take pride in. Also, it’s worth noting that both Mahi Mahi and Wahoo taste absolutely delicious.

What would this list look like if we missed out on mentioning the biggest, toughest, most sought-after fish in this part of the Atlantic – Bluefin Tuna? In terms of catch difficulty, they sit at the very top of the list. Bluefins are incredibly intelligent and elusive. They also change their moving patterns all the time, making it hard to predict when and where they’ll show up.

If you do manage to hook one, get ready for the battle of a lifetime. Giant Bluefin Tuna can fight for hours on end and push anglers to their physical and mental limits. Even smaller ones pull incredibly hard, so you can always count on them presenting you with a challenge.

Besides Bluefin Tuna, you’ll also get the chance to reel their Yellowfin cousins while deep sea fishing out of Ocean City. Generally, you’ll be able to target both throughout summer and fall. Just be ready to head far offshore, as the hottest action takes place along the distant underwater canyons.

We’ve presented a few of our favorites, but these fish are far from the only species you can catch in Ocean City. Close to shore, you can fish for Fluke, Bluefish, Triggerfish, Spanish Mackerel, Weakfish, and a whole lot more. There’s so much choice that you’ll pretty much always have something to chase after.

Offshore, in the same fishing grounds where you’ll look for Tuna, there are several other pelagics you might run across. These include Blue and White Marlin, as well as Swordfish that hide in the canyons’ depths. Along the way, you could even encounter the likes of Mako, Thresher, and Blue Sharks, as well as Cobia, Bonito, False Albacore, and more. With such a lineup, it’s all up to what you want to aim for first.

How do I go fishing in Ocean City?

Before you start planning your Ocean City fishing trip, let’s look at some of the ways you can approach these waters. After all, it’s what will determine the fish you’ll end up catching.

Fishing from a boat will give you by far the most variety when exploring Ocean City’s waters. From angling in the back bays to wrestling deep ocean giants, anything becomes possible with the right vessel. And unless you can operate a watercraft yourself, the easiest way to have a boat fishing adventure is to hook up with one of the charter captains in Ocean City.

These seasoned guides will not only provide you with the boat and the equipment you’ll need for your trip, but they know these waters better than anyone else. This is especially important if you plan on heading offshore. There’s simply no better option than doing it with a captain who already knows where the fish might be and how to keep you safe throughout the journey.

Of course, there’s plenty of fish to catch even if you just decide to fish from Ocean City’s shores. There are several piers both on the ocean side and overlooking the Grand Egg Harbor Bay. In addition to this, there are different beaches strung along this part of the Atlantic Coast where you can do some surf fishing.

Some of the fish you can expect to catch when pier or surf fishing in Ocean City are Fluke, Weakfish, Striped Bass, Mackerel, along with the likes of Tautog and Bluefish. It’s even possible to do some crabbing and catch your fill of delicious Blue Crab. You’ll just need to bring your equipment or rent it, and make sure you register for saltwater fishing – more on that later!

One other way you can fish these waters is aboard a kayak. Ocean City’s back bays feature calm, sheltered waters that lend themselves extremely well to this type of fishing. A kayak will allow you to explore the otherwise inaccessible nooks and crannies both within the bay and along the mouth of the Grand Egg Harbor River.

There are, naturally, many different fish you could run into while kayak fishing in Ocean City. Striped Bass, Spanish Mackerel, Fluke, Tautog, and Bluefish are just some of them. If you don’t have your own, there are several places in the area where you can rent a kayak. Just make sure to pay attention to the weather, as a sudden shift could make your angling plans turn sour.

When you’ve decided on the fish you want to catch and the way you want to cast your line in Ocean City, it’s time to take a look at where exactly to visit. Of course, if you’re fishing aboard a charter, the captain will usually advise you on where the best bite is. However, knowing where the hotspots are will still help you set the correct expectations for your trip.

Here’s what’s interesting about saltwater fishing in Ocean City, as well as elsewhere in New Jersey – you don’t need a license. New Jersey only requires you to complete this free registration process in order to fish in saltwater. On charters, the captain is required to register you, saving you some time. Just keep in mind that there are a few additional permits, such as one for harvesting Crabs, that you may consider purchasing. You can read more on those in our dedicated New Jersey fishing license article.

The only other thing you need to pay attention to are the size and bag limits for each fish you intend on catching. These can change from year to year and it’s best to get familiar with them as you plan your trip. For all up-to-date information, you can pay a visit to the New Jersey Department of Environmental Protection website.

By now, we hope you have a decent idea of just how good fishing in this part of New Jersey is. Whether it’s jumbo Striped Bass, tasty reef fish, or big Bluefin Tuna you’re after, it’s all within reach in Ocean City, NJ. Not to mention all the things you can enjoy in the city itself, the beautiful beaches, the scenic boardwalk, and all the different activities. What’s not to love?

Have you ever been fishing in Ocean City, NJ? What’s your favorite species to target? Let us know in the comments below!