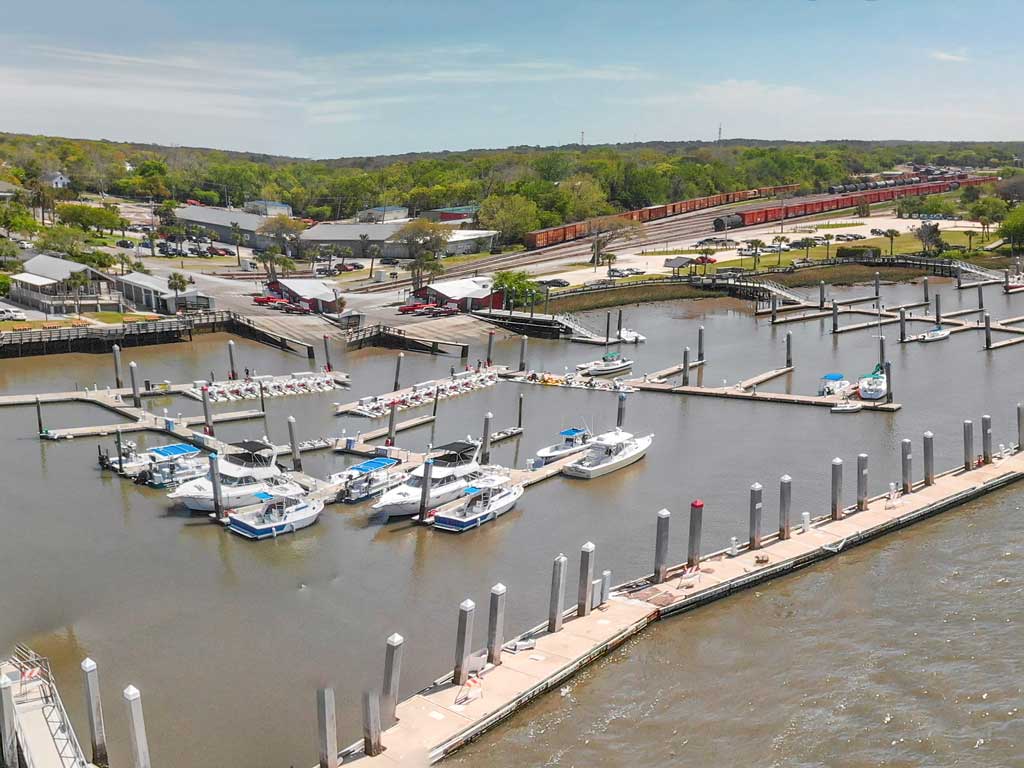 Known as the “Isle of 8 Flags” after the eight nations that have flown their flags on Amelia Island throughout history, Fernandina Beach is a place with a rich backstory. It’s also famous for its pristine coastline, crystal clear waters, and beautiful ocean scenery. However, almost all of that pales in comparison when compared to the kind of excitement you’ll find when fishing in Fernandina Beach.

The amazing fishing Fernandina Beach offers is, in large part, owed to Amelia Island’s unique position. To the east, it faces the ocean and the prolific Gulf Stream. But behind the island, there’s an intertwining network of rivers and creeks. These calm waters feature some of the best inshore angling you can hope to find.

In today’s article, we’ll show you a glimpse of the different fisheries you can explore in this part of Florida. You’ll learn about the most popular fish you can target in Fernandina Beach, as well as where and how to go about doing so. Towards the end of the article, we’ll cover a few fishing regulations to get you prepped for your trip. So let’s get started!

Which species can I catch fishing in Fernandina Beach?

The fishing grounds surrounding Fernandina Beach are extremely diverse. So it comes as no surprise that there are many different fish you’ll get to reel in out here. Thanks to Florida’s warm climate, the action takes place year-round, so it all depends on what you want to catch. Let’s have a look at a few local favorites…

Much like elsewhere around Florida, the sight of a tailing Redfish is something Fernandina Beach anglers simply love. Both brawny and beautiful, these fish are counted as some of the best fighters you can find close to shore. Redfish are also very eager biters, making it all about nailing that perfect cast and presenting the bait to them.

In Fernandina Beach, you’ll find Redfish hiding around inlets, the tidal parts of St. Marys River, and the local jetties. You can catch them throughout the year but the big Bull Reds usually show up in late summer and fall. To entice the Redfish bite, you can use live bait such as mullet, pilchard, shrimp, or crab. Alternatively, try artificial jigs, plugs, or weedless spoons.

While we’re on the topic of inshore fish, it’s hard to imagine a more fearsome fighter than Tarpon. Also known as Silver Kings, these prehistoric fish have been prowling these waters for tens of millions of years.

They’re armed with tough, bony mouths that are difficult to penetrate with a hook. And if you do get a bite, you’ll be facing one of the most powerful and acrobatic fish alive. Tarpon pull with such strength that anglers often double over, assuming a bent position that’s jokingly called “bowing to the King”. Fighting a Tarpon is almost like a rite of passage, as well as an experience you’ll treasure for a lifetime.

The best time to catch Tarpon on Amelia Island is during the summer months, especially in July and August. However, it’s possible to catch them all the way until mid-fall. Shallow bars, deep sloughs, and bridges are magnets for these fish. Seek out those and you’re likely to run into some Tarpon.

If you decide to leave Fernandina Beach behind and head into the ocean, you’ll discover that there’s plenty of table fare to reel in. Of course, the most prized among Amelia Island’s food fish is the famous Red Snapper.

Snappers are extremely fun to catch and make for suitable targets for both beginner and seasoned anglers. However, the real reason why people are so obsessed with them is that they’re one of the tastiest fish out there. Red Snapper season also generally opens only once a year, during summer, inflicting a bad case of FOMO on any angler who hasn’t booked a Snapper trip yet.

To get in on the Red Snapper action in Amelia Island, you’ll have to make a journey into the Atlantic. You’ll typically find Snapper lurking around nearshore reefs and wrecks. The big ones, however, are often found further offshore, in deeper and less pressured waters.

As you head further and further offshore, you’ll start running across different pelagic fish, such as Kingfish and Mahi Mahi. These two species will be among your main targets whenever you hop on a trolling trip. They’re both abundant in these waters, especially in the summer.

Mahi Mahi are beloved for their amazing taste. They’re also great fighters, especially if you hook into a big one. However, they tend to run low on stamina, making the action exciting but short. What’s also interesting about Mahi is that they’re fast growers. This means encountering big ones isn’t that rare of an occasion. You’ll often find them feasting on bait around offshore weed lines and different floating debris.

Kingfish are also an extremely popular species in these waters. They’re decent table fare, especially blackened, and battling them will definitely get your adrenaline pumping. During peak season, you’ll find them within a few miles offshore, though the big ones lurk further out.

There are several more species you’ll come across in the coastal waters of Amelia Island, as well as in the river systems behind it. These include Spotted Seatrout, Flounder, Black Drum, Tripletail, Whiting, Jack Crevalle, and more. With such a lineup, there’ll always be fish to reel in even without heading offshore.

But if you do set out to explore the deeper waters, you’ll find some amazing bottom fishing, as well as plenty of pelagic action. On the reefs, you’ll often put lots of delicious Grouper and Triggerfish in the cooler. And if you decide to do some trolling offshore, you’ll see Blackfin Tuna, Wahoo, and even Sailfish take the bait. If all of these aren’t enough, there’s always the possibility of Barracuda, Cobia, or Sharks showing up.

How to Go Fishing in Fernandina Beach

Depending on your budget, the fish you want to catch, and what kind of experience you’d like to have on the water, there are several ways to go fishing in Fernandina Beach. To give you an idea of what you can expect, we’ll go over a few of the most common ones.

Since there are so many different waters to cover around Amelia Island, having a boat goes a long way in terms of efficiency. First of all, you’ll get the option to switch between spots with speed. Secondly, you’ll be able to target more than one species depending on how long you can stay on the water.

Now, unless you can operate a boat yourself, hopping on a charter is the simplest way to fish from a vessel. You’ll find all kinds of charter captains in Fernandina Beach. They range from those offering family-friendly outings, to others that can take you on the wildest offshore adventures in federal waters.

Besides getting to make use of your captain’s vessel, they’ll usually provide all the necessary fishing gear for your trip. Your captain will also cover you with their 6-pack license, saving you the trouble of obtaining your own. Finally, an experienced captain will know how the fish move and where to take you for the most productive day out.

If you’re not planning to fish from a boat, there’s plenty of action you can get off Amelia Island coasts. Shore fishing is a great way to enjoy the local scenery and mingle with other anglers fishing from beaches and docks. Of course, you’ll get the chance to reel in all kinds of fish as well.

Plenty of different species lurk in the surf, near jetties, and bridges. Just some fish you could hook into include Redfish, Spotted Seatrout, Sheepshead, Black Drum, Whiting, and even Tarpon. You just have to pack your rods and reels (or rent them), get some bait and your fishing license, and you’ll be good to go.

A third way to experience the nature surrounding Fernandina Beach and catch fish while you’re at it is to hop on a kayak. If you remember, we mentioned there are different rivers and creeks right west of Amelia Island. These, together with the salt marshes, bridges, and jetties you’ll find in the area, make for fantastic fishing spots to hit on a kayak.

Since you’ll be fishing inshore, the species you can expect to catch resemble those we mentioned in the previous section. However, the added benefit of having a kayak is that you’ll be able to reach the more secluded spots. Also, you’ll get to sneak up on fish silently. The only thing you’ll have to pay close attention to is the weather. That way, you’ll avoid being caught out there if things take a turn for the worst.

After you’ve decided how you want to fish the Fernandina Beach waters, it’s time to consider where you want to go. There are numerous spots you can explore whether you’re fishing from shore or a vessel. If you’re planning to hop on a charter boat, your captain will usually take you to where the best bite is. Still, here are a few noteworthy spots you can visit.

We mentioned fishing licenses earlier in the article, but here’s a quick breakdown of how it works. If you’re fishing aboard one of the many Fernandina Beach charters, they’ll cover you with their permits, meaning you won’t have to buy your own. Otherwise, anglers 16 and older will need to obtain saltwater fishing licenses. There are a few exceptions to the rule and you can check if you qualify in our dedicated Florida fishing license guide.

In addition to this, it’s always a good idea to get familiar with fish seasons, as well as the size and bag limits of each species. This way, you’ll know what you’ll be able to chase after at the time of your trip, as well as which species you have to release safely. The regulations can vary from year to year, but you can get up-to-date information on the FWC website.

With plenty of natural charm as well as fishing that’s absolutely off the chart, you really can’t go wrong when visiting Fernandina Beach. Whether you’re a beginner angler looking to learn more about fishing or a seasoned angler hunting for your next trophy, Amelia Island offers both. It’s all in the palm of your hand! All that’s left is to plan your adventure.

Have you ever been fishing in Fernandina Beach? What are your favorite species to target? Let us know in the comments below!