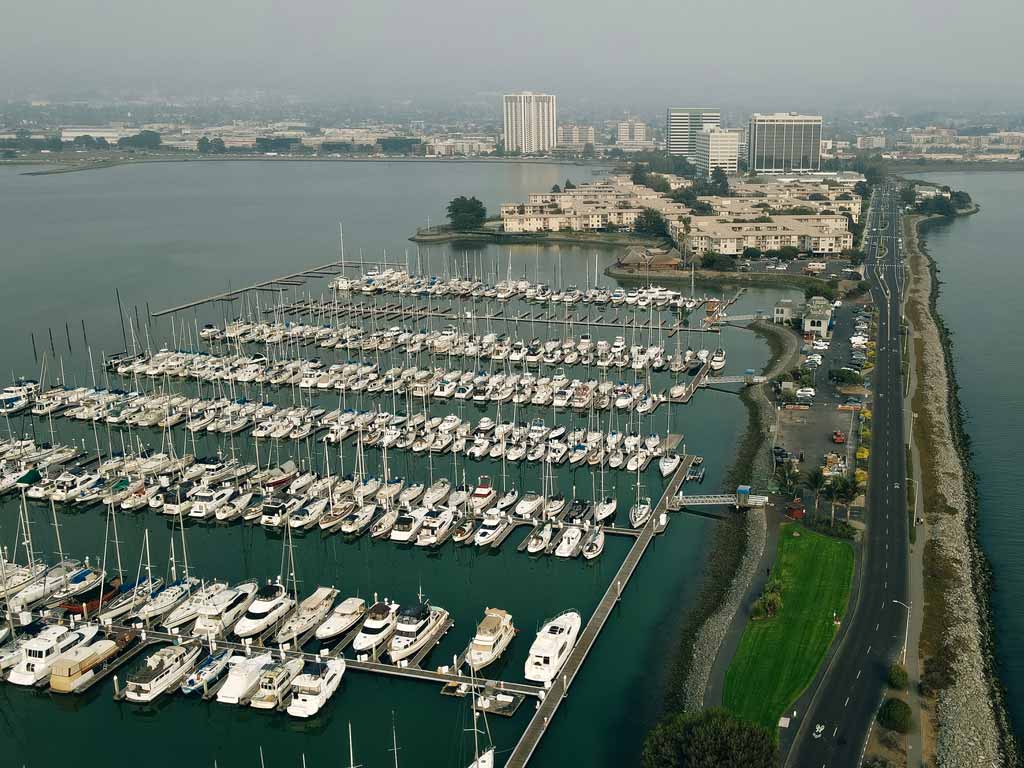 Nestled between Oakland and Berkeley, Emeryville is a small place with plenty to offer to an angler. It’s situated in the very heart of San Francisco Bay, giving you a fantastic starting point to explore this entire fishery. So although the city itself is only the size of roughly one square mile, fishing in Emeryville and the grounds you’ll have access to definitely shouldn’t be overlooked.

If you head straight west from Emeryville’s marina, you’ll be at the Golden Gate Bridge in no time. Go north instead, and you’ll get to fish San Pablo Bay and the Sacramento River Delta. To the south, you can venture deeper into San Francisco Bay and try your luck for numerous species.

In this article, we’ll try and shine some light on this exquisite fishery. So if you’re planning on visiting the Emeryville area, this is where you’ll find out what fish you can catch. We’ll also cover some spots to visit and a few different ways to fish. When you’re ready, scroll down!

Which species can I catch fishing in Emeryville?

We’ll start by covering some of the fish you can catch in the waters surrounding Emeryville. There’s a good variety of both eating fish and others you’ll simply catch for sport. So let’s go over a few you’ll have the chance to run into.

Famous for their divine taste, Halibut are an ever-popular target throughout the West Coast. They’re fun to catch, putting up a fairly easy but still exciting battle. Thanks to this, ‘Buts are the ideal species for beginners and young anglers to practice their skills on.

California Halibut employ an ambush strategy when hunting for prey. They lie flat on the bottom, melding with it while they wait for unsuspecting food to come by. As luck would have it, much of San Francisco Bay’s bottom is mud, giving them lots of hiding surface. However, for you as an angler, this just means you’ll have more opportunities to present your bait to the lurking Halibut and turn it into their last supper.

What’s also worth noting is that there’s no closed season when it comes to fishing for California Halibut. Since this is the case, you’ll have a shot at catching them whenever you decide to visit.

Around Emeryville, you’ll also get the opportunity to hook into some Striped Bass. Stripers are decent fighters, especially if you forego heavier tackle and opt for light gear. When hooked, you’ll usually feel a few soft taps, then an aggressive hit before they go on a blitzing run. Once they’ve exhausted their stamina, it’s all about getting them to the boat.

In San Francisco Bay and throughout the California Delta, Striped Bass are found year-round. In spring, you’ll often catch them upriver, in the delta, where they go to spawn. During summer and fall, you’ll see Striped Bass spread throughout the bay, often lurking around rocky reefs. Sometimes, they’ll even head out of the bay. That’s when you’ll hear anglers telling stories of catching them in the surf, along San Francisco’s ocean coast.

The only time when Striper fishing slows down is when it gets cold, meaning they’re solid targets for most of the year but not winter. As for techniques, there are a number of them you can employ to reel these fish in. Aboard charter boats, you’ll typically troll or drift with live bait to entice the bite.

If reeling in all the normal fish has somehow lost its spark for you, you’ll be glad to know that you can have your own little Jeremy Wade adventure in these waters. The river monsters that you’ll face here are called White Sturgeon.

These ancient fish boast a prehistoric appearance, featuring bony, dinosaur-like ridges all over their backs. Also, Sturgeon are the largest freshwater species, capable of reaching lengths of up to 20 feet. Of course, it’s almost impossible to run into one of those, though you may get the chance to wrestle some in the 150 lb range.

Although you can catch them right around Emeryville, most of the Sturgeon fishing is done north in San Pablo Bay and in the delta. These bottom-dwelling monsters like murky waters and estuaries. To get them to bite, you’ll anchor upriver from where you see a prospective hole, lower the smelliest fresh bait you have in the water, and hope they sniff it out. The best time to attempt this? Winter.

They’re called Kings because they’re the biggest in their family, but this moniker could easily be used to describe the supreme way Chinook Salmon fight. They’re intelligent fish that know how to use the current to make the struggle harder for you. If you don’t keep them moving, they’ll find a place to rest, making it even more difficult to tire them out. Oh, and let’s not forget that they’re strong and heavy, so you’ll really need to work to bring them in.

All of this just makes the action more thrilling and the accomplishment of successfully catching a King that much better. And if you hook into a keeper, you’ll have one of the best-tasting fish ready for the dinner table.

The Salmon action around Emeryville and the surrounding waters starts in spring, along the NorCal ocean shores and in the Golden Gate Bridge area. The fish will be here throughout early summer, before eventually moving into San Francisco Bay and heading upstream to spawn.

The Chinook fishing can last throughout October, giving you a large period of time when you can visit the area and find these fish. There are two caveats though. One is that you’ll have to ride out to them if they’re not in the bay and the other is that the regulations don’t always allow you to harvest these fish.

We could go on and cover all the deep sea species you can catch once you leave San Francisco Bay and hit the Pacific, but there’s a separate article if you’re interested in reading about that. Around Emeryville itself, though, there are more fish you can catch in addition to the ones we listed thus far.

There are Leopard, Tope, and Smoothound Sharks swimming in the bay. You can find Rockfish and Lingcod close to the Golden Gate Bridge. Occasionally, you might even hook into the elusive White Seabass. And, for a special treat, you can even go crabbing when the season opens in November. On the whole, there’s a lot of good sportfishing you can do around Emeryville, even if you only stick to the Bay Area.

How to Go Fishing in Emeryville

Since we’ve gone over some of the amazing fish you can catch in San Francisco Bay and the wider delta, it’s worth noting that there are different methods to this fishery’s madness. The approach you take will significantly influence the fish you’ll have available. For those wondering how, we’ll break down the different ways you can fish in Emeryville below.

Consider the size of the bay, the number of rivers flowing into it, and even the possibility of going out into the ocean. The local fishing grounds suddenly look pretty expansive, right? Because of this, the most efficient way to fish the Emeryville waters is to hop on a charter boat.

Besides the practicality of having a vessel you can easily navigate with, you’ll also have your guide’s experience working in your favor. The fish move around and unless you already know the bay well and you’re reading this article to kill some time, fishing with someone who knows the waters pays off.

Your guide will know which species are in season, they’ll know what fish you can or cannot keep, and where to take you. Most of the time, they’ll even provide you with fishing equipment or offer rental services.

For the more adventurous anglers out there, there’s also the option of tackling these waters aboard a kayak. You’ll need a steady vessel and a safety light or two so the boaters can spot you, but it’s possible to fish these waters from a kayak.

Not only that, but you can also use your kayak to get around and search for Crabs during their season. It’s really the main advantage of having a kayak, you can pretty much go anywhere. In terms of fish you can expect to catch, it’s probably wise to avoid hooking into Sturgeon, but Halibut, Bass, and other smaller fish are all good targets.

Emeryville also features an 880-foot-long pier near the marina. It’s public, meaning you can visit it and fish there without a license. There’s also a small pier in Shorebird Park where you can fish, though it’s unknown whether you need a license there or not.

When pier fishing out here, you can expect to land Striped Bass, Bat Ray, an occasional Shark, and Halibut. You’ll just need to rent or travel with your fishing gear, pick up some bait at the marina, and you’ll be good to go.

We’ve already kind of established why Emeryville is such a great starting point for bay fishing trips. It’s in a central location, giving anglers plenty of choices and paths to take. So let’s delve into some of the areas you can explore out here.

We started the article by saying how Emeryville is a small city with plenty to offer to an angler. After reading through the text, would you agree with that? It might not be a destination you go out of your way to visit, at least not until Pixar starts offering tours. However, if you’re already in the area, you might as well make the most of it and hit the waters, because there’s definitely lots of fish to catch.

Have you ever been fishing in Emeryville? What’s your favorite Bay Area fish to target? Hit the comments and let us know!

The post Fishing in Emeryville: The Complete Guide appeared first on FishingBooker Blog.