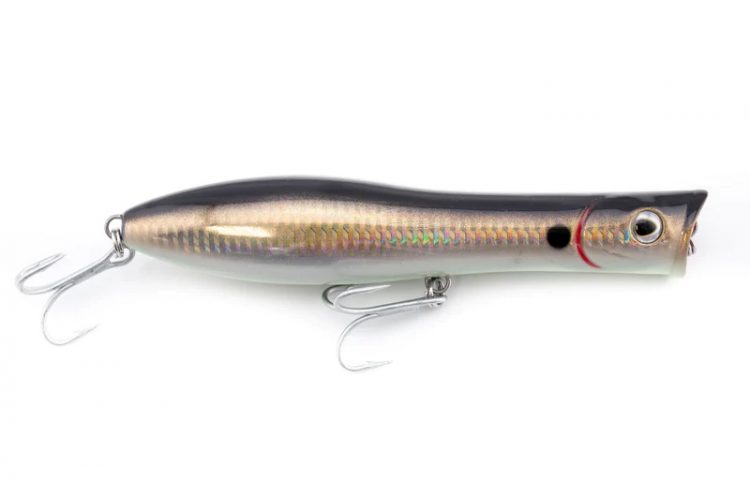 Bluefish, the most aggressive inshore gamefish in the northeast, are known among surfcasters, boaters and fly anglers as the warriors of the water; whether trolling over wrecks, plugging the inlets, or throwing flies on the flats, bluefish dominate much of the saltwater scene from April to October. Depending on an angler’s location, soft plastics, poppers, spooks, and metals are all on the menu, but discerning which option the blues will take a liking to isn’t always easy. They gorge on everything from silversides to squid, so we’ve compiled the best bluefish lures that have stood both the test of time and their insatiable appetites.

This long-bodied popper can be worked like a pencil and a traditional popper, giving fishermen the versatility to adjust their presentation to what the bluefish want on that day. Extra-loud rattles and a cupped face create explosive and audible pops, while heavy duty split rings and extremely durable hard plastic construction are built to withstand the power of gator blues in the surf or in open water.

What makes this a top pick for bluefish, however, is the hard-plastic construction that survives repeated attacks from the teeth of big blues. The Talkin’ Popper comes in an array of colors, but for blues, it can be tough to beat the yellow/red head, squid, and electro school bus colors.

This aerodynamic plug is a long-standing staple among New England surfcasters. Bob Simon invented the Ranger in the 1970’s on his quest for bluefish around Cape Cod and its surrounding islands, where squid fled schools of big bluefish each spring.

With a thick rounded end, its dense tail weight sends the plug soaring into the strike zone, where a heavy duty, single Mustad #3407 7/0 hook penetrates the mighty maw of feeding blues and allows for quick and simple dehooking.

On moderate to fast retrieves, the Ranger skips and spits across the surface, like an escaping squid.

In the 1970’s and 80’s, these basic metal jigs— popularized by Ava Jigs— became a staple among bluefish anglers on party boats in New Jersey and the Long Island Sound for their durability and quick sinking design; ever since, they have filled the tackle boxes of boat fishermen and surfcasters when bluefish are abundant. Their slim profile and metallic shine mimic a wide variety of smaller baitfish like sand eels and silversides, and their shape generates a unique flutter action when vertically jigged. They come in an array of weights and lengths and are frequently fitted with a tube- or bucktail-dressed trailer hook.

When bluefish are holding deep in inlets or feeding subsurface, the bucktail jig is a deadly presentation. The slower sinking and extra action provided by the dense bucktail hair on bucktails like the Andrus Jetty Caster tempts bluefish that aren’t willing to chase down a faster moving metal, which often happens early in the season when the blues first hit the inlets. The downside is that the bluefish’s teeth will eventually shred the bucktail hair.

This classic spoon has a wide profile and a thin body that gives it an enticing kick and flash on a moderate or slow retrieve. It doesn’t cast as well as more compact spoons, but can be worked higher in the water column at a slower retrieve. It can also be vertically jigged effectively, as the Krocodile’s shape creates a tantalizing flutter on the fall. 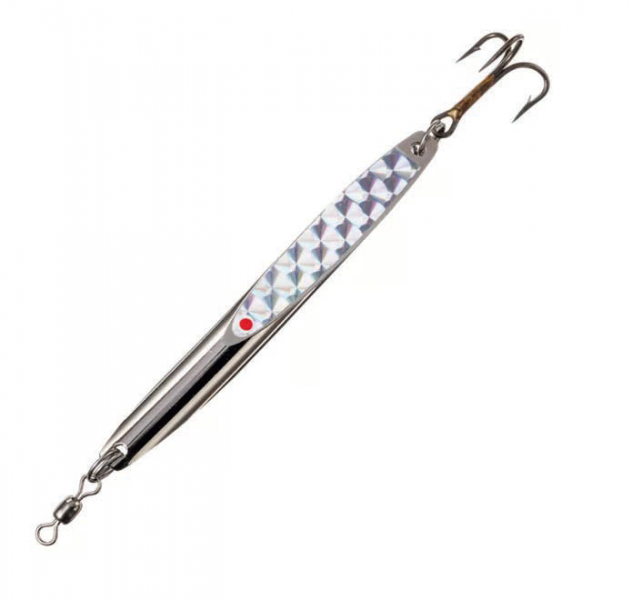 The heavy brass construction and slim profile of the Deadly Dick make it a long casting lure, while the shape causes it to kick and swim wildly on a moderate to fast retrieve.

It features a nickel barrel swivel line tie that allows the lure to twist and swim free of tangles, and its slim profile closely resembles the body types of sand eels or silversides. 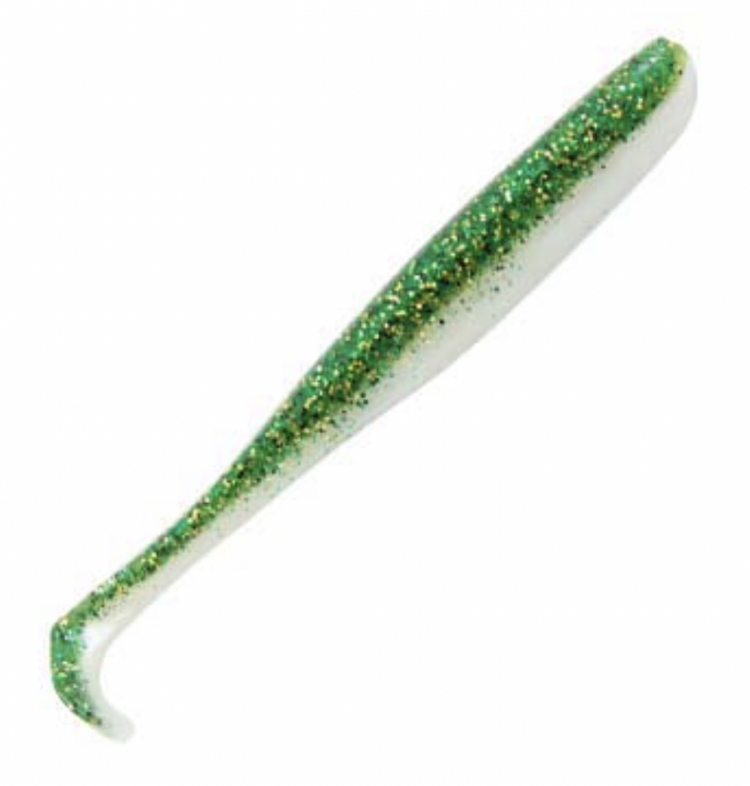 Using their patented ElaZtech formula, Z-Man developed a supersized 8-inch paddletail swimbait that can be withstand the ferocious takes and jagged teeth of bluefish.

It can be rigged on a HeadlockZ jighead or ChinlockZ belly-weighted weedless hook to grab the attention of nearby blues whether they’re feeding on top or down deep.

On top of the lure’s soft, easily crushable body, the thud of the kicking paddletail furthers its realistic appearance while creating an audible thumping sound underwater to make any bluefish with an appetite aware of its presence.

During the squid run each spring, there are few lures as productive as a big, bright and tough soft plastic with a life-like profile and swimming action.

Z-Man’s extra-large StreakZ feature their ElaZtech material and were designed with a slightly tapered split-tail design that, along with a detailed gill plate, creates an appetizing underwater appearance to yellow-eyed demons.

The XL StreakZ can be rigged on a HeadlockZ jig and worked lower in the column for suspended blues, or retrieved as a soft-plastic spook on the surface with a wide-gap ChinlockZ swimbait hook. When rigged weedless, anglers won’t have to sacrifice castability due to the lures ability to absorb salt, which increases its density and works with the belly-weighted hook to make longer casts.

Developed by legendary New Jersey saltwater fly angler and fly tyer, Bob Popovics, Bob’s Banger has a buoyant foam cylinder body wrapped with flash that keeps it floating like a stunned baitfish on the surface, leading to explosive strikes between the gurgling topwater pops it creates when stripped. A 4x Mustad 34011 saltwater hook provides tough hardware and a long shank that is typically dressed with white or chartreuse bucktail hair and Hareline krystal flash for longer profile that creates additional action and light reflection.

In late summer, when the bays fill up with juvenile bluefish, the 1/8-ounce Kastmaster fished on ultralight tackle can provide fun fishing for anglers of all ages. The small Kastmaster is a good match to the baby spearing, anchovies, and peanut bunker that snapper blues terrorize in the backwaters. It casts well on light gear and swims with an enticing kick high in the water column on a moderate retrieve. The silver color is best, but silver/blue is also effective.

Your grandfather’s favorite bluefish lures. These two classic bluefish trolling lures are too similar to rank one over the other. The main difference between the popularity of the two seems to be regional. In New Jersey, fishermen favored the Pony Tail, while New England fishermen trolled the Hoochie.

The hoochie consists of a vinyl squid skirt over a weighted head and wire or chain attached to the hook. As it trolls, the squid snakes through the water as the skirt flutters, attracting the attention of blues, while the wire leader to the hook prevents bite-offs.

The pony tail, most famously made by Andrus Lures, had a weighted head, but instead of a vinyl squid skirt, it was made with synthetic hair to give the lure its action. The synthetic hair was more durable and longer than bucktail hair, making it better suited for bluefish lures.

Both lures are still effective today, but can be difficult to find, though a good bet would be Fishing Flea Markets and Garage Sales.

With its frantic swimming action and realistic patterns from mackerel to menhaden, the X-Rap Magnum is armed with heavy–duty hardware that makes it a reliable deep-diver for bluefish. While there are models capable of diving to 40 feet, for bluefish, the XRMag15 and XRMAG20 models will be the best bets. Swapping the trebles for inline singles will make unhooking the toothy bluefish easier on the angler and the fish.

The post The 13 Best Bluefish Lures first appeared on On The Water.

The post The 13 Best Bluefish Lures appeared first on On The Water.

Did you miss our previous article…
https://www.hardcoregamefishing.com/coldwater-cows/