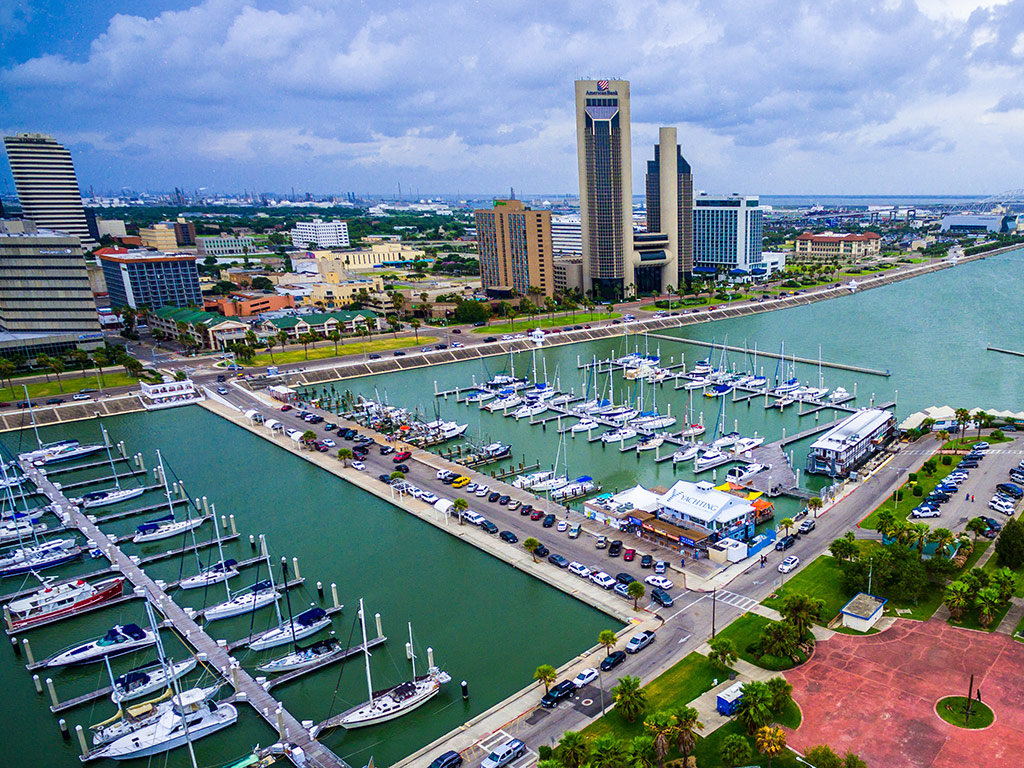 The Gulf of Mexico is well-known for its superb fishing, and the “Lone Star State” is no exception. From the deep blue waters of the Gulf to thousands of man-made lakes further inland, you’ll be spoiled for choice. The aim of this article is to walk you through the different fishing seasons Texas has to offer so you can plan the trip of your dreams.

Before we dive into the nitty-gritty of every month in Texas, we’ll start off with a handy best-hits selection. Below you’ll find a list of the most popular Texan fish species and when you can go after each of them. One tick means you’re ready to go, while two mean it’s as good as it gets and you’ll want to make it a priority.

What to expect from fishing seasons in Texas?

Now that you’ve got the basics covered, it’s time for the full play-by-play. As you saw, there’s never a bad time to go fishing in Texas, so it boils down to what you’re looking to catch. To make your deliberations easier, we’ll go through the whole year one month and a time across the entirety of America’s second-biggest state. Without further ado, let’s jump in:

The winter lurch is probably the slowest Texas fishing gets throughout the year. Be that as it may, it’s still a great time for inshore Redfish and Trout fishing. There are plenty of big Specks waiting all over the Coastal Bend, and if you’re lucky enough you can bag yourself a 10-pounder or two. If more angling is part of your New Year’s resolution, this is the perfect way to make a running start.

Another strong option in January is boating a bunch of Catfish at the Choke Canyon Reservoir in South Texas. You’ll be up against Blue and Channel Catfish, with anglers commonly reeling in up to a dozen of them over the course of a single trip. Look for them in more shallow waters of 8 feet or less, make sure you’re stocked up on natural and cut bait, and we expect you’ll have your hands full.

February is not much different from the start of the year, so we recommend sticking with the plentiful freshwater fishing found all over Texas. One of the good things about fishing during the quieter months is that you can sit back, relax, and enjoy the peace and natural beauty all around you. Oh, and the fishing’s pretty good too.

It might be cold outside, but Crappie fishing is definitely on fire this time of year. Location-wise, you won’t go wrong with hotspots like Lake Stamford or the Toledo Bend Reservoir. Clocking in at almost 200,000 acres, the latter is actually the biggest artificial lake in the whole state. Other than Crappie, you can also go up against Catfish and Bass.

Any Texan worth their salt knows that March is big Bass month! Specifically, Largemouth Bass. As the waters start to warm up, all these lunkers will head towards more shallow habitats where you’ll hopefully be waiting for them rod-in-hand. Keep in mind that some fisheries have later spawn periods than others, and the magic number you’re looking for is a water temperature of around 65 degrees.

If you’re more interested in saltwater fishing, then there’s plenty to look forward to this month. Large Redfish will be congregating by the hundreds along jetties and in the deeper bays and channels. Team up with a local guide and you’ll be bagging these “Big Uglies” before you know it.

April is when fishing in Texas ramps up big time. The fish are on the move across the country, and pretty much any angling adventure is on the menu. Those of you itching for an offshore adventure will finally get your chance. From Mahi Mahi and Kingfish to Snappers, Groupers, and the odd Billfish, take your pick!

But as far as we’re concerned, backcountry fishing around this time is the real deal. A lot of Redfish will be flocking over to estuaries and brackish waters, so why not make the best of it? One of the best places for this has to be the Laguna Madre area. Suitable for beginners and pros alike, it’s a place that’s fun for the whole family.

More of the same is the name of the game, but you won’t find us complaining. In fact, for some anglers, this is the highlight of the year. The weather is great, the fishing even better, and the crowds are still light compared to the upcoming summer frenzy. Together with the popular Redfish, the inshore and nearshore waters are brimming with Black Drum, Flounder, Cobia, Jack Crevalle, and others.

On the more brackish side of things, you can expect Tarpon to make an appearance around this time of year. Anglers looking to test their mettle against the “Silver King” should head down to Corpus Christi or Port O’Connor and see if they’ve got what it takes. In a similar vein you also have Ladyfish, sometimes called “the poor man’s Tarpon.” Not the most flattering nickname, but rest assured they’ll put up a good fight.

There’s no sense in beating around the bush, so we’ll just say it – one of the most important parts of Texas summer fishing is the federal Red Snapper season opening. The state is blessed with plentiful reefs and wrecks that are perfect for targeting these delicious fish. Thanks to this, Snapper fishing in Texas can be on par with heavyweights like Florida and Alabama. And you know what they say, everything is bigger in Texas.

Of course, the deep blue has plenty more to offer. The start of summer means Sailfish charters are in full swing. These superstars are the ultimate challenge for any brave angler willing to put in the hard work. Port Aransas is the state’s main billfishing hub, making it the best place to visit if that’s your jam.

Tuna fishing in Texas is a year-round activity, but July marks the start of its peak season. The most common species of Tuna in these waters are Blackfins. While not as big as their Bluefin and Yellowfin cousins, they can still grow up to a couple of dozen pounds given enough time. If you’re running on a budget, cities like Galveston offer party boat fishing options that focus on Blackfin Tuna in particular.

Returning to freshwater fishing for a moment, it’s also worth mentioning that this is a fantastic time for Bass fishing. Stripers and Black Bass will keep you busy all day long in fisheries like Cooper Lake. Anglers call it “Slab season” since most of them will be using slabs and topwater lures. Don’t let that get in the way if you’re more of a fly fishing fan – go with what works for you.

Billfishing is still going strong come August. After all, it’s when the Texas Legends Billfish Tournament typically takes place. Whether you’re looking to join the competition or just go after some Sailfish at your own leisure, it’s a great time to be on the water. In fact, the same applies for most other local offshore species. From Mahi Mahi and Tunas to Snappers and Amberjack, the going is hot.

Considering how hot it gets during the day, a bunch of anglers make the switch to nighttime fishing. Nocturnal Bass fishing is a tried and true Texan staple, but it applies to saltwater as well. Afternoon trips for the inshore “Big Three” of Redfish, Flounder, and Seatrout are also more than viable.

Speaking of Redfish, we can’t go without mentioning the fall “Bull” Red run. It’s prime time for surf fishing, and you’ll see armies of anglers lined over jetties across Texas. Present some shrimp or small crabs and you’ll catch your limit of fish in record time as long as you know what you’re doing. This will carry on until winter so there’s plenty of time to get in on the action.

On the border with Louisiana, you’ll find Sabine Lake. One of the true underdogs of Texas fishing, it’s an ideal place for your September angling trip. Don’t let the name confuse you – Sabine Lake is a proper saltwater estuary. Brimming with Redfish and Seatrout, it makes for some of the best fishing along the entire Texas coast.

This is your last chance for a productive offshore trip before winter hits. So if you’re in the market for some Tuna, Snapper, Mahi, or Kingfish, get on it while you can! We’d recommend sticking with more prominent locations like Galveston or Freeport where you can eke out the most of the late season with a professional charter captain.

Back inshore, it’s just about time for the Flounder Run. While Flounder are a year-round fish in these parts, the most productive time for targeting them is during their fall migration to the Gulf. And since you’re in Texas, it’s a good time to try out a classic Texan fishing technique – Flounder gigging. All you’ll need for it is a gigging spear, a torchlight, and a keen pair of eyes.

As the weather starts to cool, you’ll want to stick with the inshore fishing grounds. Fortunately, there’s no lack of fish to worry about here. Other than the previously-mentioned Flounder, you also have a good number of Sheepshead, Redfish, and large “Gator Trout.” The latter are a popular target for fly anglers and those looking to sight cast at their local grass beds.

When it comes to freshwater fishing in November, you can’t go wrong with Largemouth Bass and Catfish. A good place to find both is the Falcon International Reservoir – or Falcon Lake for short. Located down south on the border with Mexico, the lake is well-known as one of the finest Bass fisheries in the entire state, with a dedicated tournament scene.

Approaching the end of the year, you’ll find the majority of anglers fishing the flats. Species like Redfish, Snook, and Speckled Trout are your main targets on most trips. The clear waters make for a good opportunity to work on your sight casting skills. If this sounds appealing, be sure to check out Laguna Madre this time of year.

Another good option to end the year with is Baffin Bay. Welcome to Speck paradise! Together with other die-hards, you’ll have an opportunity to bag specimens of 30+ inches. An important thing to remember is that these Trout prefer larger meals so tailor your technique to match. Local anglers are big on using slow-sinking Corky lures, apparently they bring in Sow Trout like nobody’s business.

Texas Fishing Seasons: Fish All Over

That brings us to the end of this overview of the fishing seasons in Texas. It’s a big place and a single article can cover only so much, which is why we encourage you to keep an eye out for other angling opportunities in this part of the US. Because, as you can see, any time is a good time to be fishing in the Lone Star State. It all boils down to what you’re looking for and when you’re hoping to go out. In any case, we’re confident you’ll find it here!

What’s your favorite fishing season in Texas? Any tips or prime locations you’d like to share with other anglers? We’d love to hear from you in the comments below!

The post Texas Fishing Seasons: All You Need to Know appeared first on FishingBooker Blog.

Did you miss our previous article…
https://www.hardcoregamefishing.com/california-spearfishing-an-introduction/