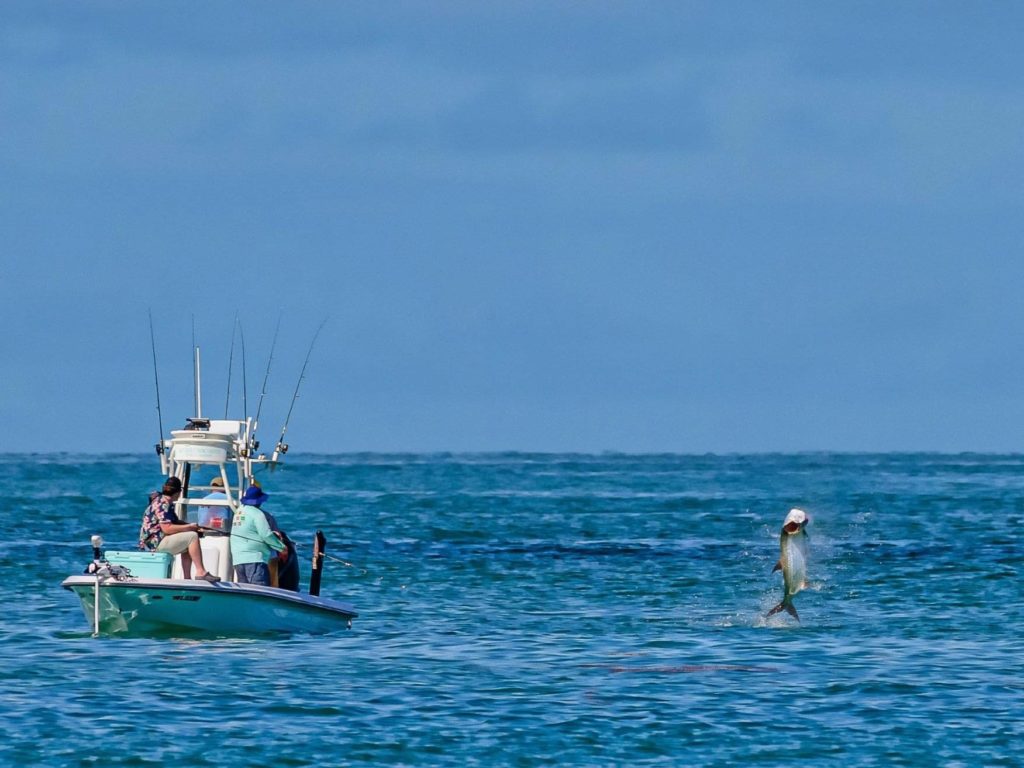 Tarpon fishing in Key West is an addiction. And that’s not just a bold statement. The Keys, with its incredible nursery of marine life and diverse ecosystem, is the place to be for any “Silver King” lover. Here, Tarpon aren’t just a prized game fish. Key West Tarpon represent the area better than any other species ever could.

The Sunshine State is one of the best places on earth to catch these acrobatic fish, and Key West is a perfect example of that. The crystal-clear waters provide a perfect habitat for Silver Kings all year long, and sight-fishing anglers use it to their advantage. However, landing Tarpon – this essential component of the Florida Inshore Slam – is never guaranteed.

In this guide, we’ll discuss what techniques local anglers use to land these beautiful fish. As well as that, we’ll cover the most popular spots in Key West and talk about the best time to pursue Key West Tarpon. Are you ready? Let’s get started.

How do I catch Tarpon in Key West?

If you choose Tarpon, there’s one rule you need to know –– it takes a lot of patience. Even local guides, knowledgeable professionals that have spent decades perfecting the craft, can’t guarantee that your effort will be rewarded.

As a respectful game fish, Tarpon fight tooth and nail. An average Silver King comes in at around 30–80 pounds, although you can come across much bigger fish. Tarpon are also known for jumping out of the water even after being hooked.

Do your best to try to control the incredible force at the end of your line and stoop forward. This is something known locally as “bowing to the King.” And then, Tarpon never seem to run out of energy, making you work to earn back all the lost line. Some Key West anglers say there’s always only one winner – you or the fish.

Read on to hear about the variety of ways you can go about Tarpon fishing in Key West. We’ll talk about the local techniques, the best bait, and all the tackle you need to land a Silver King. It goes without saying, however, that we recommend you book a trip with an experienced guide who can show you the ropes – even if you’ve targeted Tarpon before.

Chumming for Tarpon in Key West is pretty niche, although it’s a long-standing tradition. Anglers hop on their boats and stay within 1–3 miles of the harbor. There, they toss the anchor, set up their gear, and start chumming with by-catch. This includes smaller fish and bait that was previously scooped up into the net and bought in advance.

Then, you only need to wait until it’s time to bring the fish to the back of the boat. Since Tarpon are opportunistic feeders, they can get pretty intrigued and pick up the scent of the chum tossed into the water. Once the Silver Kings start showing up, your captain will show you the proper way to drop the dead bait back and hook them up. Since Tarpon think it’s chum and not hooked bait, they might take the bait. Then it’s up to you to do the reeling in.

This method works best if there are a few boats side by side tossing chum, so you’ll usually have some company.

Tarpon hang out in shallow waters pretty close to shore. Naturally, if you pack your gear and head to the flats, it’s the perfect opportunity to sight fish. It looks something like this: you spot your target, cast your bait so that the fish sees it, and allow the bait to drop down. However, it’s not as easy as it sounds.

Tarpon are easily spooked, so your presentation needs to be as quiet as possible – they won’t tolerate any extra noise. Bait movement and placement are critical. Local Tarpon anglers suggest placing your presentation in the direct path of the fish, making sure the bait descends in a natural way by peeling off the line.

Trolling for Tarpon in Key West might not be the most common technique, but some anglers practice it on a regular basis. This method includes slowly trolling with live baits, covering a lot of ground. While you won’t necessarily be very active throughout the whole process, you still need to do the reeling in part. And we know that’s quite a challenge!

Typical bait for trolling for Tarpon includes pinfish, crab, and shrimp, although artificials are also on the menu, such as spoons and topwater plugs. Some anglers use a multi-bait setup with two or more rods in the water. As for the trolling speed, local anglers stick to about 1.5–2.25 miles per hour.

Fly fishing for Tarpon isn’t just another way to catch the Silver King. In Key West, fly fishing is like a religion. Any angler in the Keys, guide or not, would agree that Tarpon are the most iconic inshore fish, and catching them on the fly is a real craft.

Fly fishing is challenging and requires perhaps even more patience than other styles of fishing. But it’s, undoubtedly, a rewarding activity. You need to make quick casts and pick the right fly outfit and flies. Tarpon will test your angling skills, stamina, and instincts all at the same time.

While fly fishing for Tarpon in Key West, you can either stake out and wait for the fish to come to you or actively pole a flat and look for the Silver King yourself. Staking out is a traditional fly fishing method that’s been practiced in Key West for generations. Whatever technique you’d like to try, it’s always recommended to head out with a local guide first.

In general, anglers tend to go spin fishing for Tarpon in Key West because they’re more comfortable with this technique rather than fly fishing. Depending on the time of the year, anglers adjust the technique to fit the circumstances.

For instance, during late February and early March, Tarpon hang out a little deeper than usual, in the channels and edges. Those early season Kings react well to live bait and artificial lures. As the season progresses, the waters get calmer, so Tarpon move to shallower waters. This, in turn, makes them slightly more sensitive to any presentation. Spin fishing works well for both shallow and deep water.

What gear do I need for Tarpon fishing in Key West?

Since your average fight with Key West Tarpon lasts anywhere from 15 minutes to well over an hour, you need to have the right gear prepared. If you go for spinning gear, consider using 20–30 lb tackle with reels packed with 300 yards of braided line and 150 yards of monofilament backing.

If fly fishing is your technique of choice, local anglers use 11–12 wt rods with floating lines for regular Tarpon, and 9–10 wt for smaller ones. Flies are normally 3–5 inches long, up to 5/0 for large and 2–2/0 hooks for juvenile Tarpon.

When fishing in rivers and canals, locals recommend using a 5–7 wt rod, a 10 lb tippet with a 20 lb, 12″ shock. One of the most important things is tailoring the color of your fly to the color of the bottom. In general, a streamer should have good contrast with the bottom of the fishery. For instance, light grey, blue, or green are great for dark grass, while orange, yellow, and red patterns work for sandy bottoms.

What’s the best bait for Tarpon?

Flies aside, both live bait and artificial lures work well while fishing for Key West Tarpon. Live, dead, or cut bait produces good results on the flats. You can go with pilchards, pinfish, and mullet. If you use shrimp as live bait, thread and freeline it or hook it under its horn on the head. Alternatively, you can use crabs instead of shrimp, as long as you remove their claws in advance and hook them bottom-up.

If you’re sticking to artificials, it’s recommended to use them on flats. Some of the most effective lures include spinning lures and plugs, Gator spoons, Rapala Magnum for trolling, and colorful plastic worms when fishing close to the bottom. Round-headed crappie jigs, Rebels, and small Rapalas are good options for canals and rivers.

Where do I go Tarpon fishing in Key West?

It’s safe to say that Key West is practically one big hot spot for Tarpon fishing. You’ll have all the chances to try your luck if you cast on the flats or head to one of the channels. Here’s a quick list of spots to consider for your Key West Tarpon adventure:

Tarpon fishing in Key West is good all year round, although the success of your trip depends on the exact season. Silver Kings migrate to Key West every February and then head offshore to spawn in the summer. Here’s a quick breakdown of the Tarpon seasons:

Spring/early summer. The fish number in the thousands during the spring months. This is when the big migrational Tarpon start showing up, starting in March. April through June is the overall best time for a Tarpon fishing trip, since large schools of fish travel through the lower Keys. During peak season, you can even hook a 150 lb monster in just three feet of water!

Late summer/fall. During in this period, anglers enjoy hunting for juvenile “baby” Tarpon on the fly or light tackle in the backcountry. These fish are smaller but are fun to catch, hopping all over the shallows. Since the waters in Key West stay warm longer, Tarpon tend to stick around well into October.

Winter. The cooler months may make it harder for anglers to find good numbers of Tarpon, but the fishing doesn’t stop. In fact, you can enjoy nighttime baby Tarpon trips during this time of year. You also have the chance to find larger Tarpon in late winter before the migration season starts.

There are so many reasons why Tarpon fishing in Key West is so popular. In addition to productive grounds, experienced guides, and beautiful weather, the southernmost city in the continental USA is also one of the most beautiful places in the country. And who would say no to a few days in this angling paradise, especially when a couple of Silver Kings are in the cards?

Every Floridian and visiting angler has to go Key West Tarpon fishing at least once. Have you ever tried it? Share your Tarpon stories in the comments below!