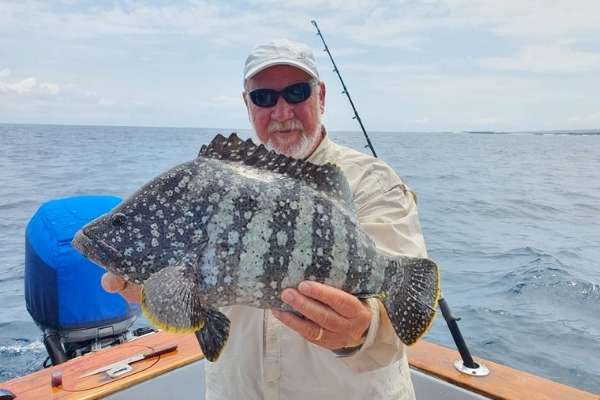 It’s not too late to book your trip of a lifetime if you want to experience the best year round striped marlin bite the world has to offer. The Galapagos Islands are a safe and exotic destination that caters to the whole family. The fishing has been quite strong for the last 6 years now so don’t miss out.

Feb 28, 2022– Thanks to a group sent to us by Fishing With Larry we had Mantarraya and Johnamar fishing for striped marlin on the Española Bank. Winston Streeter, Keith Bell, David Freeman and Roy Shaw fishing in 2 man teams. The fishing was pretty good with Mantarraya reporting 34 striped marlin raised 28 bites and 7 releases. Johnamar reported raising 17 had 8 bites and released 2 striped marlin.

March 1, 2022– Same anglers headed out to Española Bank. A lot of rain had caused according to captains for water to be off color. There were fish on the bank but action was considerably slower with Mantarraya raising 8 having 6 bites and lost 2 fish close to the boat fighting. Johnamar had similar action raising 8 but having 2 bites and releasing a striped marlin estimated around 300#.

March 2, 2022– Vertigo 2 reported good action thanks to Peter Santini raising 23 striped marlin, 17 bites and 8 releases on Española Bank. Johnamar and Mantarraya head to do inshore fishing by Punta Pitt on north side of San Cristobal Island. Both boats caught mahi, grouper, jacks and bottom fishing for a fun day.

Folks we have limited dates left in March and April to fish San Cristobal and Santa Cruz Islands for the incredible striped marlin bite. If you want shots at the best giant blue marlin in the Pacific then Isabela Island is for you. The Galapagos Islands are a most incredible fishery.