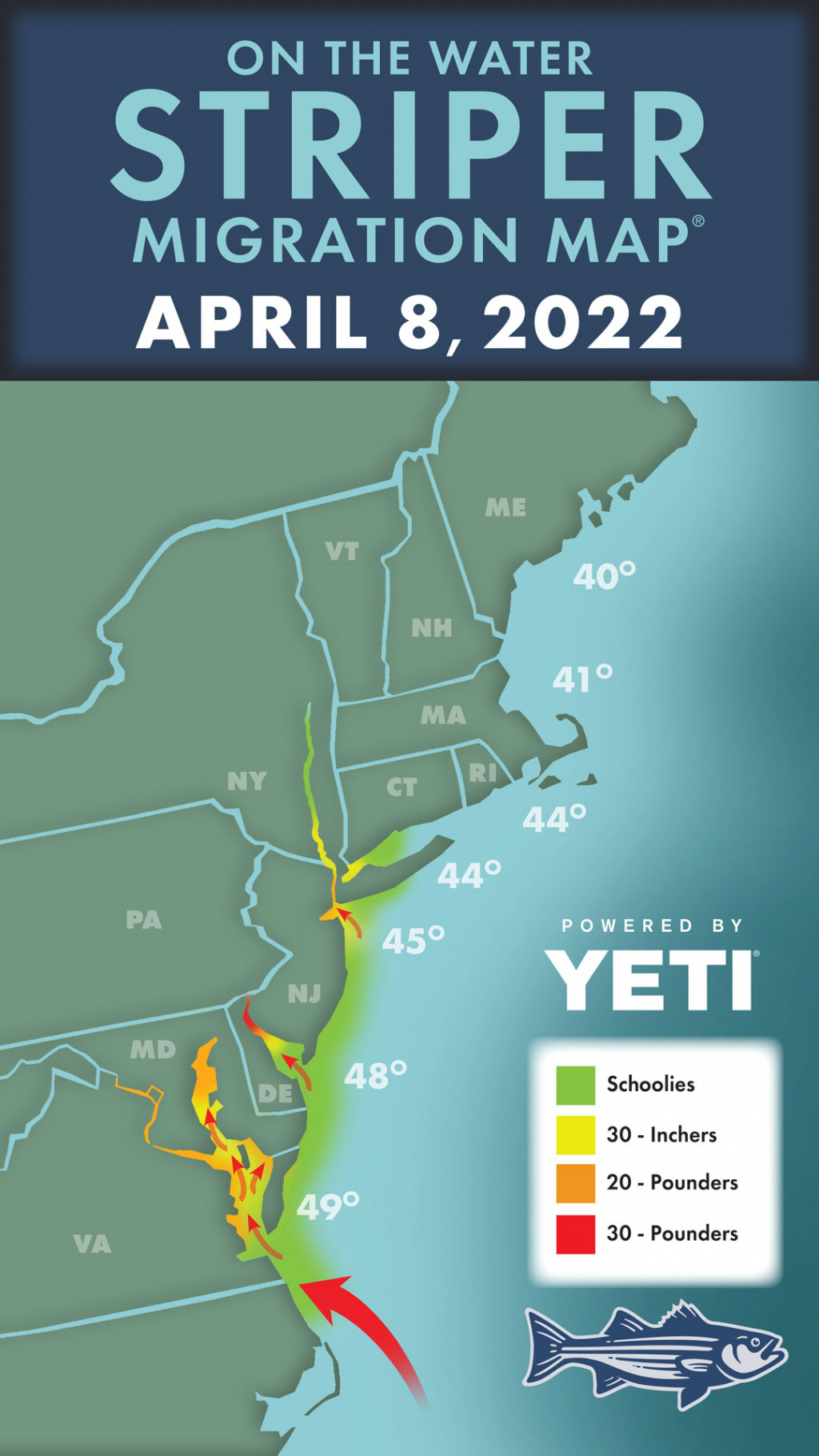 It’s been a wet, windy, and often cold start to April, but the New Moon put striped bass on the move. Large stripers are being reported in the Raritan Bay, and some extra-large fish were caught in the Delaware River this week as the stripers there move upriver and prepare to spawn.

As of Friday, April 1, all Maryland waters of the Chesapeake Bay (except the Potomac River) are closed to all striped bass catch-and-release fishing until April 30. Anglers that are out fishing are focused on blue catfish, white perch, and northern snakeheads, and a few are sampling the beginning stages of the hickory and American shad spawning runs. At Ocean City, striped bass are providing plenty of legal catch-and-release action in and around the inlet, the Route 50 Bridge, the commercial harbor, and the Route 90 Bridge. Casting soft plastic jigs and paddle tails has been a popular way to fish for them.

The up and down water temperatures have held back some of the striper spawning, but once conditions stabilize, the spawning should be in full swing in the tributaries of the Chesapeake.  Spawning had begun in the upper Choptank River, and most likely is in the Nanticoke as well.

Delaware River fishing has turned on as bigger bass enter the river to spawn. Remember that it’s catch & release only on spawning grounds April 1 to May 31 (see Delaware Fishing Guide).

Good numbers of schoolie bass coming from the back bays from Cape May north to Barnegat Bay. Seek out warmer water for the most active fish.
As expected, the Raritan Bay striper bite lit up this past week with bigger bass of 40 inches and larger being caught on the boats and Bayshore beaches. And everything seems to be working, including bloodworms, shads, plugs, flutter spoons and Mojos.

Striper action has picked up along the western North Shore of Long Island. Schoolie stripers are stirring in backwater areas, and some larger fish have been reported along the western end of Long Island. Stripers continue to be active in the lower Hudson River and with water warming should start spreading up the river. However, heavy rains and dirty water have hampered fishing.

Holdover fishing continues to improve this week in Connecticut and Rhode Island backwaters, especially once things started to warm back up.  There’s been no word of “liced-up” fish yet, but the increasing holdover activity is usually a sign that it won’t be long!

Holdover striped bass have been reported in some fresh and brackish waters on Cape Cod and in Boston, but waters are still quite cool.

The post Striper Migration Map – April 8, 2022 appeared first on On The Water.

Did you miss our previous article…
https://www.hardcoregamefishing.com/trout-season-cheat-sheet/