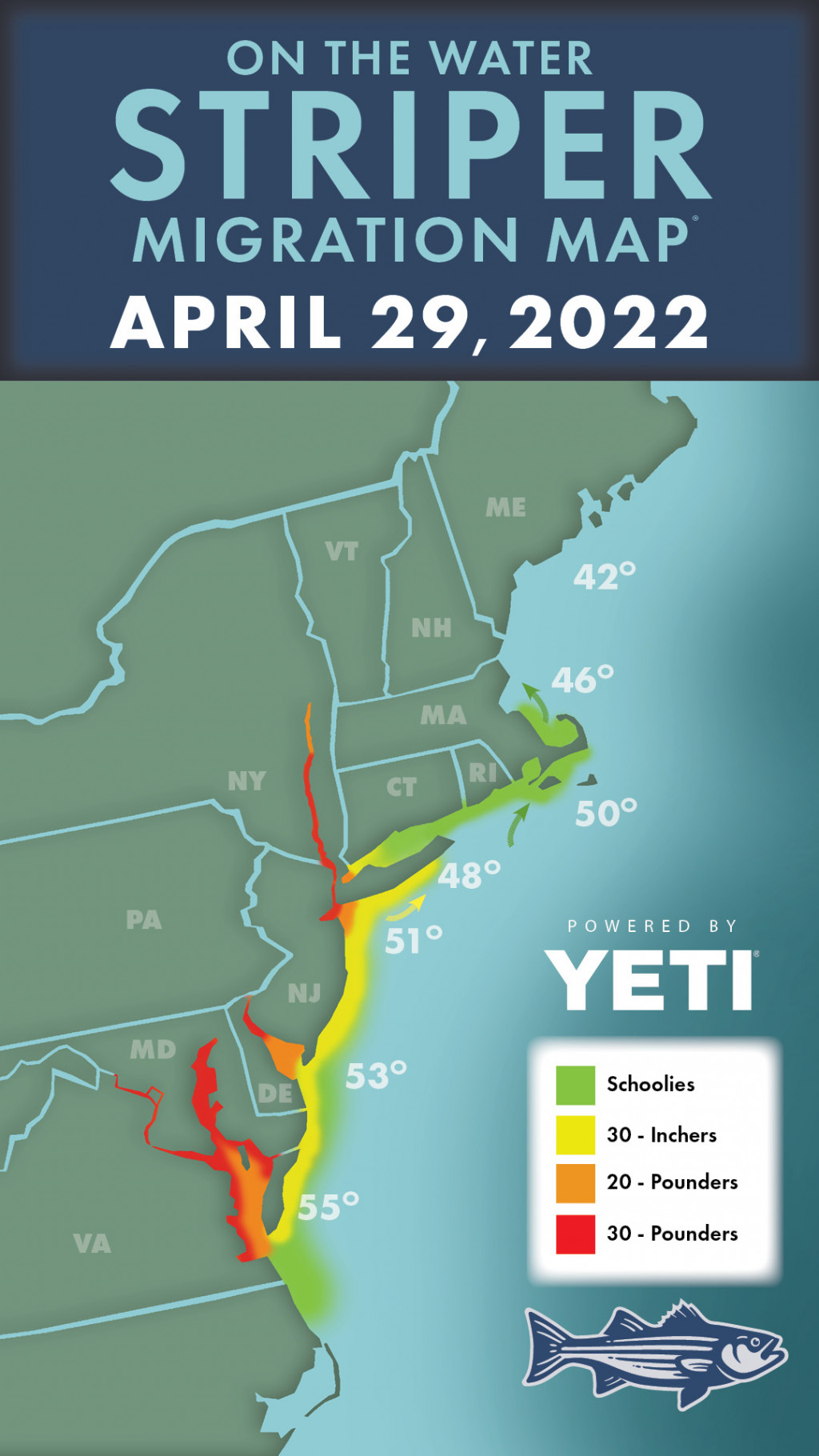 The striper spawn is on in the Chesapeake and Delaware River, big bass are heading up the Hudson, and the striper bite has been great in Raritan Bay. Migratory schoolies keep pushing north into Massachusetts waters.

The Striper Cup starts on May 1! Now is the time to sign up. Everyone who joins before May 1 is automatically entered to win a gorgeous new YETI V Series stainless steel cooler!

The 2022 Maryland striped bass trophy season begins Sunday, May 1, and Chesapeake Bay anglers will be out in force – be sure to check the DNR website for seasonal regulations in your area of the Bay. The minimum size for fish to be kept is 35 inches, with a limit of one fish per angler per day. Anyone deciding to chum or chunk for striped bass must use non-offset circle hooks, fishing with live eels is not allowed. Striped bass anglers in the middle Bay are reminded that when trophy season opens May 1, striped bass fishing is only allowed in the main stem of the Bay; the tidal rivers are still closed to fishing.

Post-spawn stripers have begun to leave some of the spawning tributaries and move out into the Bay.

Big striped bass are spawning in the Delaware River. Those fish should begin filtering out of the upper Bay and heading toward Cape May after they finish spawning

Raritan Bay continues to draw in anglers as many stripers in the 30- and 40-inch size classes are being caught by boaters and beach anglers on plugs, bait, shads and on the troll.

Schoolie stripers are flooding into the Connecticut tidal rivers and harbors, mixing with the holdover fish. Slot-size fish can be found around herring runs.

Fresh migratory stripers can be found in Rhode Island waters along the beaches and into Narragansett Bay. A few larger fish to 30 inches are being reported.

More schoolie stripers are being reported along the South Coast into Buzzards Bay and at the West End of the Cape Cod Canal. Schoolie striped bass are being caught on the ocean beaches of Martha’s Vineyard, right on time with the typical arrival of migratory striped bass on Martha’s Vineyard. Stripers are also being reported along the south side of the Cape in the bays and salt ponds. This week, we expect more fresh fish to show in Cape Cod Bay and along the South Shore of Massachusetts into Boston Harbor.

The post Striper Migration Map – April 29, 2022 appeared first on On The Water.