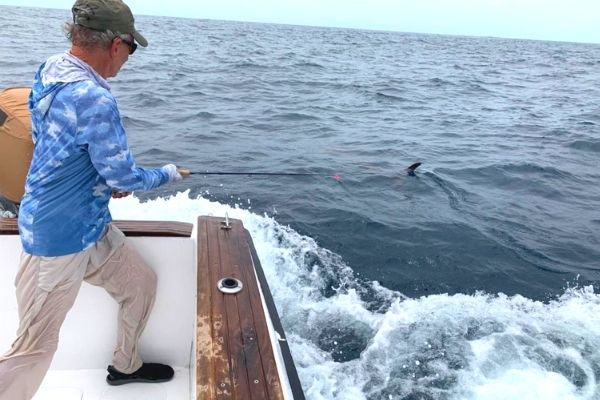 Long time fly angler and Ecuagringo client Terry Carter is currently fishing out of Santa Cruz Island on 0-30 Bank with the crew from the Patricia. Captain Yuri Gutierrez has been putting Terry on double digits of striped marlin and even some blue marlin all on fly. The Galapagos Islands continue to be the best, most consistent year round striped marlin fishery with numbers of striped marlin rarely found anywhere else.

June 25, 2021– Patricia raised 25 striped marlin to the teasers and had 7 bites on fly. Terry Carter made some great cast and broke off 4 fish and released 2 on 20# tippet and had another spit the hook.

June 26, 2021– Patricia again fished 0-30 again with Terry Carter. The early bite was on fire with fish everywhere, birds and bait. They raised 14 striped marlin before 10:00 am and had 2 bites on fly by striped marlin with both spiting fly. By 10:30 the man in the blue suite appeared and Terry made a perfect cast to hook a blue marlin about 280#. He went on to fight the fish 5 hours pretty much ending the day with the blue marlin. . After having it close to the boat 5 times the 20# tippet finally broke and Terry wound up very tired.

Folks this is incredible fly fishing for marlin by any stretch of the imagination. You are missing out if you are not booking your next fishing trip of a lifetime to the Galapagos Islands.