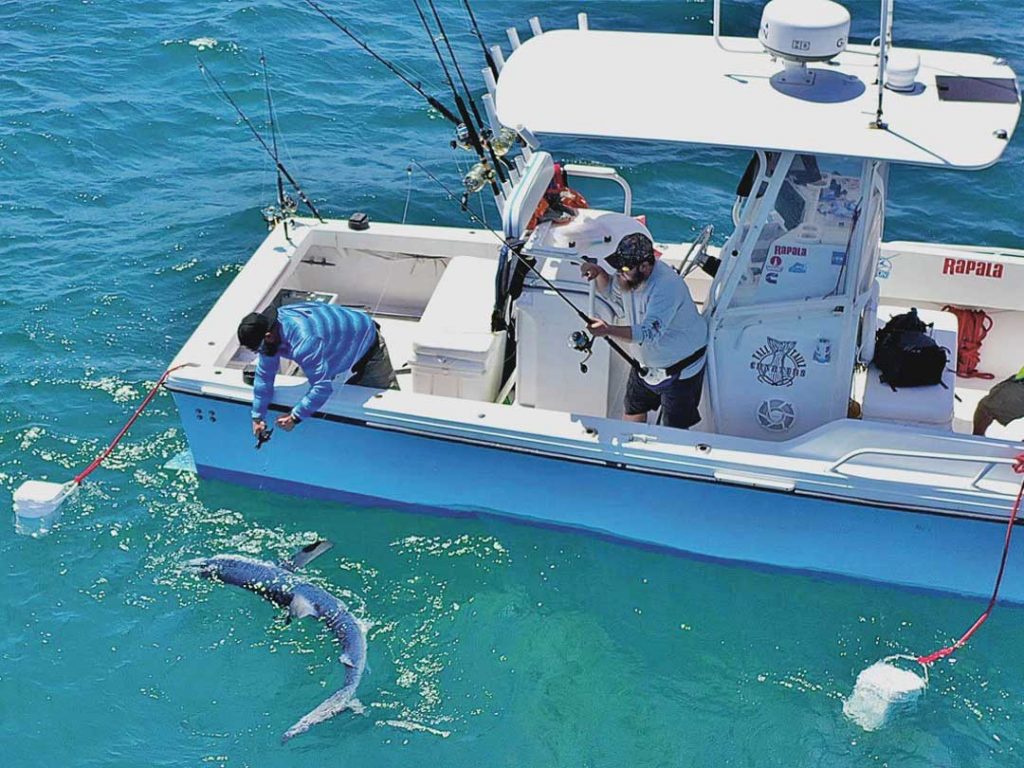 Photo above by Joey Manansala

With the growing popularity of jig-and-pop-style tuna fishing, many offshore fishermen have moved beyond the oversized, cumbersome gear that was once the standard and adopted lightweight yet powerful spinning setups. Still, when most fishermen think of shark fishing, they picture 50- or 80-wide conventional reels on super-stiff, extra-heavy rods locked into rod holders. I’ve carried over some of my jig-and-pop tuna outfits to my shark-fishing spread with tremendous success. Contrary to what Chief Brody believed in Jaws, you don’t need a bigger boat and you don’t need bigger gear to wrestle with the sharks of the Northeast.

I no longer bring any conventional rods on my shark charters—we exclusively fish spinning gear. Spinning rods are much lighter, easier to control and keep the angler more in tune with the fight compared to conventional gear. You’re also more mobile with the lighter setups and able to freely move around the boat if the shark is making unpredictable runs. Landing big fish on a lighter spinning rod is more fun, plain and simple. With the current 2-year harvesting ban on shortfin mako sharks, it’s a great opportunity to focus on successful catch-and-release fishing. I love the feeling of holding on for dear life as a monster mako dumps half my spool while flipping 20 feet out of the water!

When big-game spinning tackle began to evolve in the mid-2000s, the only companies making reels strong enough to conquer large sharks and tuna were Shimano and Daiwa. That’s no longer the case. Today, most of the major companies offer a big-game saltwater spinning reel able to handle most sharks.

In late 2021, the International Commission for the Conservation of Atlantic Tunas (ICCAT) which manages tuna as well as pelagic sharks, approved a two year moratorium on mako sharks. For 2022 and 2023, any makos caught while shark fishing must be immediately released. Mako sharks were declared overfished in 2017, and despite increasing the size limit from 54 to 83 inches (and then 71 inches for males, 83 inches for females), makos continue to be overfished.

The right preparation is key to any successful shark trip. When things are slow in the winter and early spring, I tie hundreds of shark rigs in preparation for the busy charter season. I tie a very simple rig with a few key details: size 12/0 VMC 4X tournament circle hooks for most of the rigs and size 9/0 for the smaller-mouthed thresher sharks. The hooks are connected to 3 or 4 feet of 350- to 400-pound single strand steel wire connected with haywire twist. The reason I use only 3 or 4 feet of single strand wire is because I don’t want the wire to be too long, allowing the shark to wrap itself when boatside, causing a kink and a possible break-off. I don’t want my leader to be too short, either. I prefer to remove the hook entirely or cut the hook as close to the shark as possible. This way, I can simply tie another hook via haywire twist without needing to rerig completely—each wire leader can usually last for three or four sharks before having to be replaced.

From the top haywire loop, I connect 10 to 15 feet of 300-pound-test monofilament shock leader with chafing tube or thimble (attached via crimp). From my mainline, I use a 450-pound heavy-duty snap swivel to connect directly to the thimble. Since I’m using spinning gear with fragile guide tips (without roller guides), I add a small, dense foam ring behind my snap swivel to protect the tip from damage when excited charter clients reel up too high.

Preparation doesn’t stop with tying the correct rig. Having the right chum and knowing where to start a chum slick is crucial. I make my own at home using a top-secret recipe, but for a basic but effective chum mix, grind up any oily fish you have such as bunker, mackerel, or butterfish. Mix it with fish oil, fish blood, water, small fish scales to add shimmer, and clean white sand to add cloudiness. This will serve as a potent and visual slick to draw in sharks.

Knowing where to deploy your chum slick is hugely important. A day or two before my trip, I download a recent sea-surface map and carefully study it. I look for subtle temperature breaks carrying colder water from 60 to 65 degrees, since I think makos prefer the cooler water temperature contour. Ideally, you want to find the right temperature break near good bottom structure such as wrecks, deep ledges, and offshore humps.

When setting my chum slick, I position the boat about 1/8-mile upwind or uptide of my chosen location. This gives the chum slick enough time to build until I reach my mark.

The Bait and The Spread

I try to catch fresh bluefish for bait before my trip, but bunker, mackerel, and large squid also work. I prefer live baits when possible, but if I’m using dead bait, I slice it from the tail up to the gills on either side and remove the lower spinal section. This gives a great fluttering presentation underwater.

I set three baits out, with three pitch rods rigged and ready. My first bait is about 30 feet off the boat with no sinker or balloon, suspended freely. The second bait is about 30 to 40 feet down. I attach a sinker via rubber band on my main line about 15 feet from the start of the shock leader with a balloon tied to the main line to act as a bobber and visual aid.

My last one is my deep bait, rigged for thresher sharks. This has the smaller 9/0-sized hook and is positioned as close to the underwater thermocline as possible. To find the thermocline depth, I turn the gain and sensitivity on my fishfinder to the max. Where the different temperature waters meet, a visual line will appear on your screen—that’s your target.

Each reel has the drag knob loosened just enough to keep the baits in position—about 2 to 3 pounds of pressure. When a shark starts to chew the bait, the drag starts running and the balloon will take off. I let the shark eat, then when I’m sure the bait is fully in its mouth, I slowly increase the drag pressure until the shark realizes it’s hooked. I give a few subtle jerks to fully set the hook and the fight is on!

The three pitch rods I have set aside often out-fish the spread. I have one heavy and one lighter rod rigged and ready. When sharks begin to circle the boat and “play” in the chum slick, I grab one of the rods, based on the size of the shark.

The final rod I have is also my lightest tackle option and is rigged with an artificial bait. This setup consists of 150-pound fluorocarbon shock leader attached to the mainline with an FG knot. The end of the shock leader is attached to a 2-foot piece of 300-pound-test single-strand wire with a haywire twist. Often, smaller sharks may not be interested in a chunked bait, but with the right presentation, they may crush a soft plastic or crankbait (I like using large RonZs in pink or white). Even classic striper plugs will entice a strike, but be sure to change out your hooks and split rings beforehand. This can often be the highlight of the trip, watching a small mako explode on a topwater plug.

Using spinning gear has completely changed my outlook on sharking trips. What used to be a cumbersome, outdated approach can now be a high-energy, sport-oriented display of angling. With the right preparation and right crew, you too can see the huge benefits of switching to spinning gear for sharks.

The post Spinning Gear Sharks appeared first on On The Water.