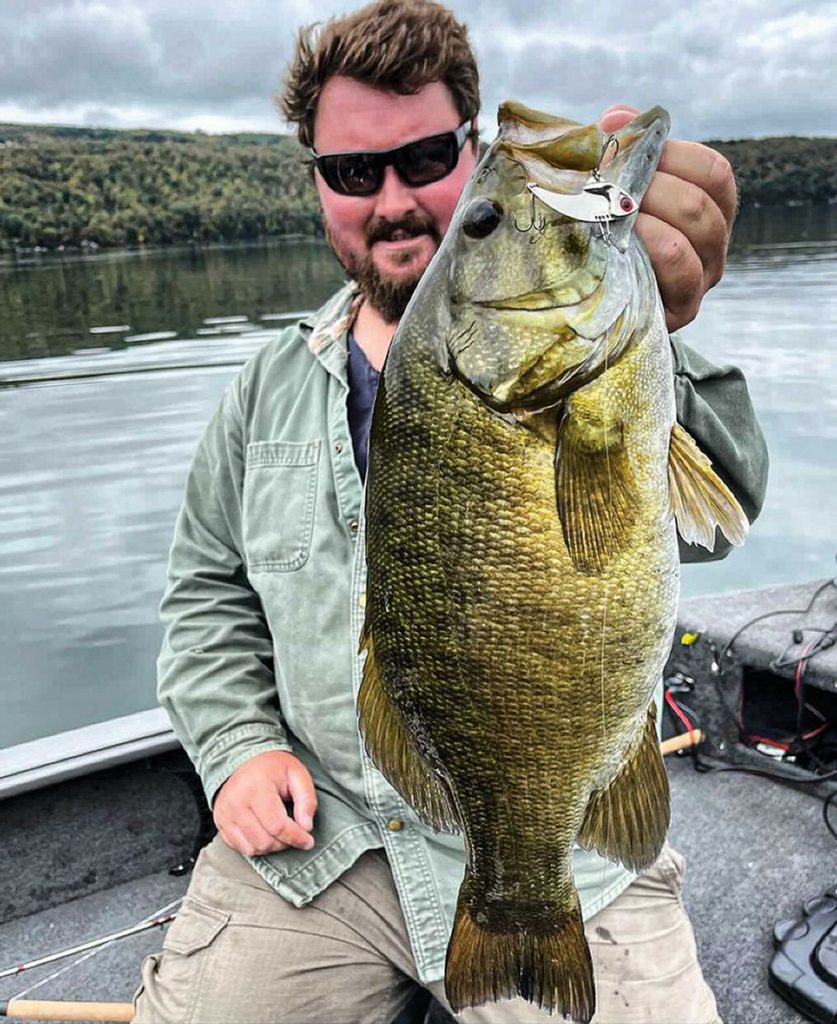 The blade bait is a versatile, productive, and underutilized lure that produces aggressive strikes from trophy freshwater fish, especially in deep, open water. I don’t go freshwater fishing without one in the tackle box.

I went to college on Cayuga Lake, the 38-mile-long “Finger Lake” carved by glaciers into the hills of western New York. I knew little about fishing in waters like Cayuga, but my friend Peter Zibinski and his roommate Kurt Hoefig spent most of their free time fishing the lake. They went early mornings, late evenings, cold and windy, or warm and still. I wondered how they managed to catch fish year-round, especially in the blustery winters. They regularly returned with pictures of colossal lake trout, and sometimes they even brought back a landlocked salmon for the table. One day, I noticed a rod leaning up in the corner of their doorway, rigged and ready to go at a moment’s notice. But it wasn’t the rod that caught my eye; it was the shimmer of an intoxicatingly shiny little lure that was tied to the line. When I asked them what it was, Kurt replied “Ah, a good ol’ Binsky.”

They went on to tell me the lure was called a blade bait. After Kurt described its action and how they fished with it, I was fascinated, but I didn’t really know how to use it. I moved back to Long Island a few months later and was left to figure the blade bait out on my own.

My first attempt was with a ½-ounce gold-colored blade that I dropped straight down a ledge on a New York City reservoir where I could make out a forest of tall weeds. The blade sank to the bottom like a brick, and I closed my bail. With the first flick of the rod, I felt the blade vibrate, followed by a thud, and I set the hook. Soon after, I saw the brownish-bronze flash and tiger-like stripes of my biggest-ever smallmouth.

Blade baits are like a metal lipless crankbait: the narrow-body wobbles tightly and generates vibration, which draws reaction strikes. While lipless crankbaits are designed with a flat spot below the line tie that creates the vibration, blade baits consist of a long, flat fin extending beyond the belly weight. When pulled through the water, the fin is was creates the vibration.

Blades are often grouped with jigging spoons and are primarily considered a cold-water presentation. Many anglers have never fished with blade baits because when winter sweeps across the Northeast, fewer anglers are willing to brave the temperatures for a handful of fish.

The appeal of blade baits comes from the versatility in how they can be fished. They sink quickly and can be vertically jigged or cast and retrieved, covering a wide range of depths.

Blades through the Decades

Although I was new to blade baits, these lures have been popular among freshwater anglers for nearly 60 years. The first blade bait was the Heddon Sonar, released in 1959. It was designed with an adjustable snap on its back to generate different amounts of vibration on the retrieve. Heddon even designed the lure to come in several realistic color patterns. For over a decade after, the blade-bait style remained unmodified and unrivaled, and the Heddon-induced “blade craze” passed.

In the early 1980s, smallmouth bass fishermen got a taste of the blade bait’s success when the Silver Buddy was released. Paul Banks and renowned smallmouth bass angler Billy Westmorland produced it. The Silver Buddy was almost identical in features to the Heddon Sonar but had a slightly different tail shape and came in several sizes, making it a more viable option for various fishing scenarios.

Banks and Westmorland offered the bait only in silver and gold. With the blade’s vibration, the silver and gold patterns generated a bright flash, a feature the Heddon Sonar lacked. After its release, the Silver Buddy’s popularity was unparalleled for several years until, again, the bait style faded from popularity.

New Jersey native Stephen Carey had fished blade baits for years, and in the mid-2000s, he set out to update this classic lure design. The result was the Fish Sense Lures Binsky. Its profile differs from that of the Silver Buddy or Heddon Sonar due to its rounded back and reduced curvature near the tail, which creates a more natural profile. The weight distribution of the Binsky allows it to remain close to the bottom while protecting the treble hooks from snagging as it’s retrieved. It incorporates a large three-dimensional eye intended to grab the attention of predatory gamefish.

How to Fish a Blade Bait

A common mistake that fishermen make with blade baits is “overworking” the bait. When my friend Kurt, who’s now a licensed guide in the Finger Lakes region, teaches his clients how to fish blade baits, they often reply, “So that’s all I have to do?”

The fin of most blade baits has multiple line attachment points that anglers choose based on their intended unique presentation. Using the rear-most line tie provides the most vibration and is ideal for vertical jigging, while the forward-most line tie creates less vibration for finesse and casting and retrieving.

For vertically-jigging blade baits, which is the most popular application, let the lure sink to the bottom, and then begin to impart action, not with big sweeps of the rod but with subtle flicks. Lift the rod just enough to feel the blade kick once or twice and allow it to sink again.
This appears to the fish as a dying baitfish or scuttling crawdad and is more likely to attract the interest of largemouth, smallmouth, walleye, lake trout, or any of the many varieties of freshwater gamefish.

The post Sharpen Up on Blade Baits appeared first on On The Water.

Did you miss our previous article…
https://www.hardcoregamefishing.com/spinning-gear-sharks/