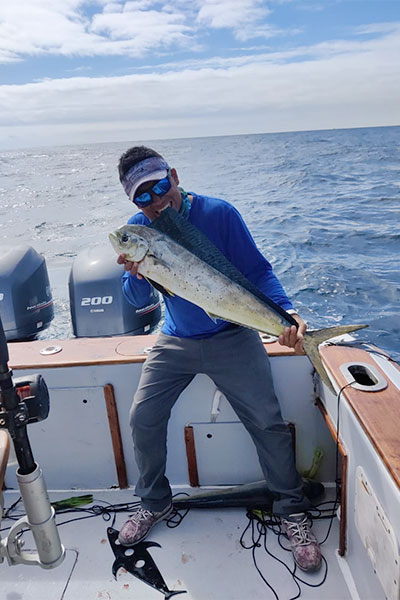 0-30 Bank has been on fire all year and pretty much for the last 5 years. Crews fishing out of Santa Cruz and San Cristobal Island love this bank because it is one of the closest between islands. The small 5 miles long by about 3 miles wide seamount tends to concentrate sardines and marlin in a smaller area. This makes it much easier to find feeding striped marlin once the sardines are near the surface.

Mantarraya set out for a day of testing equipment and treating Ecuadorian Armada personnel to fishing on 0-30 Bank on November 16, 2021 from San Cristobal Island. Dozens upon dozens of surface feeding and tailing striped marlin were reported by Captain Jonathan Valiente at the helm of the Mantarraya. Jonathan noted raising 41 striped marlin with 22 bites and 9 releases. He had guest on the boat that had never even touched a rod. The mate actually drove the boat and found the fish as Captain Valiente wanted his first mate to get some experience behind the wheel.

The best way to form a new captain for down the road is to give a mate that likes to fish helm experience. Jonathan maned the deck and was kept busy all day hooking fish and passing off rods to guest. Striped marlin presented themselves in droves of 2, 3, 4 and even 6 fish at the same time fighting over teasers and lures. The fishing was red hot from the moment they arrived on the bank until they left.

The post Season Starts To Heat Up Now But Great Marlin Fishing Has Been Going On All Year In The Galapagos appeared first on Ecuagringo.

By: Ecuagringo
Title: Season Starts To Heat Up Now But Great Marlin Fishing Has Been Going On All Year In The Galapagos
Sourced From: www.ecuagringo.com/fishing-report/season-starts-to-heat-up-now-but-great-marlin-fishing-has-been-going-on-all-year-in-the-galapagos/
Published Date: Thu, 18 Nov 2021 21:26:37 +0000