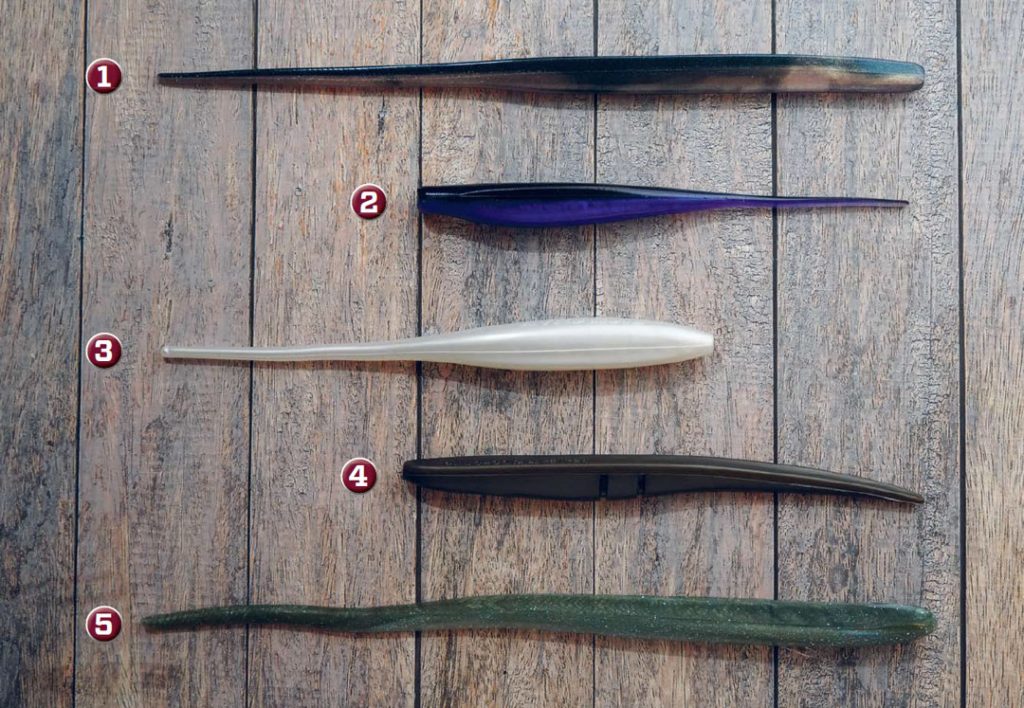 When it comes to plugs, I believe the versatile ones, the plugs that can do as many different things as possible, are the best. My reasons could fill up a book, but they actually come down to two essentials. First, if a plug is versatile, I don’t have to carry as much on each trip—I don’t need 10 lures if one will cover everything I may encounter. Having a plug that can go top to bottom, slow to fast, and passive to aggressive is an asset. The second reason versatility is so important is it means I never get surprised by some unknown factor or sudden shift in conditions. For example, if the weather reporter totally botches it and the wind ends up blowing twice as hard or half as hard as predicted, a versatile plug can handle it all, and I won’t be forced to call it quits.

On open-ocean sand beaches, conditions can change fast, and the changes can be severe. In five-minutes, it can go from calm and placid to strong winds and rolling waves. Further, anglers must be prepared to fish everything from dead-still shallows, to hard rip currents, to deep troughs, with all of these areas sometimes occurring within 100 yards. Of all the places I fish, open-ocean beaches have the most variability and require the most preparedness. You must be flexible, observant, and ready for anything. However, trying to be equipped to cover miles of beach can be exhausting if you don’t have a buggy and are hauling 30 plugs on your back.

In the world of striped bass fishing, there are a few lures that rise to the top when it comes to versatility. For sand-beach fishing, the bucktail and needlefish are the two I hear mentioned most frequently, but I’m going to make a strong argument for a third option: skinny soft plastics.

The lure category, “soft-plastic stickbaits” began with the Lunker City Slug-Go in the 1980s. I’m obsessed and have a love of the Slug-Go that borders on sickness. This is the archetype for what I mean by “skinny soft plastics,” but there are numerous offerings from a variety of lure manufacturers.

To fit the profile I’m describing here, a soft plastic must sink very slowly unrigged, have a straight tail, and be flexible enough to be rigged in the three different ways mentioned below. In addition to the Slug-Go, the Gravity Tackle GT Eel, JoeBaggs Block Island Eel, Zinger Bomba Shad, and Fish Snax Lures Super Snax all fall under this umbrella.

One of the magical things about soft-plastic stickbaits is the number of ways you can rig them. With just a single soft plastic and a handful of jigs and hooks, you can fish just about anywhere, from right on the surface and fast to 30 feet down at a snail’s pace, and everything in between. Now, of course, you don’t want to tear up your plastic by constantly switching the rigging on the go, so I suggest having a handful of your favorite models rigged three different ways.

On a Heavy Jighead

What “heavy” means to you is relative, but for most beaches, I consider it to start at around 1½ or 2 ounces. This would be light for inlet and Cape Cod Canal guys, but for the open beach, it’s rare for me to exceed 1 ounce, and the only times I use 2 ounces is during storms or high winds. This rigging is my least favorite option, overall, but when it’s necessary, it’s almost impossible to mimic with anything other than a bucktail or an internally weighted swim shad. When conditions call for it, they become essential.

On a Swimbait Hook

The second rigging option is on the opposite end of the spectrum: using a weightless or near-weightless swimbait hook. In boulder fields, back bays, and shallow flats, I find a skinny plastic on a weightless hook to be the most effective lure of all time—and I don’t say this lightly. However, on open-ocean sand beaches, a weightless soft plastic often isn’t the best choice. I’ve been frustrated trying to make one work. I continue to be compelled to try because they have produced thousands of fish to more than 40 pounds for me elsewhere. However, on the open sand, I faced two hurdles. First, they don’t cast well—even with thin, light, braided line and a soft, long rod.

The second problem is even harder to deal with because wave action and wind make it tough to stay in contact with the weightless bait. Even if the waves aren’t huge, when trying to use the most effective very slow retrieve, slack or even a bow in your line can develop, and this breaks the contact with the lure. Without a direct connection to the weightless plastic, you can’t work the lure effectively, feel striking fish, or get a good hookset.

Under flat calm conditions, weightless rigging can be outrageously effective. If I can fish weightless, I will, but I often can’t.

The third rigging option I use are the same baits on light jigheads. I consider these to be jigheads of less than an ounce—I use ½ to ¾-ounces the most.

For me, this has been a game-changing rigging option that provides the most versatility. While a skinny soft plastic on a light jighead may look just about identical to one on a heavy head, the way the bait behaves in the water is totally different. In typical sand-beach conditions (without strong, ripping currents or giant waves), a bait like a Slug-Go on a heavy jighead will always be falling straight to the bottom, being jerked up vertically by the angler, or dragging in the sand. Unless you’re retrieving very quickly, it can be nearly impossible to get a plastic on a heavy jighead to “swim,” or move through the water column with the body parallel to the bottom. Instead, the tail is always pointing straight up, or straight down, as the bait rises or falls.

With a light jighead, the pull of the line counter acts as the weight of the jighead, and the whole body then moves through the water column parallel to the bottom. The body and tail are horizontal, and this subtle swimming action is a very natural presentation that mimics almost everything. This is one key to the productivity of the light jigheads, but it’s not the only reason I believe it’s the best option on the sand.

• A screw-lock secured to the bend of a sturdy live-bait hook leaves a soft-plastic stickbait completely unencumbered by hardware, allowing the whole body to undulate and move.

• Light jigheads help get stickbaits down in the surf but also allow for a horizontal presentation, like a needlefish, on a slow, straight retrieve.

• A swimbait-style hook has a screw-lock on the eye of the hook that allows for straight, secure, weedless rigging of soft-plastic stickbaits. Swimbait hooks are available weighted, with lead molded around the hook shank, which maintains the horizontal presentation while helping get the bait down in current or rough surf.

• Popularized by Rhode Island surfcasting legend Steve McKenna, tandem-rigging a soft-plastic stickbait, in similar fashion to a rigged eel, is an artificial alternative to a natural-bait presentation. The two hooks hanging below the bait function as a keel, creating a snaking motion through the water.

While you can’t get a soft-plastic stickbait on a light jighead to do the legendary jerk and glide that weightless rigging provides, the versatility of the light jighead and natural swimming action is profound. With ⅜-, ½-, and ¾-ounce heads, I can cover the entire water column of a sand beach at a variety of normal retrieve speeds; no need to go super slow or super fast. I can also rocket the soft plastic out into moderate winds and swim it through breaking waves without having it tumble or losing connection with it. Add this to the ultra-realistic (dare I say, sexy), flat swimming action of the light head, and you have an unbeatable combination.

There may be one challenge for you to overcome with the light jig method. To be the most effective, I strongly urge you to let go of the notion of “jerking” or “jigging” the plastic bait. For whatever reason, anglers seem to always want to bounce and jerk bucktails, shads, or skinny baits on jigheads. They believe a straight retrieve isn’t “doing enough,” and won’t attract fish.

I’ve found the opposite to be true: jerking and jigging a soft bait turns off stripers feeding along sand beaches. The most natural presentation is less, not more. At night, most baitfish are trying to avoid detection, swimming along quietly, subtly moving fins or tails without any dramatic motion until they’re being chased or trying to capture some food. They aren’t going crazy, darting up and down in the water spastically. Your lure shouldn’t either.

I hope I’ve convinced you to at least give the straight retrieve a try. Other than that, fishing a skinny soft plastic on a light jighead is very simple: cast it out and retrieve it back. I like to fish any and all structure I think might hold fish while keeping the bait in the middle or bottom third of the water column. I particularly like pulling these baits over a sand bar and letting them fall slowly into the trough on the other side. I don’t stop my retrieve and let it drop off; I make a more gradual fall into the deeper water. I think this is more effective because it looks more natural to be slowly falling into the trough horizontally, instead of a head-down plunge right to the bottom. Aside from swimming baits through troughs and over sand bars, I also swing them in rip currents created by cuts, pull them through breaking waves and white water, and also run them along the beach lip—all favorites of mine.

One more tip is to try a relatively fast retrieve. I had many nights when fish seemed to respond to a quicker retrieve. The soft-bodied bait really undulates, vibrates, and pulses without fouling or rolling out (as hard baits might). Going a touch faster than “normal” can be a real gamechanger.

For me, something around 8 to 10 inches is the best compromise, and that’s what I use almost all the time, in all kinds of different structure, around all kinds of bait. Going larger can be effective, but I’ve found that fish of all sizes will attack a 9-inch Slug-Go—stripers from 15 inches to a behemoth 40 pounds. However, on a light jighead, changing the size of the bait can make a significant difference in how your lure performs, much more so than when putting it on a heavy jighead or a weightless hook. For example, sometimes I opt for a 7-inch Slug-go over a 9-inch if I feel I’m not getting enough casting distance or need to get deeper (the 7-inch has less wind resistance and sinks a bit faster). Having a combination of different size baits, on different size heads, can help dial in your presentation.

The post Sandy Beach Soft Plastics appeared first on On The Water.

Did you miss our previous article…
https://www.hardcoregamefishing.com/437-pound-blue-marlin-nets-295000-at-jimmy-johnson-tournament/