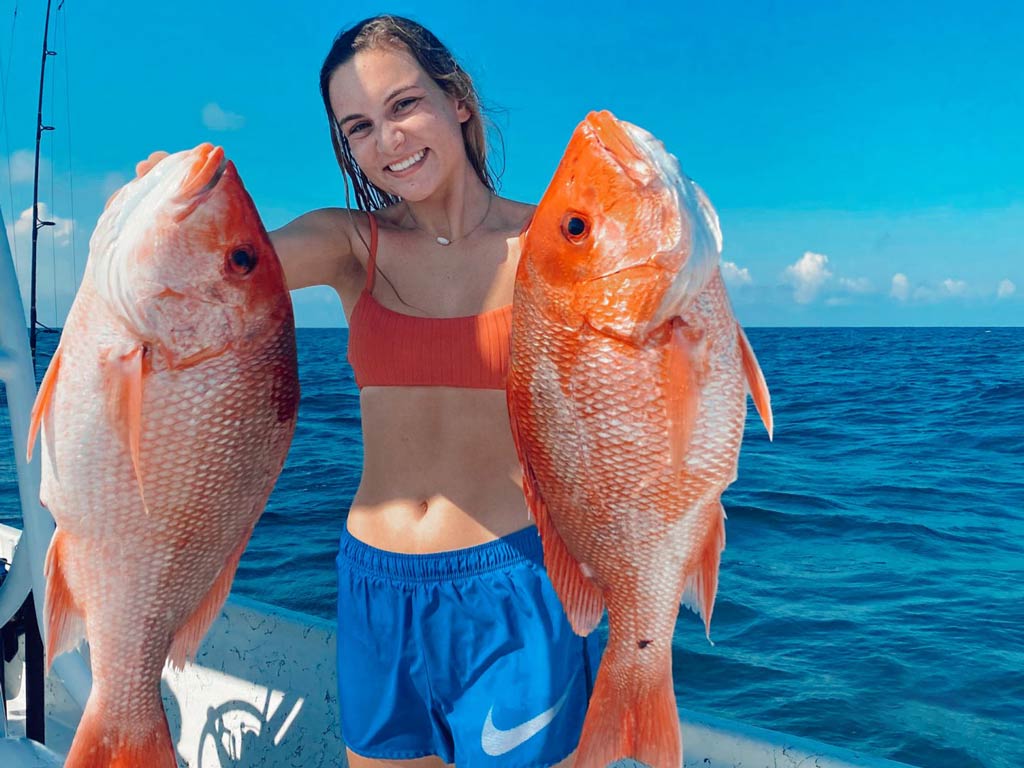 What happens when you combine the “Sunshine State” and one of the most sought-after fish species in the US? Blazing hot angling! Lame jokes aside, Red Snapper fishing in Florida is truly the event of the year. Anglers from all over the world flock down to Florida to try their luck at landing these brightly colored trophy catches.

And no, we aren’t exaggerating. With so much talk and anticipation surrounding the Red Snapper season, we wouldn’t be surprised if it were declared a national holiday! So, if you’re up for a Red Snapper pursuit, have no dilemma – Florida is the place to be.

With this article, we’ll try to paint a picture of what Red Snapper fishing in Florida looks like. We’ll examine the best places to go after these beauties and talk about how to land them. We’ll cover the latest rules and regulations and give you some tips on how to approach the upcoming season. So without further ado, let’s join the Red Snapper fishing frenzy together.

If you’re wondering what Red Snappers have that makes people go frantic, the answer is everything. Apart from the exceptional market value, Red Snappers are considered to be admirable rivals. Their fighting abilities and game fish qualities make them desirable opponents. But Red Snappers didn’t gain their popularity just by being worthy opponents…

Red Snapper is arguably one of the most delicious catches in Florida. And a tasty dinner is precisely the reward you deserve after a long day of overpowering them. As if that’s not enough, Red Snappers are ranked high on the fine-looking fish list. So, not only will you have brag-worthy stories and mouth-watering bites, but you’ll also have an insanely photogenic trophy to show off, too.

Long story short, the demand for these gorgeous beings is ever-growing, and for good reason. However, as always happens, there has to be a catch. In this case, it’s seasonality.

When is Red Snapper season in Florida?

Being on every fisherman’s radar comes with a price. Over the years, Red Snapper numbers have declined. To curb overfishing, the authorities introduced several management measures, a strict season being one of them. Red Snapper season in Florida changes annually and differs depending on whether you want to wet your line in the Gulf of Mexico or the Atlantic.

Red Snapper season in the Gulf of Mexico usually lasts around 60 days and begins in June. State waters in the Atlantic are open year-round. However, these waters aren’t abundant in Red Snappers as much as federal waters are. Unfortunately, the Red Snapper harvest in Atlantic federal waters is open only for 2 or 3 days in July.

While the season is short, the good news is that it traditionally reopens for a couple of weekends in October, and again in November for Thanksgiving and Veterans Day. But this may be subject to change as well if the quota is reached earlier.

Bear in mind that you’ll only find out the exact dates several weeks before the season starts. So, if you’ve set your mind on catching Red Snapper, keep a close eye on the official Florida Fish and Wildlife Conservation Commission’s website or our annual blog.

How to Fish for Red Snapper in Florida

Before you retell the epic story of how you’ve come out victorious from your Red Snapper hunt, it might be good to prepare for the harvest first. This means understanding their whereabouts, eating habits, and picking your angling approach. If you’re fishing with a licensed charter operator, you don’t have to worry about this as your captain will be there to guide you. If you’re curious nonetheless, read on and find out.

While you can find Red Snappers anywhere in depths from 30 to 600 feet, they essentially gather around various nearshore and offshore structures – reefs and wrecks being their favorites. And you’ll almost always locate them on the ocean floor as Red Snappers are bottom dwellers. Adult fish prefer rocky seafloors, while juveniles tend to patrol above sandy and muddy seabeds.

Now that you know where to look for Red Snappers, let’s see how you can grab their attention. The first thing you should know is that Red Snappers love crustaceans and small fish. Add the fact that they’re opportunistic feeders and you’ll know what to do.

This means that you can just lower your bait and Red Snappers will be ready to grab it. They’ll mouth just about anything from fish, shrimp, and crab, to squid and worms. You can’t go wrong with any of these as long as you give them the bait in a proper manner.

Speaking of presentation, the approach you choose to lure Red Snappers is crucial. Sure, they adore natural bait, but they’ll fall for soft jigs and spoons as well if you serve their dinner the way they like it. To make sure they notice your bait, once you lower it to the bottom, either keep it still or move it slowly.

As for the actual angling method, bottom fishing is the name of the game. Pair it up with durable tackle, sinkers, and 50-pound class lines and you’re ready to face your trophy Red Snapper. If you opt for natural baits, don’t forget to use non-stainless steel circle hooks. To maximize your chances of landing impressive specimens, team up with one of many first-class Florida Red Snapper fishing charters.

Where to go Red Snapper fishing in Florida?

Luckily for you, Florida is blessed with Red Snapper fishing hotspots. This means you can hit almost any coastal city in the Sunshine State during summer and end up with a prolific Red Snapper fishery. But if you’re wondering what the best Red Snapper fishing spots in Florida are, take a look at our list of the top places below.

Anything else I should know?

If you go Red Snapper fishing in the Gulf of Mexico, your daily bag limit will be two keepers per person. As for the length, the minimal size of your Red Snapper catch has to be 16 inches. These rules slightly differ on the Atlantic side of Florida, where a 20-inch minimum length applies. Depending on whether you’re fishing in state or federal waters in the Atlantic, you can either keep two or one Red Snapper per person.

Red Snapper Fishing in Florida: The Event of the Year

By now you’ve realized that Red Snapper fishing in Florida holds a special place in angling circles. And no, we aren’t overselling when we say that it’s the event of the year. What’s more, we’re probably selling it short. So, if you’re thinking about giving it a try, plan in advance and secure your spot aboard one of many top-tier Florida Red Snapper fishing charters in time because once the season is announced, the fishing frenzy is unlocked. Better safe than sorry! Don’t say we didn’t warn you.

Have you ever been Red Snapper fishing in Florida before? What was your experience like? Hit the comment button below and tell us all about your Red Snapper hunt! Or ask us anything Red Snapper-related!