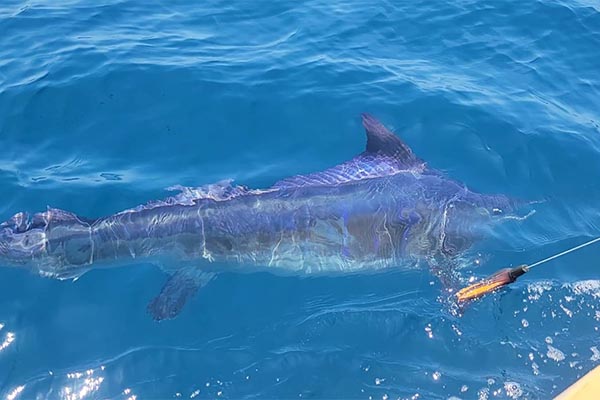 The last week of fishing out of San Cristobal Island has seem a bit of frustration across the board for anglers and crews. There are plenty of striped marlin around Rosa Blanca Bank along with bait. Fish have been very finicky and many days lacked much or any aggression. The low aggression has made fishing very challenging the last week even-though the body of fish on the banks seems to be a good number.

Feb 17, 2022– Patricia Captained by Yury Gutierrez fished with Robert Browning, Wes Parish and Jonathan Moore and went to 0-30 Bank. They raised 1 striped marlin and had 1 bite. There was not much life on the bank. Other boats that fished Rosa Blanca Bank reported 12 to 15 raises of striped marlin.

Feb 19, 2022– Patricia reach Rosa Blanca and had to return due to problems with a fuel pump that could not be solved at sea. Vertigo 2 reported raising 18 striped marlin and releasing 4 on the bank.

Feb 20, 2022– Patricia headed for fished Española Bank raised 6 and had 1 bite of striped marlin. The crew could tell there were fish there but just not aggressive.

Feb 23, 2022– Patricia headed with Michael Jane’s group to 0-30 and fished half a day before going in for snorkeling with family and raised 8 had 5 bites and released a double of striped marlin. It was a day of fun for Michael’s entire family.

Folks you will always get fishing reports straight up as best to our knowledge as reported by crews fishing. If you are looking for a trip of a lifetime to immerse yourself in a wild and off the path type of place then the Galapagos are for you. Contact the first outfitter to start fishing in the Galapagos Islands since 1998.

The post Plenty of striped marlin but many fish with no aggression appeared first on Ecuagringo.

By: Ecuagringo
Title: Plenty of striped marlin but many fish with no aggression
Sourced From: www.ecuagringo.com/fishing-report/plenty-of-striped-marlin-but-many-fish-with-no-aggression/
Published Date: Thu, 24 Feb 2022 15:03:22 +0000