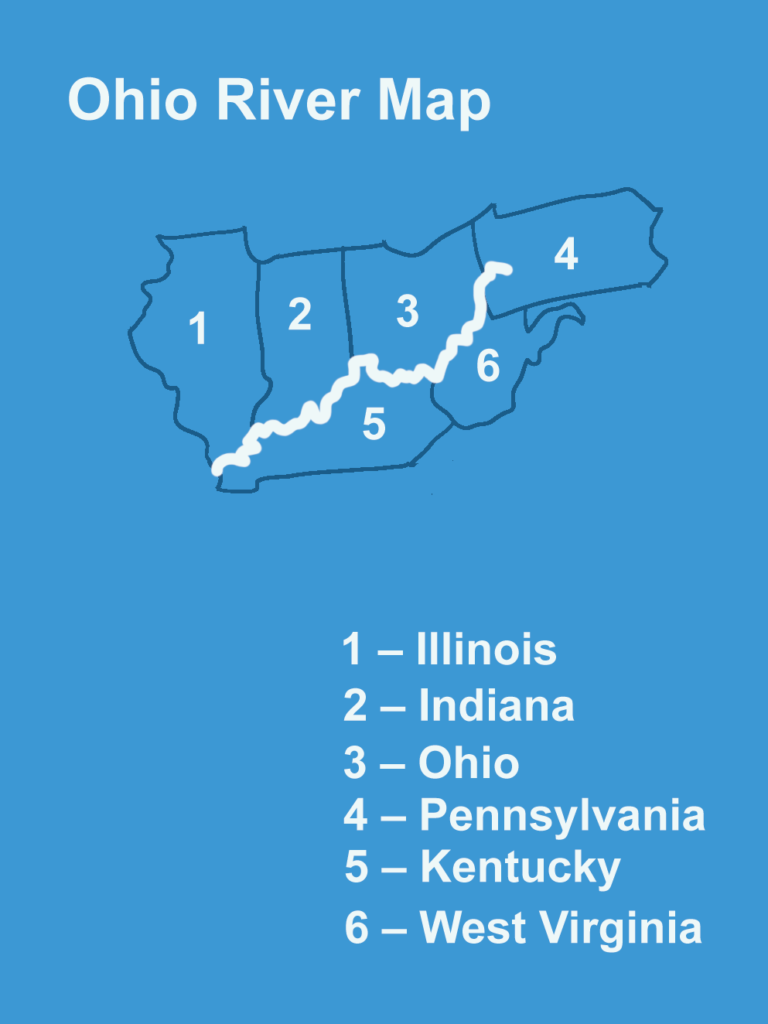 “The Ohio is the most beautiful river on earth. Its current gentle, waters clear, and bosom smooth and unbroken by rocks and rapids, a single instance only excepted.”

While the Ohio River might not be the longest or the deepest waterway, it’s full of wonders. Among the Iroquois, its name means “Good River,” and that shows. It’s not only the water source for over five million people, but is also home to various exciting freshwater fish species. Fishing the Ohio River is an experience many angling enthusiasts are eager to have.

The river flows through six states: Illinois, Indiana, Kentucky, Ohio, Pennsylvania, and West Virginia. It’s formed by the confluence of the Monongahela and Allegheny Rivers at the Golden Triangle near Pittsburgh, flowing south and west before meeting the Mississippi in Cairo, Illinois.

Ohio River fishing isn’t about large trophies that can’t wait to take your bait and jump on the boat. It has a mercurial personality, allowing each angler to fall in love with the art of fishing. When you think you’ve got the river all figured out, you’ll find out you’re wrong.

The mighty Ohio runs for 981 miles, giving you the chance to test your angling skills whenever and wherever you decide to see what’s biting. It’s a waterway without too much pressure, but with miles and miles of spots that are yet to be discovered.

So, what are the most interesting Ohio River fish out there? What are the best spots in each state? Are there any closed seasons? Let’s dive in.

What fish are in the Ohio River?

As we mentioned above, the Ohio River is home to some interesting fish species. In fact, there are good numbers of each of them – if you know where to look. While there’s plenty on offer, it’s never a bad idea to hire a local guide to show you the “honey holes!”

The success of your Bass fishing trip in the Ohio River will depend on which Bass you’re after. That’s right, there are quite a few of them!

Largemouth Bass spawn in creeks and embayments in the early spring months, just when the water temperature rises above 50 degrees. Come summer, they move to deeper backwaters. When fishing the shallows, anglers prefer to slowly run spinnerbaits, along with plastic worms and crankbaits. During the summer season, you can try fishing for Largemouth in the creek mouths with jigging spoons and pigs.

Then, there’s Smallmouth Bass. Just like their Largemouth brothers, Smallies can be found throughout the Ohio River. If they’re your target, head to rocky tailwaters and look for crayfish that Smallies usually prey on. Jigs, crankbaits, and light-colored spinnerbaits, as well as classic minnows, work well for Smallmouth.

The summer and fall months are usually the best time to fish for both Largemouth and Smallmouth Bass.

The Ohio River also offers great opportunities for White, Striped, and Hybrid Bass fishing. White Bass is the only native of the three, and you can catch them on light tackle. For the other two, you might need to pack heavier gear.

April and May are the best time to fish for this Bass group. Hit tailwater areas below dams or look for quiet areas near fast-moving water. Fish the bottoms with live or cut bait, or stick to the surface with jigs.

Bass aside, Sauger are among the most popular fish in the Ohio River. Both Sauger and their brothers Walleye hang out in tailwater areas during the spring, moving to deeper areas come summer. In the fall and winter months, they move to streams and back to tailwaters, making a full circle.

Walleye and Sauger aren’t among summer catches, though. A lot of local anglers prefer fishing for Walleye and Sauger during the cooler months, especially at later hours. As the sun goes down, the fish move into shallow waters. That’s when you can try jigging spoons through the night.

The Ohio River fish menu isn’t complete without Catfish. There are a few varieties you can find here: Channel, Flathead, and Blue. While the first two are widely available throughout the river, Blue Catfish are much rarer. Pennsylvania, Ohio, and West Virginia anglers don’t normally catch these on their trips.

The best chance to find Catfish is during the warmer months, especially May through July. Locals prefer heading out at night, armed with heavy tackle. You can find cats around tailwaters, stream condolences, and warm water discharges.

Finally, our list of the top catches in the Ohio River won’t be complete without Crappie. Some even say that the “Good River” is one of the best and most underrated Crappie fisheries of the Midwest!

Fishing opportunities for Crappie in the Ohio River are indeed overlooked. There are countless creeks, small slews, and inflows that are home to these fish. All you need to do is grab a simple rod-and-reel combo, a bobber, a hook, and some line. Some also pack jigs and small minnows for better results.

While Crappie might not be the biggest fish in the Ohio River, they’re surely fun to catch!

Where to go fishing along the Ohio River?

As the Ohio River touches six states, there are plenty of spots to fish. However, not every state shares an equal portion of the river. In this section, we’ll talk about the best places to fish throughout the Ohio Valley region.

The West Virginia portion of the Ohio River includes a few productive spots along its uppermost 300 miles. According to locals, the most bountiful spots to fish are the Cluster Islands, the mouths of the Muskingum River, Fishing Creek, Dam #21, the New Cumberland Dam, and the Byrd Dam.

Almost all Ohio River favorites can be found in WV’s waters. If you’re after Smallmouth Bass, consider fishing the upper ends of deep pools or rocky shorelines. For Largemouth Bass, West Virginia anglers can concentrate on weed beds. Deep holes with debris are the best places to look for Catfish, while areas below dams are great Walleye fishing spots.

PA’s share of the Ohio River is only about 50 miles, but it’s where the majority of the local Catfishing scene is concentrated. The river here is broad and deep enough for Channel and Flathead fishing, although they might not be that easy to find.

The best way to locate Catfish here is to look for deep holes on bends and creek mouths. Some spots to keep in mind are the mouth of Sewickley Creek by the Dashields Dam, along with the Beaver River in Rochester, Chartiers Creek, and Bridgewater Crossing County Park.

Pittsburgh is also a great place to enjoy what each Ohio River season has to offer. If you’re a dock angler, consider paying attention to the shallow waters of Point State Park.

Ohio River fishing in OH can be divided into four regions, each with its own angling opportunities. Here’s our breakdown of each of them:

The Bluegrass State shares a large portion of the Ohio River, with a slow-moving waterway and good Bass fishing opportunities.

A lot of Kentucky anglers would argue that the Falls is the best place to fish in the Ohio River. There are some pretty unique spots and a richer variety of potential targets. Apart from the usual Catfish and Bass, you can also target Bluegill, Sunfish, and even Aligator Garr.

Apart from the Falls, you can explore the East Ohio River in Allegany or the central portion in Brandenburg. The Bayous near Paducah is another good spot to explore the lower end of the river, along with Yellow Bank Island in Owensboro and downstream at mile 762 at Little Hurricane Island.

Southern Indiana offers the best Ohio River fishing opportunities in the state, especially if you’re a Crappie fisherman. There are a couple of spots to explore, but a lot of locals consider the Falls of the Ohio State Park to be a prime location. Here, you can fish right on the shoreline or from a small boat at the ramp.

Duffy’s Landing in Jeffersonville and Jaycees Boat Ramp in New Albany are good access points if you’re planning to fish from a boat.

During the cooler months, you can enjoy the annual Sauger run on the Ohio River. Local anglers often target Sauger right below the dams in February.

Illinois’s portion of the Ohio River consists of two pools and an open river area. The Smithland Pool is 27,000 acres in size and is shared by both Illinois and Kentucky. There are various embayments with many opportunities for Crappie, Catfish, and Largemouth Bass. You can check out one of the many creeks, including Barren, Big Grand Pierre, Bay, Dog, Alcorn, and Lusk.

If you want to add more variety to your list of potential targets, fish the upper portion of Smithland Pool above Old Shawneetown. Anglers sometimes catch Bighead, Silver, and Grass Carp in this area.

The Olmsted Pool is smaller, but its open river areas offer good opportunities for Catfish and Bass.

Even if you think you know the Ohio River, there’s almost always something new to discover. There are so many creeks and river mouths you haven’t discovered yet. A lot of fish species move through the river and call it home, and most of them deserve to be discovered. An Ohio River fishing trip is something you need to try at least once in your life!

Have you ever fished in the Ohio River What did you catch? What is your favorite state to fish the Ohio River? Let us know in the comments below!

Did you miss our previous article…
https://www.hardcoregamefishing.com/the-best-boating-apps-on-your-phone/