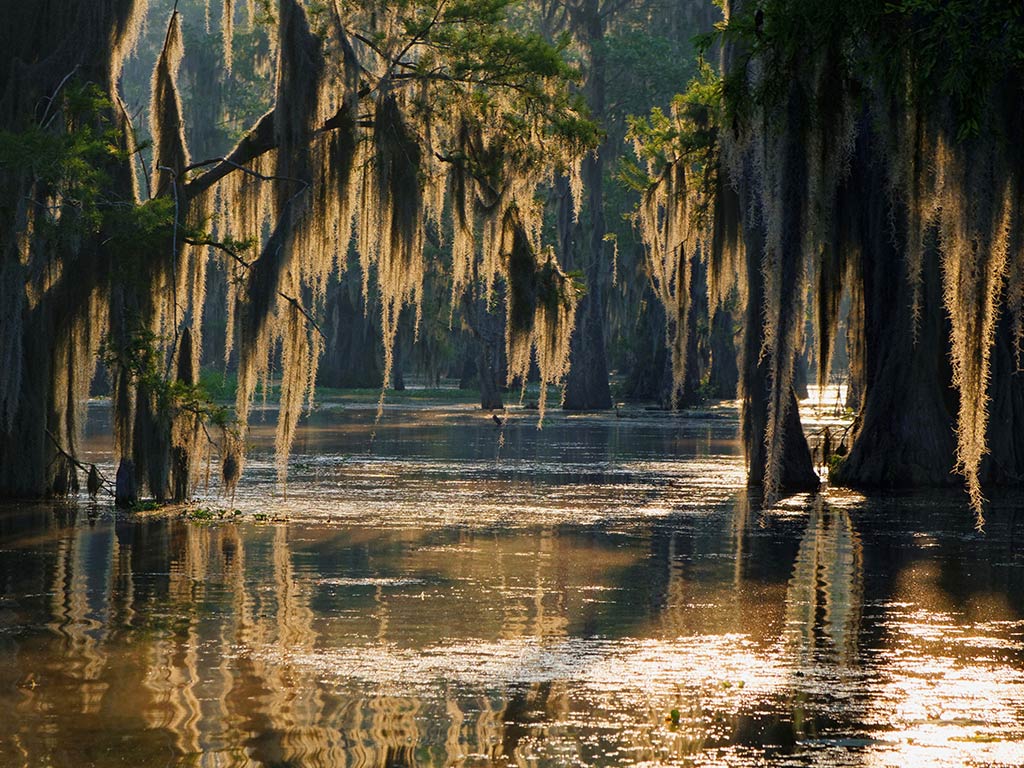 Louisiana has long been a world-famous fishing destination. From the large reservoirs in the northern part of the state to the blackwater bayous in the south, there’s a unique fishing habitat for every angler. And perhaps more than any other fish, one species stands out in all of these waters, offering anglers an exciting challenge. I’m talking about Catfish fishing in Louisiana.

In fact, Louisiana offers some of the best Catfish fishing in the entire country. And that’s due, in large part, to the mighty Mississippi River that flows along the eastern state line. That’s why, in this article, I’m going to cover everything you need to know to plan the catfishing trip of your dreams in the Pelican State.

What kind of Catfish are in Louisiana?

Louisiana is home to the big three of North American Catfish. The Blue Catfish, the Flathead Catfish, and the Channel Catfish all call these waters home. In fact, Louisiana is one of the few states where you can achieve a Catfish “Grand Slam“. That means catching all three species from the same body of water.

Additionally, Louisiana is home to smaller species of Catfish such as the Brown Bullhead. These don’t grow nearly as large as the other species, but they’re a local favorite when it comes to dinner.

Blue Catfish are the largest of the bunch, growing over 100 pounds in size. They prefer large rivers with fast currents and sandy or gravel bottoms. The state record was caught in 2014 by 12-year-old Lawson Boyte. The fish topped the scales at 114 pounds and was caught near Lake Providence on the Mississippi River.

Flathead Catfish are the next largest Catfish species in Louisiana. These big-mouthed catfish prefer live bait and actively hunt (especially at night). The state record was caught in 2007, topping the scales at 95 pounds. Fish in the 30–50 lb range are not uncommon.

Channel Catfish, meanwhile are perhaps best known for their excellent food quality. Catfish farms are dotted all over Louisiana, and Channel Catfish are the most popular species in the aquaculture industry. Average Channel varieties weigh around 4–8 pounds, but fish over 10 pounds are regularly possible. The state record was caught in 1977 and weighed 30 pounds.

Where to Go Catfish Fishing in Louisiana

The mighty Mississippi River is the main waterway in the state of Louisiana, and you’re likely to catch Catfish anywhere along the river or its countless tributaries and channels. But Louisiana is also home to a few other famous rivers, lakes, and reservoirs.

For those looking for a little more direction, I’ve broken down the best catfishing areas into three main sections. Read on…

An ancient oxbow of the Mississippi River, Lake Providence northeast Louisiana’s prime fishing destination. This heavily wooded lake boasts healthy populations of Channel, Blue, and Flathead Catfish, as well as excellent Bass fishing. During the winter months, Catfish on this lake will seek heavy cover. During the summer, focus on shallow flats along the lake edge (especially at night).

The Ouachita River flows south out of Arkansas into northeast Louisiana. This river often gets overlooked by the more famous Red and Mississippi Rivers. But it also boasts excellent Catfish populations. Flatheads are more common in the upper section, whereas you can find Blues and Channels throughout the entire watershed.

If you want to load your cooler with good-eating Channel Catfish, head to Lake D’Arbonne. Known for its numbers (and not necessarily size) of Channel Cats, there are also a handful of giant Flatheads caught here each year as well.

Toledo Bend is one of the largest reservoirs in the state at 185,000 acres. That means it has an enormous Catfish population. Due to the lake’s sheer size, Catfish can live here live long and grow large. Most anglers focus on Crappie and Cass fishing, which means the Catfish are relatively unpressured. After heavy rains, focus on the tailrace area below the dam.

A famous fishing destination in its own right, the Red River supports healthy populations of Blue, Channel, and Flathead Catfish. Focus on areas downstream of eddies and fast-moving water where deep holes and fallen structures accumulate. The lower the water levels, the better the fishing.

The middle portion of the mighty Mississippi between St. Genevieve and Morganza is littered with oxbow lakes full of Catfish. And many of these bodies of water receive very little fishing pressure! Check out the Three Rivers Wildlife Management Area, where the Mississippi, Red, and Atchafalaya Rivers all converge in a complex system of locks, canals, and swamplands.

Located just a short drive from New Orleans, Lake Maurepas is the second-largest lake in Louisiana. But don’t worry about crowds or industry on this lake. Its shores are lined with beautiful cypress trees and plenty of stumps and hiding places for Catfish.

The Atchafalaya River and its surrounding tributaries in southern Louisiana is a giant labyrinth of premier Catfish habitats. You’ll likely need a boat to fish this extensive waterway but, with dozens of bridges and access points, it’s possible to find your own secret honey hole. Focus on sandy bottom areas for big Blue Cats, and use live bait in the backwater feeder creeks for Flatheads.

Lake Cataouatche is another option just south of New Orleans. This muddy lake boasts heavy pockets of hydrilla, and the option to explore other nearby lakes with its many diversion canals. Channel Catfish and Bullhead Catfish are the primary species on this lake, but the occasional Flathead is not uncommon.

When to Go Catfish Fishing in Louisiana

You can catch Catfish year-round in Louisiana, due to its moderate climate and low elevation. However, the Catfish season really peaks from early April until late July, when water temperatures are warm and the days are long.

Be sure to keep an eye on the water levels when planning a trip. During periods of intense rain, water levels can rise quickly on Louisiana’s many lakes and rivers. High water can push fish out of the main river systems and back into the woodlands and surrounding swamps. That means you may need to change your tactics.

Conversely, if you can gain access to a dam, lock, or water control structure during periods of high rain, the fishing can be fantastic. Catfish are known to wait on the bottom of turbulent, fast-flowing water, feeding shad, shrimp, and other bait fish passing by.

Most Catfish fishermen in Louisiana use standard Catfish gear. I’m talking a 6–7′ medium-heavy power rod, with either a 5000 series spinning reel or open-faced casting reel with a 20–40 lb test mainline.

If you’re fishing the swift currents of Louisiana’s many rivers, you may need as much as 5 ounces of lead to keep your bait down. You’ll also need a barrel swivel to connect your mainline and leader to prevent the line from twisting.

Louisiana also has a strong Catfish trapping tradition. For this, anglers use hoop nets and Catfish traps to load up on these tasty critters. If you’re looking to fill the cooler, Catfish traps are an efficient way to get a lot of fish quickly.

And if you’re brave enough to leave the tackle and traps at home, try your hand at noodling – literally. Locals here use their fingers to entice a bite from a prospective Catfish and wrestle them out of their dens in 3–6 feet of water.

Louisiana anglers are infamous for their eclectic choice of baits to catch Catfish. You can’t go wrong with standard baits like large earthworms, shrimp, cut shad, shiners, and chicken gizzards.

But some anglers in Louisiana turn to odd and unique baits to stand out from the crowd: Ivory soap, grapes, kool-aid soaked chicken livers, and cut mullet are all popular alternatives to entice Catfish.

Just ask any cajun fisherman and they’ll likely have a unique Catfish bait recipe that is sure to get a laugh. No matter what bait you choose, be sure it’s something that’s durable enough to stay on the hook with some type of odor or smell.

And if you’re anchoring in a boat or fishing from shore in an area without current, try chumming! Menhaden oil, dog food, and fish scraps make excellent Catfish chum. Just beware you’re likely to attract Garfish, turtles, and the occasional alligator too!

If you’re fishing with a charter service, non-residents can pick up a 3-day $10 charter passenger license. You can learn more about Louisiana fishing licenses and permits here.

There is a 100-per-day aggregate, and anglers can possess up to 25 undersized Catfish of the three species combined.

*The exception to the statewide size limits applies to Toledo Bend, Caddo Lake, and the Sabine River where Blue and Channel Catfish have no minimum size limit, and a 50-per-day aggregate. Flatheads have an 18-inch minimum size length and a 10-per-day limit.

Catfishing in Louisiana: Many Faces, Many Approaches

When most people think of Louisiana fishing, they envision dark murky waters and swamps lined with ancient cypress and tupelo trees. And they’re not wrong!

But Louisiana also offers countless ponds, lakes, and rivers surrounded by lush farmlands, pine woodlands, and urban sprawl. Fortunately, Catfish aren’t too picky and you can find them in all of the above. So if you’re looking for a premier Catfish destination, consider Louisiana. After all, it’s possible to catch a Catfish Grand Slam in the same day!

Have you ever tried fishing for Catfish in Louisiana? Any tips and tricks, or favored locales to share with us? We’d love to hear from you in the comments below!