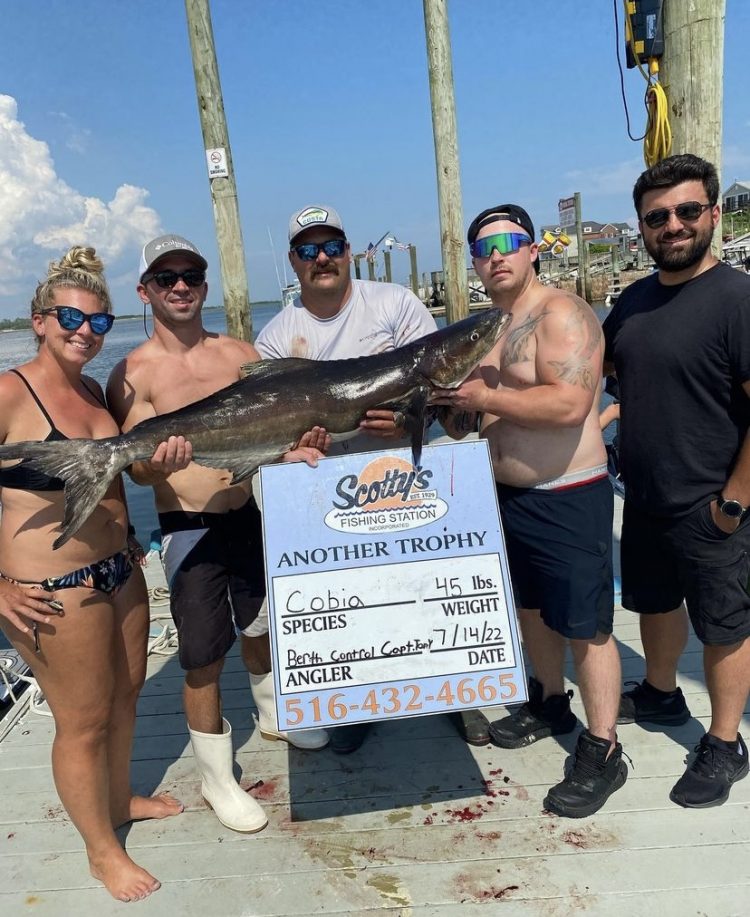 (Above) Captain Tony and the crew aboard the Berth Control showcase their catch after weigh-in.

Scotty’s Marina and Fishing Station has always been one of my favorite spots on Long Island. Conveniently situated along Reynold’s Channel in the quaint beach town of Point Lookout, it’s a quick one-stop-shop at the water’s edge. I’ve started and ended my days there many times; they began with 6 a.m. bait grabs before fluking inside Jones Inlet, and ended at Buoy Bar to refuel with a well-deserved, apres-fishing beer. There was always a reason to swing by Scotty’s, and recently, anglers have been stopping in with their hands full. Coolers of cobia are coming in at an alarming rate, and each fish has been bigger than the last.

It seems like each summer, more, and larger cobia are finding their way north with the massive bunker pods that linger off of Long Island. These subtropical pelagic predators typically feed on crabs, squid and smaller fish, but as relatives of the remora, they are frequently found scavenging alongside sharks. Each year, several cobia are landed by anglers fishing from boats and the surf on Long Island’s south shore, and they often come as an accidental bycatch; but rarely are specimens of this size caught at this rate, and in such close proximity to each other.

They are apparently in thick, because it took only a day for that 45-pound cobia to be topped. On Friday, July 15th the “Anchor n’ Spanker” crew hoisted a hefty 54-pound cobia at Scotty’s Marina, which officially began the unofficial race for a giant cobia.

Then, on Saturday the 16th, Pat Crowley and his mate Andrew Distler of the F/V Cherry Grove went out for redemption. To my surprise, Pat told me he and Andrew had already been intentionally searching for cobia. The duo had hooked and lost two cobia already two weeks prior, so Crowley knew where to find them. Although they hoped for a 30-pound fish, Pat and Andrew brought in a 62-pounder on a live bunker, which topped the fish Scotty’s Marina weighed on Friday and created a rush for near-shore bunker pods among those who have the means to reach them.

Finally, to close out the weekend festivities, Captain Charlie McNulty and his crew tipped scales and dropped jaws at Scotty’s Marina with an 87-pound cobia on Sunday the 17th.

As of now, almost all reports of cobia are coming from Long Island’s west end, but there’s plenty of life around bunker schools to the east as well. Last week, On The Water’s L.I. Field Editor, Tim Regan (@southforksalt) captured footage of what he believes to be a large cobia following a school of cownose rays near the Hamptons.

At this rate, it would not be surprising for someone to pull a near 6-foot, 100-pound cobia from Long Island’s resident bunker fields. Who’s it going to be?

The post Long Island’s Unofficial Race for a 100-Pound Cobia appeared first on On The Water.

Did you miss our previous article…
https://www.hardcoregamefishing.com/humminbird-mega-live-imaging-targetlock-gives-anglers-seamless-mega-live-and-spot-lock-integration/