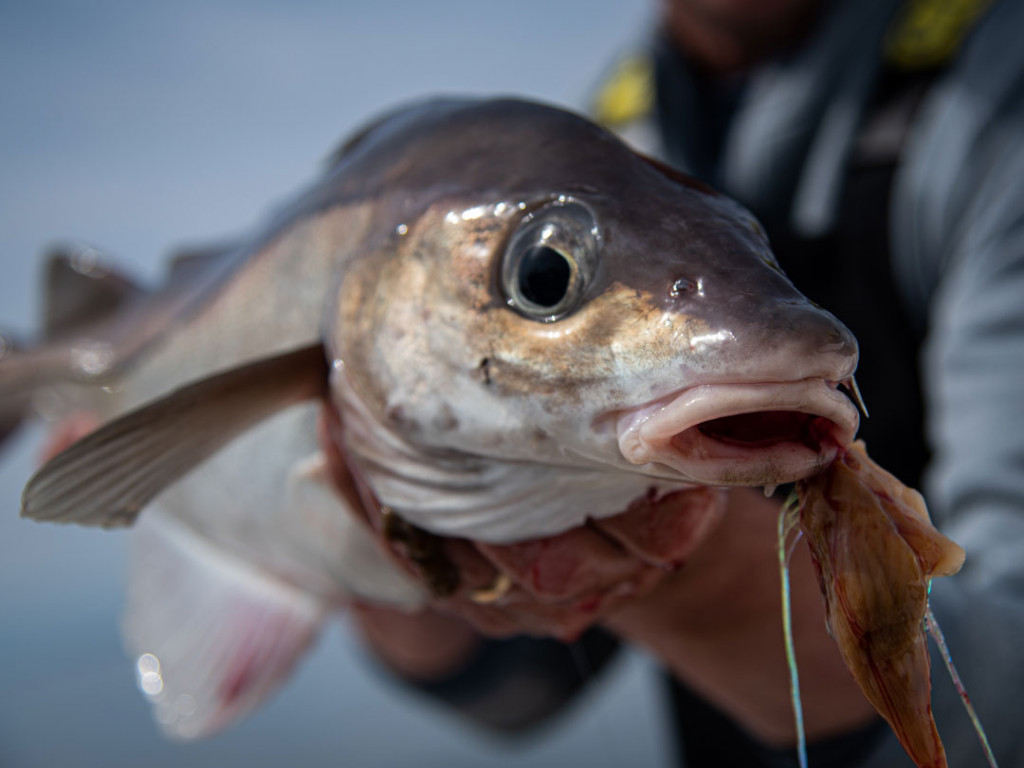 The last two months of the saltwater season have a drastically different feel, depending on whether you are fishing north or south of Cape Cod. However, one thing remains the same—there’s plenty of great fishing left for the anglers willing to brave the elements, and it’s the perfect time to stock up on fillets for the winter.

North of the Cape, those fillets are likely to come from haddock or pollock, two relatives of the currently out-of-season codfish. Haddock, with their small, pouty mouths, feed primarily on the bottom, scrounging worms, shrimp, crabs, and the occasional sand eel, while pollock suspend off the bottom, chasing herring, sand eels, and other baitfish. While both species can be caught with the same tactics, in general, fishermen seeking haddock will do better with a clam-baited high-low rig over soft bottom. A weighted chum pot should improve the odds of filling that 20-fish-per-man limit.

Pollock, being predatory and spread throughout the water column, are best targeted with a jig and teaser setup. Jigs need not stray from the classic Norwegian style that ground fishermen have used for generations, though anglers who want to add a bit of fun to this late-season “grocery run” might employ slow-pitch jigging tackle and tactics. Lighter tackle makes great sport of these fish, which carry the nickname “Boston Bluefish” for their strength and aggressiveness.

Whichever jig you choose, don’t forget a teaser or two—a small blue, purple, or pink “cod fly” is all you need. These simple teasers consist of a few strands of synthetic fibers lashed to an O’Shaughnessy hook and provide a perfect imitation of the juvenile sea herring upon which pollock love to feast.

Given the pollock’s tendency to suspend, many fishermen chase them with a jigging technique called “squidding.” This involves dropping a jig to the bottom, reeling it at a moderate pace 50 feet off the bottom, and then dropping it again. Most hits come on the drop.

South of Cape Cod, the king of the late-fall bottom fish is the tautog. Tog fishing fires up in October, getting better throughout the month, before peaking in the last week, and sometimes continuing into the first or second week of November.

As the water temperatures drop, tog seek deeper structure and feed more selectively. While easily attainable green crabs are all you need to lock up a limit of blackfish, if you’re after a trophy “white chin,” it’s worth going the extra lengths to secure white-legger crabs. These larger crabs usually tempt the largest tog on the wreck, the fish that have snubbed any green crabs dropped on their noses all season long.

Start your tog search on structure in 20 feet of water at the beginning of November and keep moving deeper until you find concentrations of fish. By December, you may be fishing in 60-plus feet of water.

While cod north of the Cape are off-limits until April 2023, south of the Cape, fishermen can keep five fish in the 22- to 28-inch slot limit. Most of this action is concentrated around Block Island or at Coxes Ledge. Jigs will take fish on occasion, but clams on high-low rigs are a more reliable option. Often mixed with the cod are some big bergall, the tog’s bait-stealing cousin. At smaller sizes, bergall are a nuisance, but big ones provide tasty fillets.

Years ago, I was surprised to learn that the bluefin tuna season outlasted the striper season in New England. Then again, at 500-plus pounds, with top speeds of 40 miles per hour (and a thermoregulatory system that allows them to conquer cold waters), bluefin can just about do whatever they please.

Light-tackle run-and-gun fishing reliably extends into November, and fishermen swimming live baits for giant bluefin can expect shots well into December—even New Year’s. Those seeking their final chance at tuna will find them around Stellwagen Bank, east of Chatham, or south of Block Island.

Largemouth bass feast day and night in November and into December. Fishermen casting big swimbaits have great opportunities for the fish of the season since fall bucketmouths are eager to eat large meals to pack on some fat before the winter.

Smallies start November in the shallows and end the year over deep humps in 40 to 50 feet of water. Vertically jigging for the smallies, whether with bladebaits, dropshots, or Ned rigs, feels enough like jigging fluke, sea bass, or stripers to scratch the saltwater itch. This action will continue until ice-up, if it happens. A good set of electronics to mark the bottom-hugging smallies, and even see them react to your lures, could bring some of the biggest numbers of the bass season. But, if all you have is a detailed chart of the pond, you can still catch some fish by “fishing blind” and focusing on structure.

Trout fishing, which is supplemented by fall stocking in many states, improves this month. Big browns hunt down big meals, while rainbows feed on emerging insects and nymphs. It’s an exciting time to fish after dark with stickbaits, mouse flies, or hair jigs for a chance at a big nocturnal brown trout. Like striper fishing, the darker the night, the better.

November can be an excellent month for bidding farewell to striped bass by catching a mess of schoolies. Most of the larger fish have departed New England by now, but schoolies will be moving en masse. Look for them under birds along open beaches as they feast on silversides, sand eels, and the last of the peanut bunker.

The big fish aren’t all gone, and many anglers chase legendary catches like Tony Stetzko’s November 73-pounder from Cape Cod. Seeking a late-fall cow can be a lonely endeavor because both fishermen and fish have thinned out tremendously. The odds are stacked against you, but the payoff, the chance at striper fishing immortality, is worth a few cold, fishless nights.

I took a swing at a big late-season striper last year and came up empty, but I found a school of 28- to 34-inch fish feeding greedily on small baitfish for three nights straight. It was fun, every-other-cast action, and an excellent way to end the striper season on a high note. While catching and releasing fish on the last night of the blitz, I thought how easy it would have been for these fish to slip by, entirely unnoticed. That made me wonder how many other schools of stripers, maybe even larger ones, were blitzing along empty beaches without an angler in sight.

The post Late Season Fishing In New England appeared first on On The Water.

Did you miss our previous article…
https://www.hardcoregamefishing.com/new-boat-ramp-open-on-the-roanoke-river-with-pictures-2/