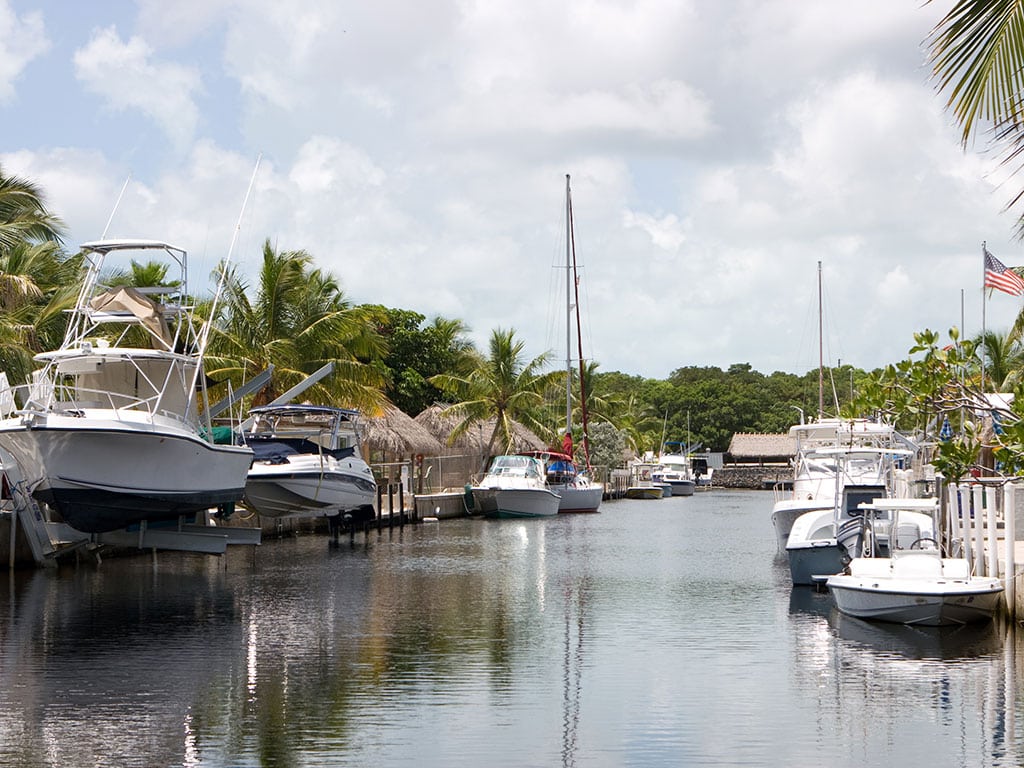 So you’re thinking of casting a line in the Florida Keys. Who could blame you? The world-famous waters around this stunning archipelago are on the bucket list of any saltwater angler. But where to go? We’re here today to help you make up your mind by talking about the Key Largo deep sea fishing scene.

We’ll run through what you can catch, how to do it, when to come, and much more in the form of regulations and useful tips. Stick with us and, by the time you’re done reading, you’ll be an expert in the field of Key Largo deep sea fishing. All that’ll be left to do is to head down to the Keys and get your fish on!

For a more general look at Key Largo’s angling scene, take a look at our video below:

We’ll start with the thing every angler wants to know wherever they go fishing. What is it they’ll be targeting, of course. The Florida Keys’ list of offshore species is second to almost none around the world. So let’s meet the stars of the show.

We’ll start off with two creatures that can be caught along the reefs and out in the deep blue. Cobia and Kingfish are light tackle favorites – and for good reason. Both offer plenty of exciting action, as they promise to fight hard to get off the end of your line. They’re also absolutely delicious, meaning that every angler will want to take one home at the end of their trip.

Cobia swim in schools in Florida, which is unusual for the species. This means you can engage in sight fishing as well as bottom fishing around structure or trolling the water tops. Try crabs and eels for bait, or any artificials that mimic these favored treats, and you’ll be sure to attract their attention.

Kingfish are most likely to be caught while trolling, and they prefer shrimp and any kind of dead fish, although plugs can also do the trick. For both species, November through April is the time when they come to the warm waters of the Keys to seek refuge. What better treat on a winter getaway?

Sticking with the theme of two fishy friends who show up at the same time, Mahi Mahi and Wahoo are both year-round species on Key Largo’s deep sea fishing menu. While Mahi Mahi are prized all over the world for their fighting prowess, dazzling looks, and delicious meat, Wahoo are often overlooked. But we’re here to try and change that. They’re equally as tough and just as delicious if you ask us!

Head offshore from Key Largo in spring and summer and you’re pretty much guaranteed to encounter these two beauties. Try fast trolling with any bait – these aren’t fussy eaters – and you’ll catch these creatures’ attention. For an extra chance of success, look for any floating debris which could entice them, or try chumming to get them on the hunt for food. Wait for the reels to screech and leap into battle against these worthy opponents.

If there’s one offshore fish that needs no introduction, it’s Tuna. Beloved around the world for their meat qualities, these creatures are top of the list for any angler wanting to catch their own dinner. But they’re also incredible game fish, too. Why? Well, not only do they grow to impressive sizes, they’re also cold-blooded, meaning they can dive deep with your line, making you fight for every inch of it.

In Key Largo, you can target two kinds of Tuna – Yellowfin and Blackfin. Yellowfins grow to bigger sizes, but Blackfins are just as fun to target. You’ll want to try trolling with lures or bait to catch these creatures’ attention. But beware, Blackfins have incredible vision, so you’ll need a very light leader to make sure they don’t catch on. Chumming is also recommended to attract these brutes.

When to come Tuna fishing in Key Largo? Pretty much any time. Yellowfins show up between April and December, while their black-finned cousins are available from September through June. Get ready to test your skills before heading back to shore with a deserved reward.

If you thought nothing could top Tuna, wait until you find out about the next two superstars on our list. Blue Marlin and Sailfish are the pinnacle of almost any angler’s career. They’re pretty, they’re big, and they put up a fight like almost no other creature out there. We’re talking leaps out of the water, thrashing bills to try and cut your line, and big, long runs. You could be facing a battle of several hours if you hook one of these!

And the Florida Keys are among the few places in the world where there’s a year-round population of Sailfish! They come closer to shore around the reefs in winter but are available further out whenever you visit. As for Marlin, these creatures peak in spring and the beginning of summer.

Trolling is the preferred method for catching these monsters, although some thrill-seekers specialize in kite fishing or even attempting a catch on the fly! Any kind of lure that mimics bait fish swimming along the water tops will do. But beware, they’re not easily fooled…

We’d need an encyclopedia if we were to list all the potential targets of deep sea fishing in Key Largo. But we’ll leave you with some more names that could equally have made the cut. Head further out and oversized Groupers and Snappers could be on the end of your line. For the former, you’ll want to try deep dropping, which could also see you target Tilefish and Swordfish! You should note that Swordfishing trips take place at night.

Other species that get bigger the further out you go include Barracuda, Amberjack, and Sharks. Try a whole range of the techniques mentioned above, and you’re sure to get a real mixed bag whenever you visit this little corner of paradise.

How to Go Deep Sea Fishing in Key Largo

You should already know that you need a boat to go deep sea fishing. And we suggest pairing up with a local captain. They’ll show you all the ropes when it comes to catching your desired fish, but that doesn’t mean you shouldn’t at least know what to expect.

One big benefit of going deep sea fishing in the Keys is that the productive fishing grounds are close to shore – just 5 miles, in fact. That means you can even catch a monster on a trip as short as 4 hours. But if you’re looking to maximize your returns, we suggest spending 8 or more hours on the water. That way, you can test your skills against the range of creatures these fishing grounds offer and explore waters up to 60 miles offshore.

Now that’s out of the way, we’ll run through exactly how you can cast a line in Key Largo for maximum effect.

The most common deep sea fishing technique, trolling means dragging a line (or several) in the water behind the boat. The aim is to mimic the prey of your target fish. You can use multiple lines to increase your chances, and weighted hooks to set the lures at the right depth in the water column to attract the attention of your desired catch.

Most offshore feeders in Key Largo, however, are topwater feeders, so you’ll likely be using some light leaders. Different fish require different speeds, too. Fast trolling is best for most offshore creatures, but Kingfish and Wahoo can also be caught by slow trolling. Even if you’re heading out to try bottom fishing or deep dropping, you’ll most likely at least try trolling on the way out or in.

Both bottom fishing and deep dropping are pretty self-explanatory. The former is most commonly associated with reef fishing or in shallow waters, but it’s also possible around any form of structure. Like trolling, the aim is to mimic bait fish. But instead of dragging your lure behind you, you actively drag it along the structure or sea bed. This is an effective technique for Cobia, Snappers, Groupers, and more!

Deep dropping is basically the same but requires specialist equipment. After all, you’ll be dropping your lure over 400 feet down – sometimes as far as over 1,000 feet! Now, unless you’re among the strongest people in the world, you’ll be unlikely to drag something up that far. And that’s without mentioning the sizes some of these fish reach! Electric reels and long lines do the job, helping you land delicious Groupers, Tilefish, and Swordfish.

Some experienced anglers swear that there’s nothing better than deep water fly fishing or kite fishing. While they’re both certainly acquired skills, if you think you’ve got what it takes, there’s no reason why you can’t try deep sea fly or kite fishing in Key Largo!

As we’ve mentioned above, many of the species you’ll be targeting are topwater feeders, meaning that they’re partial to taking a fly, too. However, you’ll need perfect timing to get species such as Sailfish and Tuna to bite, not to mention incredible strength. Fly rods and reels, and the lines you’ll be pulling in while kite fishing, are not quite as compliant as conventional gear.

A Word on Chumming

One good way of bringing your prey to the boat is by chumming, as we’ve already said. But what is it? Well, chumming means throwing bits of meat into the water to attract the fish. Cut up any fish you’ve already caught, or bring some freshly cut fish aboard and the smell and sight of a tasty treat will trick the species you want to get close to the boat. This is especially popular for Tuna species, as well as Mahi Mahi, and more.

Before you start booking your Key Largo deep sea fishing adventure, you should know some ground rules. Heading out with a registered Florida charter operator means you won’t need a license. However, if you’re casting a line from your own vessel, you’ll need licenses for everyone on board. Check out how to get yours with our handy guide.

Other than that, you’ll also want to be aware of restricted seasons and size and bag limits. These can change, but it’s important to know that Marlin and Sailfish are almost always catch-and-release only. Similarly, all Groupers are closed for harvesting from January through April, while certain Tilefish can only be caught in summer. Check out the FWC’s updated guide for this year here.

Whenever you come to the Florida Keys, there’s always the chance of landing a bucket list fish. Key Largo is just the place to start the adventure that helps you achieve it. The city’s bustling marina is full of big offshore sportfishing vessels ready to take you out. The only thing left to do is join a captain aboard one and get ready to make your dreams come true.

Have you ever been deep sea fishing in Key Largo? Any stories you’d like to share? Let us know in the comments below. We love hearing from you!

Did you miss our previous article…
https://www.hardcoregamefishing.com/all-you-need-to-know-about-the-boat-kill-switch/