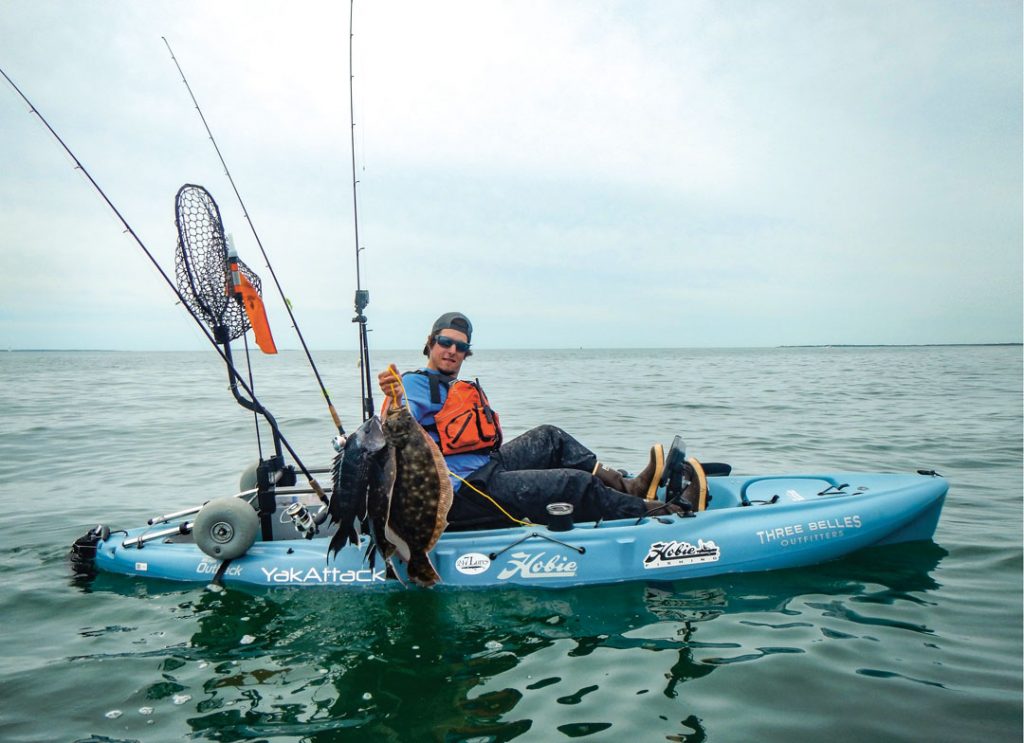 Pictured: Throughout June, keeper fluke can be caught from a kayak in the Northeast’s inshore waters.

For as long as I can remember, I haven’t had a season without summer flounder. They are one of my favorite fish to target and check off so many boxes as a worthwhile gamefish. They’re aggressive, approachable, fairly widespread, grow large, and are delicious.

When fishing from shore, I was always able to put solid numbers of fluke on the board, though I struggled with finding good-sized fish. Don’t get me wrong, though. I have been able to find keepers, even during the slowest seasons, but until recently, my personal-best fluke was shy of seven pounds—and that fish was an outlier I encountered while fishing off a dock in my teens.

A couple of years ago, I decided to get a bit more serious about fluke fishing, but I wasn’t sure where to begin. Certainly, if you want to aim for larger fish, it helps to have access to deeper water. As a predominately shore-based fisherman, I thought this meant one of two things: tag along on a friend’s boat or hop on a party boat. Neither of these options easily fit into my summertime work schedule, but then I found a third option: a kayak.

You don’t need an expensive kayak to catch fluke, but I strongly recommend using a rig with some type of pedal-drive system. Originally, I fished out of a sit-inside kayak that had no fishfinder, no pedal drive, and no rod holder. All I had was a rod, paddle, a small tackle box, the top half of a net, and a positive mindset. However, without pedal drive, I was extremely limited in where I could fish, and it was a lot more work to move and control the kayak. I did have some success, but after a couple seasons, I decided it was time to upgrade.

Pedal drive will get you around with ease, but that isn’t the only benefit. There are many variables to manage when fluke fishing on a kayak, and it is always helpful to have your hands free. With a pedal drive, I can continuously maneuver the boat with my legs, freeing up my hands to jig, net, steer, or even crack open a cold beverage.

When fluke fishing from the kayak, use a bucktail or sturdy jighead tipped with a 4- or 5-inch Berkley Gulp Grub or Swimming Mullet. I find bright colors to be the most productive, including white, glow white, chartreuse, hot pink, salmon, or any other vibrant neon shade.

It’s common to encounter porgies or juvenile sea bass while fluking, so Gulp can get shredded up quickly. Worse, while fending off the bycatch, you might not realize that your Gulp’s tail has been nipped off and is essentially useless. In these cases, one of my favorite strategies is to keep the munched-off Gulp on the hook and add a white 5-inch, eel-style jigging strip. With this presentation, the Gulp scent is still on the jig, and the tail remains as a visual attractant to the fluke. You may still get a bunch of nuisance porgy bites, but they will be unable to destroy the more rugged jigging strip.

When fishing with Gulp, the size of your selection will vary depending on the type of forage present and the weight of your jig. Keep in mind when selecting a jig that it needs to be heavy enough to hold bottom in the depth and current where you will be fishing. You can also fish with bait, such as spearing and squid strips, but Gulp stays on the hook better, stores easily, and requires less clutter and cleanup, making it ideal for kayak fishing.

Another thing to consider is whether you want to fish a single jig or a teaser setup. Each has its time and place, but I prefer to fish a single jig because if I hook an exceptionally large fish, I don’t have to worry about the integrity of the top teaser knot. Additionally, fishing a single jig can mean fewer snags if there’s any type of structure around. Without a teaser, the rig has less water resistance and will reach the bottom a bit faster.

Still, sometimes teaser rigs can be your better option. When the fishing is slow, using a teaser can solicit more reluctant fish to bite. I keep these setups as simple as possible, using 15- to 25-pound-test fluorocarbon line. I tie two separate dropper loops, placing the weighted jig on the bottom and a smaller hook tipped with a piece of Gulp on the top. Then, I directly tie the leader to my main braided line with a uni-to-uni knot. If you struggle with knots, a small barrel swivel can get the job done too.

When fluke fishing, it helps to have a rod and reel outfit that can handle a variety of environments and bycatch. I like a stiff, fast-action rod that has a bit more backbone to keep tension on the fish as I reel it up. For the past few seasons, I have been using a 7-foot St. Croix Mojo Inshore medium power, fast action rod paired with a Shimano Stradic c3000. This setup is a lot of fun when using jigs of 2 ounces or less. I especially like this pairing because it’s incredibly lightweight, so I can fish well into the afternoon without my arms feeling shot.

I fish the lightest presentation I can get away with, which may differ depending on the depth and tide that I’m fishing. In shallow water of less than 20 feet during a mellow tide, it may be possible to fish a jig as light as a quarter ounce. However, in strong current over greater depths, a jig as heavy as 1.5 to 2 ounces may be required.

Early in the fluke season, I try to keep my presentation on the smaller side, but as things warm up and larger forage moves in (particularly in late July, August, and September), I’m eager to upsize it. Regardless, when trying to get a feel for a spot, I find it’s best to start as light as possible. If it’s too light, gradually start upsizing until you can easily hold bottom.

I tend to fish a single jig setup a bit differently than the teaser rig. For the single jig, I give a series of twitches or pops to the rod tip, occasionally twitching the jig off the bottom and then letting it fall back down. Sometimes, the fish will strike as I raise the tip; other times, they might hit on the fall; occasionally, they’ll hit during the rest. Meanwhile, with a tandem teaser setup, I use a more erratic, constant twitching action, with the occasional pop for good measure. This method gives some life to the top weightless teaser hook. The continued motion allows the top presentation to look more like a wounded bait fish, which can be a tough meal to pass on for a feeding fluke.

There are a few key signals that you’re getting an eat from a doormat fluke, and you don’t want to miss them. As you’re jigging along, you may feel a sudden added weight on the other end of your line. This is sometimes accompanied by a couple of head shakes or chews. Fight the urge to immediately set the hook. Instead, reel in the slack, lower your rod, and give the fish a few seconds to fully take the hook. After a few seconds, BAM! Set the hook and try your best to reel the fish up without overly pumping the rod tip. Particularly with a bigger fish, if you horse it in too quickly, you risk dropping it. If you do lose the fish on the reel up, immediately drop the jig back down to the bottom and start jigging again. Defying all odds, I’ve seen fish make it two-thirds of the way to the boat, spit out the hook, and then jump back on the line again after the jig returns to the bottom.

Perhaps the most important component of successful kayak fluke fishing is knowing where to fish. Take some time before hitting the water to plan out places of interest. Certainly, having a fishfinder with GPS maps is going to help, but even without one, you can use other resources to narrow down some hot spots.

When looking for productive fluking grounds, key in on several notable geographic features. Fluke are structure-oriented fish, so when looking for possible spots, focus on areas with features such as drop-offs, bumps, and lips along bottom rock piles, or channels. Particularly when the tide is moving, these areas can be extremely productive.

Another key tactic for productive fluke fishing on the kayak is adhering to one of the golden rules of fishing: don’t leave fish to find fish. If you make a drift, catch one (or several) fish, hit that drift again. While there are times when the bite can appear to be red-hot everywhere, most of the time, feeding fluke are localized in specific areas. I suggest taking a series of short drifts—no more than 5 to 10 minutes, depending on the environment and structure you are fishing. If you are getting into fish, set a waypoint or just mentally note where you are. You can even set a pin on your phone and keep an eye on where it is. The second that bite dies out, pull up your line, go back to where you started and repeat the drift again. Short, targeted drifts are the best way to keep a solid bite going. The only time I recommend taking long, open-ended drifts is when the bite is extremely spotty and it’s difficult to put any kind of pattern together.

In order to make the most of each drift, go with the tide (to whatever extent possible). Under no circumstances should you try fishing against the tide. This would be easy if not for the wind.

The toughest situations are when a stronger wind pushes you against the tide. This can make fishing very messy because the wind pushes you one way while the tide is dragging your line in the opposite direction, making it very difficult to keep track of what’s happening with your lure. If you find yourself in this situation, it’s best to move into the wind so you can continue to float with the tide. In these scenarios, a pedal drive or trolling motor can keep the boat moving without having to sacrifice your arms, which should be busy jigging.

Since committing to kayak fluking, I have caught fish to almost 11 pounds. More and larger fluke are out there, ready to attack a well-placed jig, and are just a short pedal away.

The post Kayak Fluke Fishing appeared first on On The Water.

Did you miss our previous article…
https://www.hardcoregamefishing.com/swimbaits-in-the-cape-cod-canal/