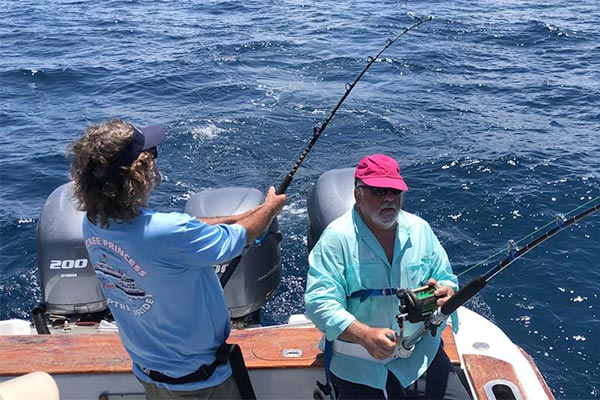 We are wrapping up the month of January, 2020 which has proven to be one of the best on record after nearly 22 years of fishing in the Galapagos Islands. The numbers of striped marlin raised averaged 44 per day.

The marlin bite has been very strong on 0-30 and Espaola Banks. Lots of sardines, sea lions, birds, sharks and the marine life have created a beautiful spectacle for anglers to enjoy.

January 25, 2020– Thomas Hobbs and his spouse fished onboard Mantarraya and released 10 striped marlin out of 23 bites and 45 raises.

January 27, 2020– On The Hook fishing with Hoffman brothers released 10 striped marlin had 22 bite and raised 43. Jason Berry fished onboard Mantarraya and released 6 striped marlin out of 14 bites and raised 40 but reported the mahi mahi to be a nuisance with over 70 mahi coming into the spread and catching 12.

January 28, 2020– On The Hook with Hoffman brothers released 14 striped marlin out of 28 bites and raised 55. Mantarraya was scheduled to fish Thomas Hobbs but had engine problems so had to undergo maintenance. Mr. Hobbs and spouse where given a complimentary discovery dive.

January 30, 2020– Mantarraya headed for wahoo, tuna and bottom fishing. A miss-coordination between crew and staff did not bring all the proper gear for bottom fishing. The group had to settle for less bottom fishing and more trolling and managed to catch several mahi, wahoo and a couple of small tunas.

January 31, 2020– Ken Higgins and his group released 10 striped marlin out of 35 bites and 50 raises onboard Mantarraya.

If you want shots at lots of marlin without having to sleep on a boat or your personal safety being a concern then the Galapagos are the safe and natural choice. No drug cartels, kidnappings, pirates or worries to your personal safety here. Just friendly people and animals waiting to show you the best of times.

If you are a seasoned or first time angler this is the place for you. We are booked up over 80% for February and March so call today if you want to try to fit in last minute dates. Come and be a part of the most amazing and versatile fishery on the planet.

Still want to fish Isabela Island 2020 giant blue marlin bite?Our main boat is completely sold out for April hosted by Braden Escobar dates. Due to demand we are opening up a second boat to fish the month of April from Isabela. The complete 5 day minimum fishing package starts at $21,900 for up to 4 anglers. Call us today to book your shot at catching a grander.