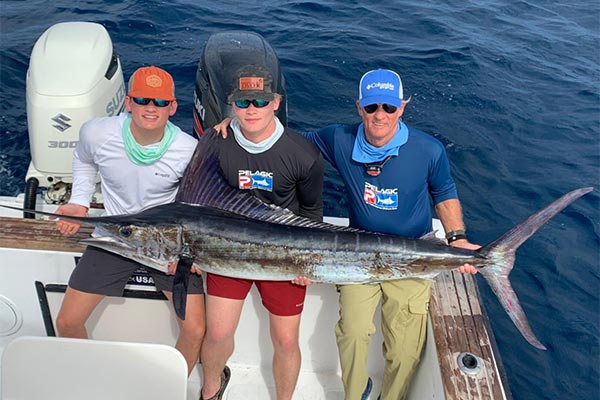 Mike Merchant and his two sons have had a dream trip fishing so far only 3 days in the Galapagos Islands. The three of them found good giant blue marlin action on Isabela Island before heading to San Cristobal to fish for striped marlin. After arriving a day late due to volcano going off in mainland Ecuador Mike, Michael and Marshall Merchant went to do the famous Sierra Negra Volcano crater tour on horseback. Later in the afternoon they went snorkeling with penguins on the Tunnels Tour. Then the mayhem of marlin fishing began. Here is the full report:

May 11, 2021– Patricia Captained by Yuri Gutierrez along with mates Jairon Gutierrez and Wilson Zambrano took the Merchant trio out of Isabela Island 8 miles to fish for giant blue marlin. They got one good bite on a fish estimated 700# plus that broke the leader as it bit through 500# leader in the corner of the jaw.

May 12, 2021– Patricia had an 8:30 am bite just about 7 miles out of Puerto Villamil, Isabela Island. The fish was estimated by the crew to be 900# plus. It made the reel scream and proceeded to jump over 130# line and break it on one of the jumps. Heartbreaking but not uncommon when targeting the largest billfish in the Pacific Ocean. Then around 12:30 pm they had a second bite and Mike Merchant released an estimated 700 pound blue marlin. 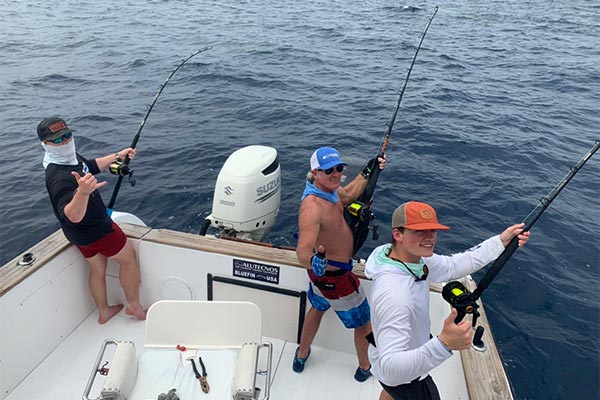 May 13 ,2021– Patricia ran about 70 miles from Isabela to fish 0-30 Bank West of San Cristobal. The crew reported releasing 9 striped marlin out of 27 lure bites. They had multiple fish in the spread and raised about 40 striped marlin. Unbelievable day of fishing.

Folks if you are tired of COVID and want to fish a destination that has been open for almost a year then you need to come to the Galapagos Islands. Virtually crime free and the 95% of the population has already been vaccinated so very little COVID here. We still have some available dates to chase giant blue marlin or striped marlin in May and June. If you want to go in 2022 don’t wait as we are booking up.