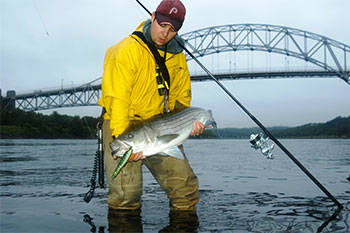 On The Water is reader-supported. When you buy through links on our site, we may earn an affiliate commission.

The first time I saw fishermen working a pencil popper, I nearly laughed out loud. I was lying back on one of the sandy spots in Turtle Cove after the morning bite under the Montauk lighthouse had died.

Most fishermen were in the process of leaving, headed home or into town for lunch, when two surfcasters arrived, each carrying honey-colored fiberglass rod and with a long, narrow-bodied plug hooked onto the first guide. Despite the fact they were using monofilament, I was taken aback by how far they cast the lures. Then, each surfcaster positioned the rod between his legs and began whipping it back and forth. It looked ridiculous. I nudged my dad, who was sitting next to me on the sand, and was getting ready to say, “Get a load of these guys,” when the water in front of one fisherman erupted and the honey-colored rod bent down to the grip. An hour later, I was in Johnny’s Tackle Shop, placing a pair of Gibbs pencil poppers on the counter.

What is a Pencil Popper?

The origin of the pencil popper is said to be the Cape Cod Canal, where Stan Gibbs sought to create a plug that mimicked the frantic tail-walking action of a whiting on the run. The resulting plug design had a narrow head that flared into a wide tail section. Because they are tail-weighted, pencils cast a long way, allowing fishermen to quickly cover a lot of water. This makes pencil poppers a prime “searching” plug, and fishermen working an unfamiliar area in the daylight would be wise to make a pencil popper the first plug out of the bag.

The action of a pencil popper is erratic, but slow, making a convincing impression of an injured fish struggling on the surface.

Fishermen fall into two camps when it comes to working pencil poppers. Some want the plug to splash around and create a commotion, while other want the lure to nose gently back and forth on the water’s surface. Both retrieves catch fish, and switching back and forth, sometimes even on the same cast, will result in more strikes.

Braided line and fast-action graphite blanks have eliminated the need to violently whip the rod back and forth—as I saw the anglers doing in Montauk years ago—but some fishermen still do. To impart a fish-catching action into a pencil popper, place the butt of the rod between your legs, grab the rod a few inches above the reel seat and begin steadily and sharply pumping the rod, all the while slowly reeling in. The harder you work the rod, the more frantic the lure will appear.

For every striper that comes out of nowhere and smashes a pencil popper, hooking itself, there will be four or five fish that roll, splash and swirl next to the lure without actually taking. When this happens, the surfcaster becomes a salesman, trying to convince the interested striper to commit. Some fishermen maintain the same retrieve speed and cadence, and this works. Sometimes, I’ll stop the lure cold. My largest-ever striper on a pencil popper came this way. A fish had blown up next to the plug twice, so I stopped my retrieve and the pencil popper—a heavily weighted sinking version—slipped below the surface and the line came tight as the bass grabbed it. Leaving a floating pencil popper still for a few seconds often triggers a bite the instant the lure begins moving again. Speeding up the retrieve can also convert following fish into biting fish.

Pencil poppers will work anywhere—inlets, boulder fields, jetties, sand beaches—but they are especially effective when large baitfish are present. Even if no baitfish are showing, it’s worth starting out with a pencil popper. If stripers are around, you can count on at least one fish taking a swipe at a pencil popper, even in the middle of the day.

Even with dozens of newer pencil poppers on the market, the classic Gibbs Pencil still accounts for plenty of large stripers throughout the year.

The unique wings on this pencil popper allow it to fly straight on the cast and chop up the water during the retrieve.

This plastic topwater can be fished like a pencil or a traditional cupped-mouth popper. It has a great walking action and a loud rattle that helps it stand out in the surf.

The thoughtful design of the Ocean Born Flying Pencil cuts wind resistance on the cast and allows the plug to “Swim” as well as walk.

The post How to Fish Pencil Poppers for Striped Bass appeared first on On The Water.

Did you miss our previous article…
https://www.hardcoregamefishing.com/angling-artist-amy-eldridge/