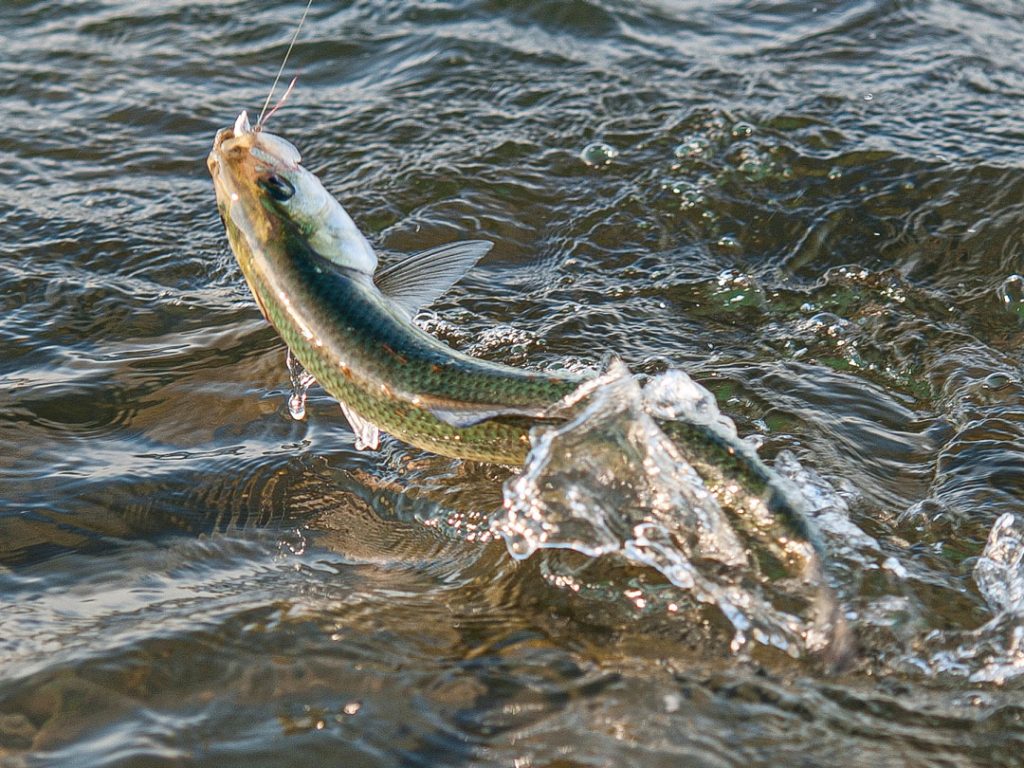 In pop culture, a hero is the subject of admiration, idealized for strength and ability. For most fall-run surfcasters, the striped bass fits the bill. However, there is a less-sought-after species that deserves recognition and should be included in fall-run forays alongside stripers, bluefish, and false albacore. To loosely quote Gary Oldman in Christopher Nolan’s The Dark Knight, these fish are the heroes Northeast anglers deserve. Come late fall, when the blues and striped bass are dwindling, hickory shad are the cape-less heroes I welcome with open arms and light tackle.

During a chilly morning in late October 2019, I spent a couple of fishless hours reading the beach for signs of bait or indicators of sandy structure when I noticed a gathering of birds to the west. Eager for a bite, I hustled down the shoreline and chucked an Ava 007 diamond jig with a red tube directly over the feed. I felt my rod tip bounce several times as my jig neared the breakers and realized that I had cast into a densely packed school of hickory shad. For nearly two hours, shad after shad fell victim to my sand-eel imitation. I hooked double the number of shad that I brought to hand; they danced through the air attempting to throw the hook, first swimming full speed toward me and then leaping from the waves with tarpon-like head shakes.

It was not the first time I had stumbled across a large school of hickories and it wouldn’t be the last.

Hickory shad range along the Atlantic Coast from Florida to the Gulf of Maine. Like striped bass, they are anadromous and spawn each spring in rivers as far north as New Jersey and as far south as northern Florida. Just like the more familiar American shad, hickory shad are oily, scaly fish. They are of minimal commercial value, but in the 1980s when the striped bass fishery crashed, recreational anglers— namely surfcasters— in New York, New Jersey, and New England rediscovered these rambunctious surf specimens.

Although they inhabit much of the same inshore waters as striped bass, hickory shad maintain an air of mystery among the fishing community. Little is known about where they travel after spawning. I have caught them in back bays of Long Island as early as the first week of May, although they tend to arrive in the Northeast in early June.

Hickory shad live about seven years and grow to a maximum length of 16 inches. The current IGFA World Record was set by Dave Chermaski in 2008 on the Econlockhatchee River in Florida, and that fish weighed 2 pounds, 14 ounces. They may not be the largest gamefish, but upon being hooked, their acrobatic fight and unruly attitude provide a welcome light-tackle challenge.

Hickory shad prey on much of the same forage as striped bass and bluefish, and their feeds can often be spotted from a distance as they frantically jump and roll on pods of bait. They roam in large schools around open beaches and back bays feeding on spearing, bay anchovies, sand eels, grass shrimp, and even peanut bunker. They are fast, surprisingly strong, and downright challenging to keep hooked with light surf tackle. For the Northeast inshore angler or flyrodder, they are the closest you’ll get to juvenile tarpon fishing without hopping on a southbound jet.

Through most of the fall season, school stripers remain mixed with hickory shad, and both can easily be handled with a light inshore setup. For hickory shad, the lighter the tackle, the higher the likelihood of landing them. They are also usually close to the shoreline, so long casts are rarely necessary. A light surf or inshore rod between 7 and 8 feet with a soft tip, rated up to at least one ounce, is ideal. The softer rod tip reduces the likelihood of the shad throwing the hook because it absorbs more of the frantic motion from the fish’s aerial stunts. Pair the rod with a 3000-size inshore spinning reel spooled with 20-pound braided line and a 20-pound fluorocarbon leader.

Given that their diet consists mainly of small, shiny baitfish, any lure that mimics sand eels, bay anchovies, peanut bunker, or silversides is a safe bet when searching for a late-season bite. Because these fish feed on small baits, surfcasters armed with heavier gear often tie on a Sabiki rig along with a 1- or 2-ounce spoon for casting weight. Another option is a small bucktail teaser fly or soft plastic tied above a larger lure. However, with a light rod rated up to one ounce, there’s an array of tins and casting jigs that can be thrown for hickory shad, including diamond jigs, Kastmasters, and resin or epoxy jigs.

Fly anglers have a number of small saltwater baitfish and shrimp patterns to choose from. A 6-weight rod is ideal, although you may need a heavier rod in bigger surf or to cast into an onshore wind.

Although never guaranteed, I’ve learned from surfcasting in the late summer through fall that the presence of hickory shad often implies the presence of striped bass nearby. As much fun as they can be to catch with the right gear, hickory shad also provide surf anglers with some of the best striper bait available.

Hickory shad are a prime chunk bait, the runner-up to a fresh chunked bunker. A bloody, oily, fresh-caught hickory shad will outfish any frozen bait. However, each state in the Northeast has different regulations for hickory shad, and they must be adhered to when using them for bait.

When targeting striped bass, a standard bait-finder rig tied with 20- to 40-pound fluorocarbon leader, a 5- or 6-ounce pyramid sinker, and a 6/0 or 7/0 circle hook will do the trick. First, cut the shad into four or five chunks; depending on the size of the fish, you should be left with 2 to 4 middle sections, along with the head and tail ends. Then, like a bunker chunk, thread the hook through both sides of the tough, scaly portion to keep it on the hook through crashing waves, and leave the point of the circle hook exposed.

Shad can also be live-lined like bunker. This is a relatively difficult presentation from the surf, but from a boat or pier, a panicked shad is one of the best baits to use for larger striped bass. When fishing a live shad, use a larger 8/0 or 8/0 circle hook, ideally on a bridle rig.

While hickory shad don’t excite me the way blues or bass do, I have gained an appreciation for the fish that so many striped bass anglers ignore in the fall. I appreciate their ability to provide shoreline entertainment as both a target species and as bait for the bigger, more desirable striped bass. However, my admiration for them is primarily rooted in their airborne acrobatics and the way they linger in the surf as the fall marches on and striped bass fishing slowly begins to die off. I welcome those cold mornings spent chasing birds down the beach to keep warm, knowing that I may be freed from a skunk by these unsung heroes of the fall run.

The post Hickory Shad: The Unsung Heroes of the Fall Run appeared first on On The Water.

Did you miss our previous article…
https://www.hardcoregamefishing.com/north-shore-stripers-at-night/