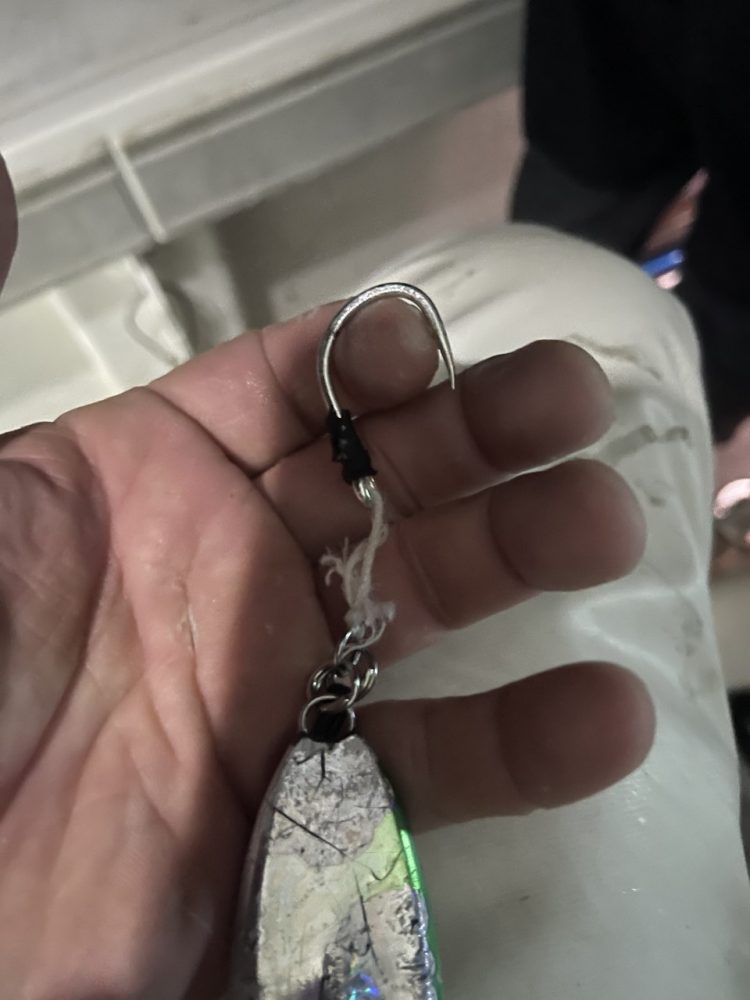 Under the cover of night Captain Ryan Hill, Matthew Bach, Michael Tanionos and Jeff Vantine got more than they bargained for while jigging for bait during a recent tuna trip off Massachusetts.

The crew prepped Hill’s 26-foot Regulator for a long day of giant tuna fishing ahead while Captain Ryan Hill charted the course. Hill operates Day Break Charters, but this outing was meant to be a fun trip with friends. The plan to was to first catch live baits before hitting the tuna grounds.

While the crew was busy jigging for bait, Jeff Vantine was jigging using a 250-gram Shimano Flatfall Butterfish jig with dual assist hooks. The setup, a Shimano Ocea Jigger 4000 on an ODM Jigster SPJ, was spooled with 80-pound-test braided line with a 60-pound-test Seaguar fluorocarbon leader. Vantine’s targets were pollock, haddock, and mackerel, but after hauling in a handful of dogfish, Vantine noticed that the twine on one of the assist hooks had chafed through, leaving only one hook on the butterfly jig. Despite the missing hook, Vantine dropped the jig back down.

Upon dropping the jig 200-feet down, Vantine immediately felt more dogfish messing with it rather than the haddock, pollock or mackerel for which they hoped. Out of frustration, he made five speed cranks to get the jig up and away from the bothersome bottom feeders, and after the fifth turn of the reel handle, the jig got smoked.

“That’s not a dogfish!”, Vantine relayed to the crew. After some friendly jabs from his pals, they noticed the rod had doubled over and there was no mistaking that an exceptionally large fish had taken Jeff’s jig. Vantine explained that the fish made an immediate right hand turn and went behind the transom, snagging the braided line on the motor in the process. He tried to pop the line from the motor but the tension was so great that he could not get enough leverage at his angle. Captain Ryan Hill sprung into action, freeing the line from the motor so that Vantine could maneuver to the other side of the boat where the fish had run.

Matt Bach checked in with Vantine, “You’ve got about 660-yards of line on there, right?”. Vantine confirmed, but noted that about 400-yards of line had already left the reel. They engaged the drag to its fullest capacity, and a grueling 3-hour fight ensued.

With the drag maxed-out and all lines cleared, they remained tight and were able to give chase. Hill remained at the helm to keep the boat quartered to the fish, which showed no signs of slowing. Matt Bach, an experienced tuna fisherman himself, provided instruction to the Captain on the changing direction of the fish. In the dark, they had to keep an eye on the braid to avoid any accidents on board, and decipher which direction the fish was moving. Meanwhile, Vantine and Tanionos took turns cranking in line when they could in order to avoid fatigue.

Captain Hill was adamant about getting eyes on this fish. After a little over 2 hours, they had the fish in sight, and it was monstrous. Still, it took the team another 45-minutes to get a harpoon shot. Bach grabbed Vantine’s headlamp as they tried desperately to pierce the darkness so Tanionos could throw the harpoon. The tuna continued swimming about 5 feet below the surface, maintaining a distance of 20- to 30-yards in front of the boat for nearly 40 minutes. “It was just teasing us”, Bach explained. “We couldn’t get any closer to the fish, but we could see how big it was.”

The dark blue-black color of the tuna’s back made this task even more difficult in the minimal light they had. Finally, with the fish heading directly for another lobster pot, Hill made a push to port to get close enough to the fish for Tanionos to take, quite literally, a shot in the dark.

Tanionos launched the harpoon nearly 20 feet into the darkness and connected. “That’s when it came to life”, said Bach. The fish took off, taking the ball and all the line with it, racing underneath the boat to the other side. Vantine muscled the fish back in and got it close enough for Bach to swing the gaff. He sunk the gaff into the tail as Captain Hill ran over to assist in tail-roping the fish, but the fish had other plans.

“The thing went nuts,” said Bach. The gaff hook bent straight open and the fish was off and running again. Remarkably, the hook hadn’t budged and the 60-pound fluorocarbon leader hadn’t torn. Vantine stayed on the rod and worked together with Tanionos—who was hauling in the harpoon rope by hand in synchronization with Vantine’s reeling— as the fish made another run for freedom.

“I couldn’t believe we were still buttoned up to this thing”, Vantine said. The team would later find out that the perfect hook placement is what gave them a shot at landing this fish. “The hook didn’t pull because it was pinned in the bony plate at the top inside corner of the fish’s jaw. There was a good period where the jig was definitely rubbing against the fish’s teeth instead of the leader”, said Tanionos. The strength of their terminal tackle baffled them. On top of the line and leader performance, Bach added “I was on the rod for probably an hour or so toward the end, and I just couldn’t fathom how I was able to turn this fish’s head with this little slow pitch rod. It was beyond impressive.”

With the tuna now boat side, they got a second harpoon in it, and the fish finally succumbed to their efforts. When asked how they felt about the moment they secured their catch, the team was still in shock.

“I should retire from harpoon throws because I will probably never have a better shot under worse conditions in my life after that one “, Tanionos added. “The fish was maybe 15 to 20 feet from the boat, 5 feet below the surface, black backed, while moving at 4 knots, with only a small head lamp to light it up.” As Hill came to port, Tanionos saw the rough outline of the shadow he was tracking with the head lamp turn ever so slightly toward starboard. “It was our best and only shot to throw, as we all knew we were running on borrowed time. “

Tanionos said in the 45-minutes they spent running the fish down out front of the boat, they had the engine in gear at 2 to 3 knots the entire time. “It consistently pulled us, sometimes up to 5 knots”, Hill chimed in. “We were getting towed.”

They steamed back toward shore shortly after, having achieved much more than they bargained for earlier than they had planned.

To land a fish like this with the tackle they had, is a phenomenal feat to say the least. The leader and braid remained in-tact, the rod held up, the reel was never in danger of being spooled, the single assist hook stayed pinned…These are the kinds of stories that create memories that last a lifetime and generate an exciting buzz around the sport of fishing.

Vantine believes that the speed he cranked in the jig is what caused this massive fish to give chase and inhale the jig, which ultimately helped them land the giant in the long run. The placement of the hook in its mouth is what kept the fish hooked, and kept the leader free from chafing against the teeth of the giant tuna. Bach said, “We were fishing for bait, so we literally just got lucky, but it came down to experience and a team effort to land the fish.”

The catch is possibly the largest fish ever caught on a slow-pitch rod. Needless to say, this crew will forever remember the night that the stars aligned, the whales bellowed and the bioluminescence lit their wake for the return trip home.

Did you miss our previous article…
https://www.hardcoregamefishing.com/the-focused-aggression-of-false-albacore/