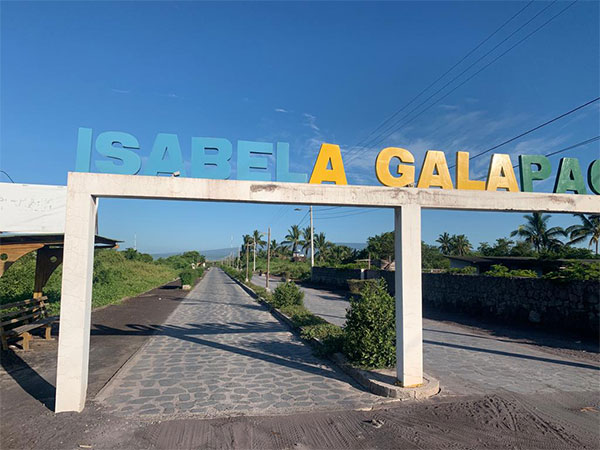 When you fish the Galapagos Islands you are basically on latitud 0 and longitude 90 give or take half a degree depending exactly where you go.  In other words you are fishing the middle of the world also known as the Equator.  Influenced by colder water from the Humboldt Current and warmer waters from the Panama Current the amount of microorganisms attracting life is incredible and unique.  Standing out in a vast Pacific Ocean that is perhaps over 90% a desert, marine life tends to concentrate where there is food.  The confluence of nutrient rich waters along with warmer currents from the West and the North attract plankton, krill, squid, sardines, bonito, tuna and obviously larger apex predators such as blue, black and striped marlin.

Why Are The Blue Marlin Of Isabela Island Larger Than Other Places?

There is no easy answer to why big females congregate off the waters of Isabela Island.  Other destinations such as the FADs off Costa Rica seem to attract mostly male blue marlin which tend to be under 400 pounds.  Migration patterns are not always the same for males as females when it come to blue marlin in the Pacific. The blue marlin in the waters of Isabela Island average 500 to over 1000 pounds.  Clearly these are mostly female blue marlin as males rarely grow over 400 pounds.  For starters the unique layout of the structure and bottom surrounding Isabela Island is unlike almost anywhere else.  The Southern edges of Isabela Island have bottom structure that resemble a huge stair case that goes from 200 to 600 to 3000 to 6000 and then 9000 plus feet deep in an area extending about 12 miles from land.  Much of the structure will cause upwellings bringing nutrients closer to the surface.

The nutrients will attract bait such as squid, sardines, bonito and tunas. Large billfish need to feed on larger or more numerable congregations of food in shorter amounts of time in order to expend less energy.  Bigger fish are heavier and may not be as agile or fit as smaller fish like striped marlin.  Therefore, trying to compete for sardines on the banks of San Cristobal and Santa Cruz islands may explain why there are less blues raised on top of the banks where the faster striped marlin dominate in feeding in packs.  However, try your luck off the bank ledges in deeper water and you have better shots at raising blue or black marlin in the Galapagos Islands.  Off the coast of Isabela you do not have the banks that congregate sardines and attract large amounts or schools of striped marlin thus eliminating the competition for the bigger and slower marlin.

Another theory is that bigger females prefer colder water.  During prime season Galapagos water will run 74.5 to 80 F on average.  Considerably colder than other well known blue marlin haunts like Central America that average year round waters over 80 F.  Some of the baitfish such as greenback sardines which are quite common in the Galapagos thrive in 67 to 78 F water.

Why Fish The Galapagos With Ecuagringo For Giant Blue Marlin?

Ecuagringo was the first company to begin researching off and on the waters off the Galapagos in the 90’s while guiding hunters to help cull feral goat populations.  Our company put the time and effort to find where fish were concentrating and by 1998 we started with the first charter boat to go after what was then known as the fastest striped marlin fishing in the world.  Fast forward to present day as the demand for bigger fish has grown we started to take our chances offering charters where we knew big fish were found and it paid off!

Ecuagringo does more successful striped marlin fishing charters each year than the rest of the competition put together.  Therefore, it is natural that we would be the outfitters of choice to serious tackle the giant blue marlin fishery.  With the only boats in all of the Galapagos to have true 130# quality gear with Alutecnos reels and custom Chaos rods no one else even comes close to offering the right tackle to fish for blue marlin.

Yes it was a learning curve in the beginning and were outgunned when we started with 80# tackle testing the waters.  Quite frankly even 130# tackle is “light” for some of the fish we have encountered.  You could argue that even 200# tackle if existed may not be enough.

If you are looking to challenge the biggest marlin to swim the Pacific and put your ultimate angling skills to the test with sea monsters then you need to consider a trip from February to May fishing out of Isabela Island.

The post Giant Blue Marlin Fishing In The Middle Of The World appeared first on Ecuagringo.

By: Ecuagringo
Title: Giant Blue Marlin Fishing In The Middle Of The World
Sourced From: www.ecuagringo.com/blog/giant-blue-marlin-fishing-in-the-middle-of-the-world/
Published Date: Tue, 13 Dec 2022 16:47:03 +0000