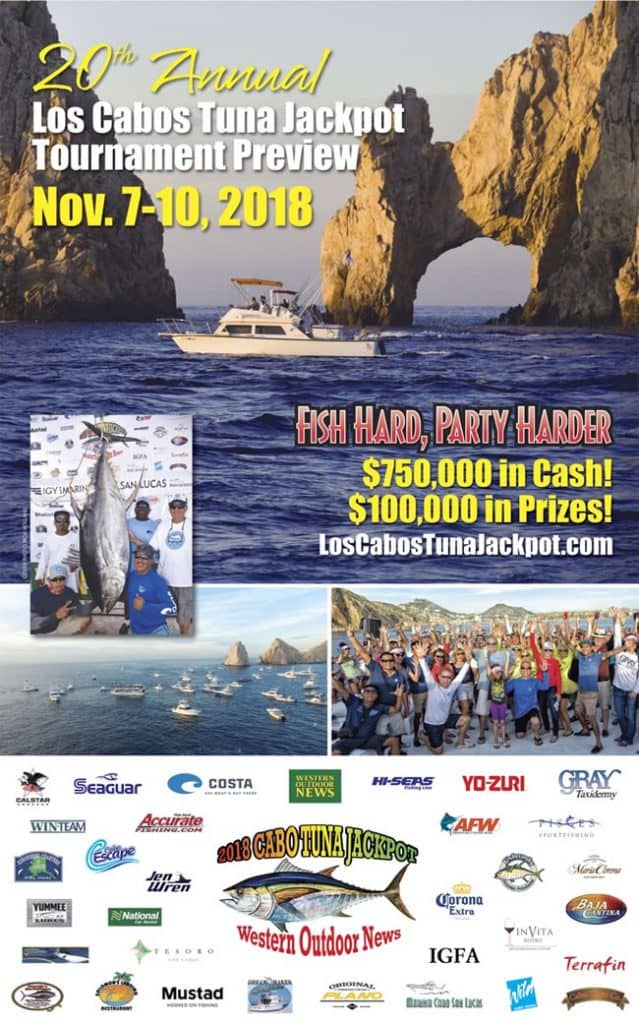 The year is about to end but before it does, the waters of Cabo San Lucas will once again be teeming with fishing boats for another big angling tournament. On November 7-10, 2018, the city will host the 2018 Western Outdoor News (WON) Los Cabos Tuna Jackpot where teams composed of avid anglers from different countries will compete for a chance to win hundreds of thousands in cash and prizes.

This biggest tuna tournament in Baja is staged out of Cabo San Lucas at Lands End where all eyes are set on the yellowfin tuna, a torpedo-shaped fish with dark metallic blue back, yellow sides, and a silver belly. This species can grow to a length of 2 m, weigh more than 200 kg, and live up to six or seven years.

Fighting a yellowfin tuna is no easy feat especially if its a heavyweight pushing more than 200 kg. Just imagine a massive fish like that on the end of your line! You will certainly need every ounce of strength to win a fight against such a formidable marine opponent. If youre planning to join the upcoming tournament then you should be prepared to push your limits because youre in for a tough haul.

Western Outdoor News (WON) is the only sportsmans weekly in the western United States since 1953. It also happens to be the largest weekly fishing and hunting newspaper in the country. Every year, WON takes pride in organizing several fishing tournaments such as the Lake Havasu Striper Derby (May), WON Bass Tournaments, WON Big Bear Lake Troutfest (October), and of course the WON Cabo Tuna Jackpot (November). It began organizing the Cabo Tuna Jackpot in 1999 with an initial total payout of $159,760. The purse money substantially increased over the years as more teams joined the event and the biggest payout was given in 2016 which amounted to $747,500.

A total of 147 teams joined last years two-day fishing tournament which produced 14 tuna (11 weighing more than 200 pounds and three over 300 pounds each). The winners of the Top 10 tuna shared the winnings amounting to a total payout of $677,300.

They say that history has a habit of repeating itself and true enough, the 1999 champion was hailed as the champion again at last years fishing tournament. Team North Star headed by team leader James Rosenwald of Saint Croix won the 2017 Tuna Jackpot after reeling a 338-pound tuna on the first day aboard the Estrella del Norte. The only two-time winner of the overall Tuna Jackpot Championship brought home a grand total winning of $252,425. Team North Star is hoping that the angling odds will be in their favor again this year.

The second place went to Team Turbo Tuna for hauling a 305-pounder on day one on the Judy Judy. Team Turbo run by Francisco Segovia, Gerardo Banaga and Jose Banaga from San Jose del Cabo received $7,250 for their runner-up tuna.

Team Come and Take It grabbed the third overall for their 264-pound tuna caught the first day on the Zorro. The team of Keith Gelfand, Shauni Gelfand, Arthur Diestel, and Mitchell McKerlie of Texas got a check for $3,625.

There will be a voluntary pre-check for teams who have no roster changes on the 6th of November where angler packets, hats, bags, and shirts will be distributed.

A mandatory official registration check-in is set the following day, 7th of November from 1 p.m. to 6:30 pm at the malecon in front of the Hotel Tesoro followed by the Yo-Zuri Welcome Party.

On the 8th of November, a 7 am shotgun start will mark the official start of fishing. Lines should be out at 4 pm and the Gray Taxidermy Weigh-in will be from 3 pm to 6 pm.

A 7 am shotgun start on the 9th of November will signify the 2nd official day of fishing. Lines should be out by 4 pm and the Gray Taxidermy scale will operate from 3 pm to 6 pm. There will be a celebration at Baja Cantinas Fiesta at Maria Corona Restaurant in downtown Cabo from 7:30 pm onwards where you can enjoy a buffet dinner and live music. You can expect the results to be announced around 8:30 pm.

The grand finale will be the Cabo Tuna Jackpot Awards Dinner at the Cruise Line Pier on the 10th of November from 7 pm to 9 pm. where the new champions will be crowned with glory.

Take note that details of the schedule may change so please check the WON’s official website for official announcements.

You can print and fill out the entry form and send it together with the check or money order for entry fee and optional jackpots to Western Outdoor News, Los Cabos Tuna Jackpot Tournament, P.O. Box 73370, San Clemente, CA 92673 or you can fax the form to Lori at 949 366-0804.

An entry fee of $1,000 will get you and three other friends into the tournament. Theres also an array of optional daily jackpots, ranging from $500 and up. If you add the other expenses, the cost of entering the Tuna Tournament per person for a four-man team is roughly around $2,500.

What are you waiting for? You can hire a Cabo tuna fishing boat charterfor a chance to get a big share of this years pot money. The deadline for all entry fees and jackpots must be received at Western Outdoors Publications by Nov. 2, 2018, so hurry up!