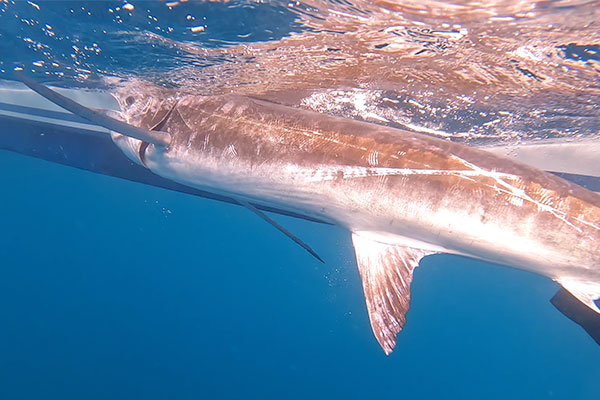 One of the most bitter sweet reports we have produced in a long time is the fact that there are plenty of striped marlin around Santa Cruz and San Cristobal Island. However, if you told us you could go 7 days searching for blue marlin in the Galapagos in January only to have 1 bite we would not believe you.

While it was not hard to raise 20 to 40 striped marlin a day any day in January to so far, blue marlin are nowhere to be found due to the average 71 to 73 F water we experienced everywhere we went in the Galapagos until Jan 25. Terribly disappointed with the SST imagery supplied by www.buoyweather.com who we have been using for years.

We understand forecasting is not an exact science but to be constantly off for almost two weeks from 2 to 4 degrees F anywhere we went in the Galapagos certainly did not help.

7 days of fishing around Isabela Island from Jan 12 to 19 with John Liefso and Jack Franklin only produced 1 bite and 2 blue marlin raised the whole time. Seas were calm but the crew was plagued with unusually cold water of 71 to 73.5 F most days no matter where they ran. In over 23 years of fishing rarely had we ever seen water this cold so late in January.

Bait was scarce, bird non existent and conditions other than being calm were not ideal to produce blue marlin. The crew of the Patricia searched near and far all the known and even some new places with no luck. The Galapagos are one of those destinations that you need at least 75 F water to produce a good blue marlin bite.

Funny as it would seem a week later after wrapping up the blue marlin fishing on Isabela with Liefso group the crew of the Patricia has finally been reporting water 75 F while fishing for wahoo and striped marlin.

Most days of January have been producing for various of our boats fishing out of 0-30 Bank between 20 and 40 raises of striped marlin per day. There has been no shortage of bait, birds and even surface feeding striped marlin. The odd day here and there the stripeys would not feed but where there and the crews would raises lest than 10 fish in a day.

Patricia fished 2 days with John Liefso and Jack Franklin and raised 30 plus striped marlin each day even-though some of the time was spent searching for blue marlin off the bank. Jack and Annie Franklin fished their last day on 0-30 Bank Jan 28 and went 2/3 on striped marlin. By far the slowest day of the year with only 5 striped marlin raised on the bank. It happens some days, thats fishing but the bait on the monitor was thick.

Captain Jonathan Valiente fishing onboard the Mantarraya has fished both 0-30 Bank with similar results as our Santa Cruz crew with 20 to 40 raises per day of striped marlin in January most days. He also reported much slower bite on Rosa Blanca with 5 to 10 striped marlin being raised on a couple of days fishing there. Valiente noted the bait and birds were quite thick on 0-30 Bank every time he fished there. 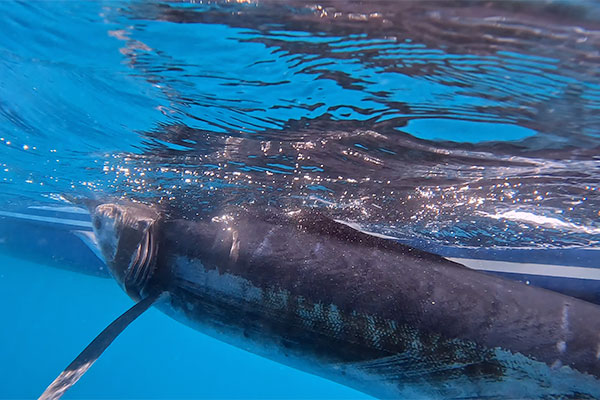 Folks the Galapagos Islands were one of the first international fishing destinations to open back up in 2020 while the whole COVID fiasco was keeping many places shut down. Fishing for striped marlin has been pretty solid all year so book anytime to come down with confidence. We will keep you posted on our giant blue marlin fishery which we expect the bite to turn on anytime now that the water seems to be finally warming up.