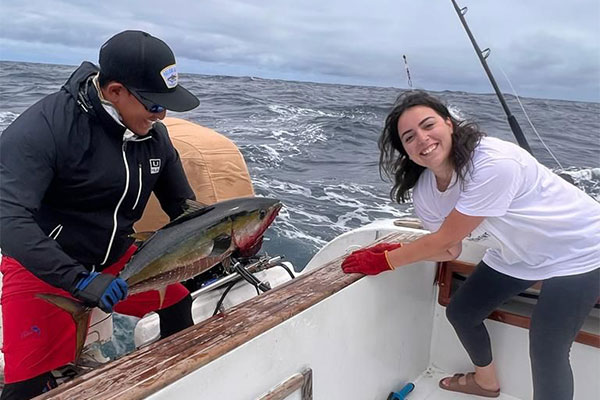 0-30 Bank was put on the international fishing map by Ecuagringo back in 1998 and first sportfished by Braden Escobar and Captain Isaac Marin.  Captain Marin was not a sea captain but rather a crop duster pilot.  His map and GPS navigation skills  would help Escobar and team Ecuagringo explore “new areas”.

When we started our operation out of Santa Cruz the 0-30 Bank was not a favorite or well known by the previous few boats that would travel from Salinas, Ecuador to fish with Ecuadorian anglers.  Using charts and limited technology for 1998 Escobar and Marin worked for almost a year navigating and fishing much of the area around Santa Cruz, Santa Fe, Floreana and Isabela islands.

Escobar and Marin spent a year fishing back and forth every month 0-30 Bank and found almost a constant supply of striped marlin, some blue marlin from January to May and lots of yellowfin tuna.  Due to the size and shape of the bank it was perhaps the best bank to concentrate large populations of striped marlin.

So many fish surface tailing fish can actually be witness at one time that seeing 100 to over 200 tailing striped marlin in a day  was not uncommon back then and still isn’t today.  While the body of all marlin species has decreased significantly worldwide in the last 50 years due to commercial over-fishing there are still days where anglers can experience over 100 raises on 0-30 Bank.

For 8 years Ecuagringo ran the only fishing charter operation available in the Galapagos and eventually were the first to start chartering out of San Cristobal Island as flights became more regular.  In those 8 years thousands of striped marlin were caught on standup tackle, hundreds on fly and dozens on spinning gear.

To this day Ecuagringo continues to be the only outfitter in all of the Galapagos to provide all the equipment you need for light tackle, standup, fly fishing, spinning or even deep dropping with electric reels.  No one else has as many boats, crews and first rate tackle at their disposition and we continue to be the only outfitters that fish every month of the year.

The striped marlin fishery continues to be strong even in the “offseason month” of October.  Seas can be rougher due to increased winds so crews from Santa Cruz and San Cristobal have been fishing the closer bank to both islands called 0-30.  Mantaraya and Johnamar have fished 0-30 Bank this month heading out from San Cristobal and Patricia from Santa Cruz.

October 2, 2022- Mantaraya fishing with local angler Luis Ojeda and Captain Jonathan Valiente headed to 0-30 Bank.  Conditions were choppy but bearable.  They reported raising 28 striped marlin having 12 bites and releasing 2 very nice striped marlin and loosing 5 more close to the boat.  Now keep in mind angler Ojeda is his 70’s and may not be the quickest to the rod and seas being choppy made it harder to fish.

October 14, 2022- Patricia fishing out of Santa Cruz Island with Josh Gillon and family had very rough seas.  Nevertheless when they got to 0-30 Bank it was not long after lines were on the water that they were into their first striped marlin.  Due to the roughness of the choppy seas it made it a bit harder for anglers and crew to work fish loosing to “Palm Beach releases” 5 fish and finally getting one for a full release close to the boat on lures.  They had 9 bite saw over 25 fish tailing and raised 15 striped marlin. They also caught 5 small yellowfin tuna that made for a great dinner and fresh sushi.