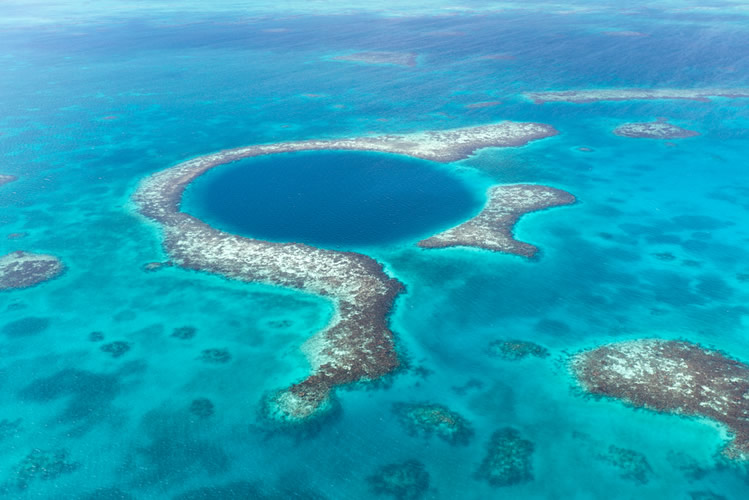 Belize is, simply put, an angler’s paradise. There’s nothing clich​​é about it. With such diverse angling opportunities, this Caribbean gem needs to be on your bucket list. And if you’re a lover of lagoons and barrier reefs, each more enticing than the next, fly fishing in Belize is just the thing for you.

With the second-largest barrier reef in the world and beautiful lagoons, it seems like Belize was meant for fly fishing. Nestled between Guatemala to the west and south and Mexico to the north, it offers endless flats teeming with fly fishing favorites.

In this guide, we’ll talk about what Belizean fish you can catch on the fly, the best spots to do it, and more. So, without further ado…

What to target when fly fishing in Belize?

If you’re planning on booking a fly fishing trip in Belize, chances are you’re after the Grand Slam. These are Tarpon, Permit, and Bonefish – the crème de la crème of the local fly fishing scene.

It would be unfair to say that the Belizean Big 3 are the only potential targets for fly fishermen, though. Other species are also available both inshore and nearshore, including Jack Crevalle, Snappers, Triggerfish, and even Mahi Mahi and Sharks.

But first things first, let’s go through each member of the Grand Slam.

It’s hard to name a more iconic and challenging fighter than the “Silver King.” Tarpon fishing in Belize is so popular, there’s even an island called Tarpon Caye. Ask any local angler to talk about their favorite Tarpon “jump,” and you’ll most likely hear a lot of fish stories.

Fly anglers can look for Tarpon in a number of local rivers, shallow flats of the estuaries, channels, creeks, and lagoons. You can find large Kings all throughout the mainland from south to north, as well as the northern cays. Fly fishing for Belize Tarpon is somewhat seasonal, peaking during the summer months.

Chances are you already know that Bonefish are some of the most popular saltwater fish species in the world. If we’re talking about Belize, there’s a good reason for that. Here, Bonefish are plentiful. Fly anglers will be in their element in deep soft bottom lagoons and shallow coral flats throughout the country, although Turneffe Atoll offers arguably the best Bonefishing in Belize.

Bonefish are more eager to eat a fly from March through November. However, you can still target them pretty much year-round, especially if you take the tide, moon, and weather into consideration.

As the “Permit Capital of the World,” it’s no surprise that these creatures complete the Belize fly fishing Grand Slam. Check out the southern ends and Permit Alley for prime fly fishing grounds, although you can find Permit pretty much anywhere inshore. Look for “tailing” Permits on the shallow flats in Placencia, Punta Gorda, or Turneffe Atoll.

Belize Permit season also hinges on tides, moon, and weather. The period from late November to early March is generally slower due to the “north fronts,” while April through October is perfect for a Permit fly fishing trip.

Now that we’re done with the Grand Slam, it’s time to mention other interesting species you can catch on the fly. Among the most interesting catches are acrobatic Snook, which you’ll find in coastal rivers, mangrove creeks, inland lagoons, and tidal channels of Belize. Snook also tend to school up at the mouths of the channel cuts during a windy or rainy period.

So, when is the best time to go fly fishing for Snook in Belize? These fast and furious fish are generally available throughout the year although you may want to hit the waters anytime from November through April. Just in time to take a breather from Grand Slam fishing!

Last but not least, Barracuda are another great target for fly fishing in Belize. Sometimes overlooked, these fish are known as “the wolves of the flats” due to their aggressive temperament. You can head to one of the Cays for Barracuda but don’t expect to land a large trophy. “Great” Barracudas are mostly found in deeper waters.

Fly fishing for smaller Barracuda on the flats is available year-round. Some locals recommend using needlefish patterns to make your target eat a fly, since local Barracudas reguarily feed on needlefish.

Where to Go Fly Fishing in Belize

Belize may be a small country, but it’s blessed with hundreds of miles of protected flats ideal for fly anglers. The northern part offers more diversity when it comes to Tarpon, Snook, and Bonefish. The south, on the other hand, is much less busy. In this section, we’ll go through the most popular and productive spots in Belize. Read on…

Fly fishing in Amergris Caye is called heaven on earth by both locals and visitors. This tropical paradise is located in the heart of the Mesoamerican Barrier Reef, although reef fishing isn’t its main attraction.

What is, then? Well, the endless flats, estuaries, creeks, bays, and river mouths are what’s so attractive to fly anglers, with opportunities to catch world-class Tarpon, Permit, and Bonefish. If the Belizean Three isn’t enough, you can also chase Barracuda, Snook, and Jack Crevalle. There’s hardly ever any boat noise or crowds, just endless flats all at your disposal. Plus, fly fishing in the Amergris is year-round.

Fly fishing in Tarpon Caye is an intimate experience with no rush, no crowds, and no worries. It’s located in the heart of Victoria Channel, just 15 miles east of Placencia.

Anglers come to local lodges for wading, hoping to find trophy-sized Tarpon. We have to admit, though, that the Silver King isn’t the only potential catch here – you can also fly fish for tailing Permit or try your luck at the Belizean Grand Slam.

Permit Alley is a 30-mile chain of cays, nestled between Placencia and Dangriga. As the name suggests, it’s one of the best places in the country (and arguably the world) to fly fish for Permit, although you can also count on amazing Bonefish and jumping Tarpon.

Fly fishing in Permit Alley is a good opportunity to stay away from the crowds and enjoy fishing for the Grand Slam on the endless flats. And, of course, there’s always something biting.

While Belize is considred the best place for fly fishing for Permit in the world, Turneffe Atoll is the best spot for Permit fishing in Belize. Such a strong argument is supported by local anglers, who enjoy the opportunity to try different flies, styles, and rhythms and target a whole school of fish.

Finally, fly fishing in Punta Gorda allows you to get a taste of Southern Belize. Here, you can take in the mountains of Honduras and enjoy the soft mud bottom lagoons and schools of Permit on the pancake flats.

While Punta Gorda is an excellent fly fishing spot for Permit, you can also explore the flats and lagoons and see if something else will eat your fly. This area is also known for its Tarpon fishing opportunities, but who knows what else you may find at the end of your line?

When to Go Fly Fishing in Belize

With its amazing climate, fly fishing in Belize is a year-round pleasure. Average temperatures vary between 75 and 80 degrees throughout the year. However, there are a few things you need to keep in mind when planning your fly fishing adventure.

The dry, so-called tourist season begins in December and lasts through May. Normally, the winter months are cooler, while April and May are the hottest months of the year. There’s little wind, so this time is perfect for a fly fishing trip. The rainy season, on the other hand, offers less fishing pressure.

When planning your Belize fly fishing trip, you may want to learn more about the specific tides. A rule of thumb is that a new or full moon are good tides for fishing. If you’re fishing with a local guide, consult with them to see when’s the best time to go fly fishing.

Whenever you decide to go fly fishing in Belize, you’ll want to make sure to get a fishing license first. There are various types available, including daily and weekly permits. You can purchase those online. If you’re interested in the annual option, you’ll need to apply at the Coastal Zone Management Authority and Institute in person.

Another thing to keep in mind is fishing within the law. The Grand Slam species are strictly catch-and-release, so you’ll need to release your Bonefish, Tarpon, and Permit back into the water.

Finally, one of the most important ingredients of a successful fly fishing trip in Belize is having the right flies. If you book a trip with a local guide, you’ll be able to worry less about what flies work best for each species and concentrate instead on catching fish.

Fly Fishing in Belize – A Sight to Be Seen

Belize is indeed any tourist’s paradise, with ruins of the ancient Mayan civilizations, rousing beaches, lush jungles, and, of course, friendly people, and authentic fishing playgrounds with incredible aquatic life. There are so many spots to explore, especially for a fly angler. Whether it’s the tailing Permit, large Tarpon, or the elusive Bonefish, fly fishing in Belize rarely disappoints.

Have you ever been fly fishing in Belize? Any stories you’d like to share with us? Let us know in the comments below!