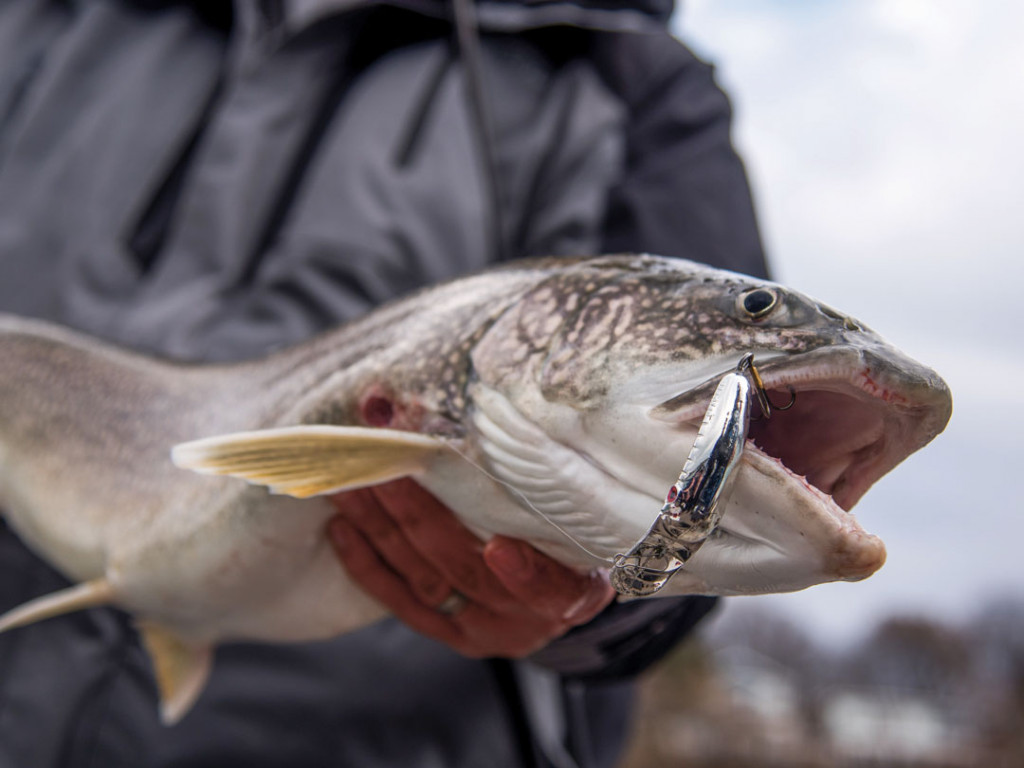 “We might not have long out here before it gets too rough,” said Captain Frank Campbell as he positioned the boat for the first drift of the morning. Joe Cermele took to the bow while I found my balance in the stern and cast a ¼-ounce jighead-and-paddletail combo toward the rough water that marked the shoal in front of us.

It was classic rip fishing, similar to what I’d done six months earlier at the famed striper grounds southeast of Cape Cod, where the strong currents of Nantucket Sound deposit sand as they round Monomoy and enter the Atlantic Ocean.

Similar forces were at work some 500 miles from Monomoy, as the raging current of the Niagara River gathered up sediment as it ramped off the falls, slalomed through the gorge, and exhausted its might at the outlet to the smallest Great Lake. The resulting Niagara Bar extends miles into Lake Ontario, and its changing depths, between 18 and 80 feet, attract bait and gamefish year-round. Instead of the stripers, blues, and occasional fluke found at Monomoy in June, a fisherman on Niagara Bar in December is most likely to encounter brown trout and lakers.

Until 2019, the Lower Niagara lake trout season closed between October and January to protect the fish during the spawn. In most waters, lakers spawn over open-water reefs, but in 2005, researchers confirmed that lake trout were spawning in the Niagara River. Despite the no-target regulations of previous seasons, anglers found it impossible to avoid hooking lake trout as the fish stormed the river in the fall, feeding heavily before, during, and after the spawn.

Lake trout have voracious appetites, and in waters where they’ve been introduced, legally or illegally, they can eat the native species out of house and home. However, while Lake Ontario’s most sought-after salmonids—the king salmon, steelhead, and brown trout—were introduced, the lake trout is native. As one of the lake’s top predators, alongside the Atlantic salmon, lake trout were abundant and widespread throughout Ontario until unregulated fishing and sea lampreys wiped out Ontario’s lakers by 1950.

Sea lamprey are one of the world’s most ancient fishes. These jawless parasites have cartilaginous skeletons and disc-like suckers that they use to feed by latching onto larger fish, scraping a hole in its flesh, and drinking its blood. In the Atlantic Ocean, where the species evolved alongside robust predators like tuna, sharks, and striped bass, a lamprey can feed without mortally wounding its host; however, in Ontario, and the other four Great Lakes, the lamprey’s kiss often resulted in death from blood loss or secondary infection.

Early efforts to restore the lake trout failed because of too many lamprey and too few lakers being stocked. Through techniques to control the lamprey population (including poisoning the larvae in spawning creeks) and improved stocking efforts, lakers have been back in Ontario, delighting anglers, for nearly 50 years. Stocking is still necessary to sustain the population, however, there were 310,000 juvenile lakers stocked in Lake Ontario in 2022.

The lake trout’s history in Lake Ontario was far from my mind as my paddle-tailed soft plastic swam toward the bottom of Niagara Bar. After touching down, I began sweeping the rod upward, allowing the lure to settle until the boat’s drift made it difficult to feel bottom. On my second cast, a fish intercepted the paddletail on its way to the bottom. When I set the hook with my medium-action spinning rod (similar in length and action to the inshore rods favored for schoolies and false albacore), the pattern of deep, heavy headshakes might as well have been morse code for “L-a-k-e T-r-o-u-t.”

Lake trout fight like a slow-motion striper, delivering haymaker headshakes and throwing their weight around rather than sprinting or jumping. Whereas stripers like to run out, lakers do their best to stay down, pumping their deeply forked tail to keep them away from the surface.

The average Niagara laker in the late fall and early winter is about 30 inches, so it’s unlikely to see one smaller than 24 inches. The Lake Ontario record is 39 pounds (the New York State Record of 42 pounds came from Erie), and while 30-pounders are uncommon, 20-pounders are a possibility. When my fish emerged next to the boat and Frank lunged with the net, it appeared to be a bit above average. Like all lakers, it had a large, blocky head and cavernous mouth that gave it a reptilian look. Its green flanks were covered in cream-colored spots that combined and morphed into vermiculations on the fish’s back reminiscent of tribal tattoos. The fins and tail were a pale yellow, though on the males, these ignite to a fiery orange during the spawn.

With a cold northwest blowing directly at us from Toronto, conditions deteriorated—as Frank had predicted—but not before we’d made a dozen drifts over the bar, hooking fish on most of them.

Frank then took us upriver to the Artpark stretch of the Lower Niagara, named for the riverside music venue in Lewiston, New York. There, the river begins to widen below the last set of rapids at the ominously named Devil’s Hole. The series of eddies and current breaks here are a holding area for large numbers of lake trout as they feed and spawn. At times, the lakers are so thick in this stretch that they can be a nuisance to fishermen hoping to hook steelhead or brown trout, especially in October and November, when the laker season is closed.

The change in location required a change in tactic. The faster drift made casting jigs impractical, so Frank stowed the light spinning rods and broke out long, moderate-action baitcasting setups rigged with pencil weights, three-way swivels, and Mag Lips.

The Mag Lip is an updated design of the classic FlatFish lure. The Flatfish was designed in the 1930s by Charles Helin, who was looking for a swimming plug that maintained its action at slow speeds. The resulting lure had a flat look, a banana curve, and a wild, wobbling action at all speeds. The Mag Lip has enough action to wobble and kick as the boat drifts down the river, and the action, combined with the flash, is what triggers reaction strikes from lakers.

However, the Mag Lip doesn’t dive deep enough on its own to reach bottom-hugging lakers, so Frank constructed a three-way rig to help get the bait down. To one ring of the three-way swivel, he attached a 4- to 5-foot fluorocarbon leader to the lure. On the second, he attached a 12- to 18-inch length of leader to a long, thin sinker that, when fished properly, walks along the bottom, resisting snags. The third was attached to the monofilament mainline.

To fish this rig, Frank instructed us to drop to the bottom and take a crank. The idea was to occasionally feel the sinker ticking bottom, but not dragging. This required paying attention since the depth changed quickly throughout the drift, causing Joe and me to let out and take in line to keep the Mag Lips skimming the bottom.

The hits came quickly in the Artpark as lakers to 36 inches attacked our plugs. While the fights had been exciting on the bar, in the river with the drifting boat and swift current, the lakers felt even stronger. The fish were using the current and their weight to hold just out of net range, forcing us to bring the 12-pound-test leader right up to the breaking point to turn their heads and get them to the boat.

Frank also catches lakers on egg sacs, beads, and live emerald shiners. In general, lakers aren’t picky eaters, especially compared to the notoriously finicky steelhead and browns. The water clarity can have a significant impact on the bite, however. In ultra-clear water, lakers slide off the riverbank into deeper water, where they can get a bit of lockjaw. In muddy water, they are often shallower, but the bite can be tricky because the fish can’t see the baits. The sweet spot is slightly stained water, in which the lakers, along with steelhead and browns, bite well close to shore.

While we drifted, we passed a number of fishermen on shore who were also fighting lake trout. There are great opportunities to catch these fish from shore as well, though the hiking in and out of the gorge can lead to some sweating and heavy breathing—especially if you’ve been availing yourself of the region’s unbeatable hot wings.

We released most of our lakers but did take one home for the table. Frank noted that lakers aren’t the most popular table fare among his clients, but some fishermen do take them to eat. When we cleaned the fish at the Lewiston Landing fish-cleaning station, it appeared to be spawned out but had clearly been eating the eggs of other spawning fish. The flesh was pale orange and noticeably fatty, which made it perfect for the smoker.

Overall, December on the Niagara Bar and River provides the best fishing for lake trout you can find without taking a float plane into a remote Canadian lake. The fish are large, abundant, and aggressively hungry, and while the fishery is still sustained by stocking efforts, there are positive signs that these fish are beginning to spawn successfully in the Niagara, which could help bring this fishery to even greater levels.

The post Early Winter Fishing for Big Niagara Lake Trout appeared first on On The Water.

Did you miss our previous article…
https://www.hardcoregamefishing.com/south-jerseys-foam-fly-savant-carl-harris/