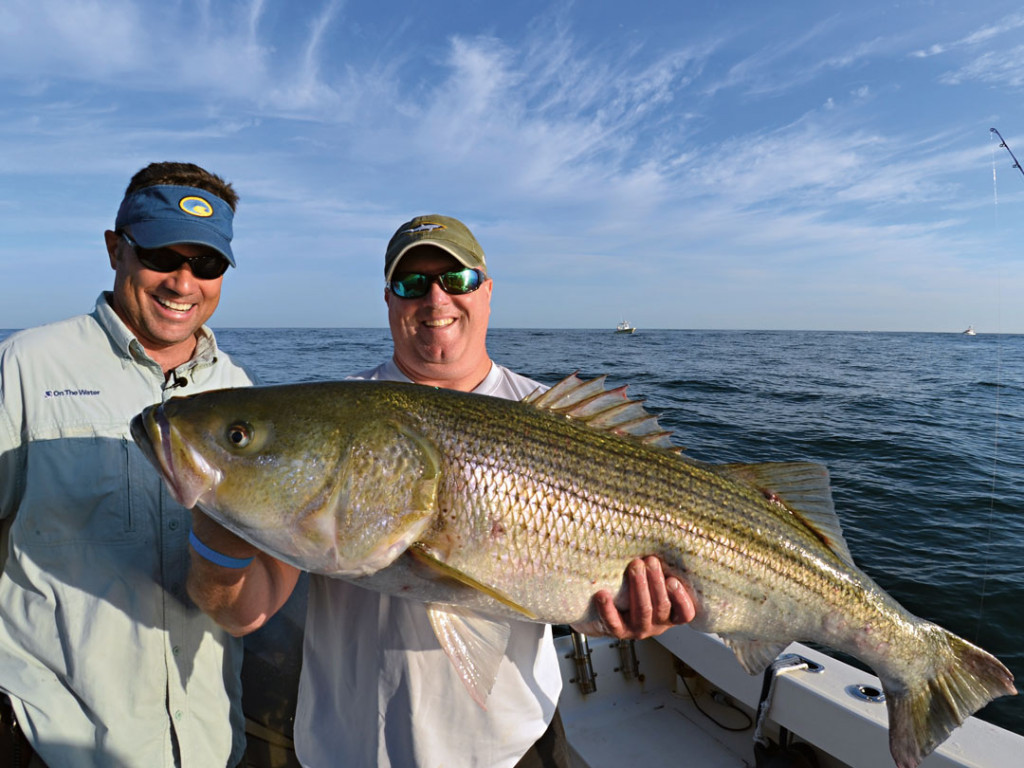 The stylus on the aged but dependable Lowrance X15 paper chart recorder was scratching a line along the top edge of the ridge before we reached the crest. There, we began a steady descent, sliding down the jagged slope on the force of a gentle northwest breeze that pushed us offshore.

We were targeting tog in late October, a time when most of the larger stripers were migrating westward along our rugged New England coastline. Two hours before our bottom probing, we’d plugged up a dozen westward-bound schoolies, satisfying our compulsion to extend the bass season up to the first frosty days of November. A few choggies had begun nibbling on the exposed sections of the green crabs when I felt a solid strike that snapped the rod down and nearly jerked it from my grip. Unlike the double tap of a white-chinner, this fish hit and ran, causing me to rear back and set the 4/0 Kirby. This wasn’t an up-and-down-battling tog. At the sting of the hook, the fish ran off 150 feet of line on the moderate drag setting until I made a slight adjustment and was able to halt its progress before it took off on another sideward sweep. Looking at the recorder, I saw three targets at 58 feet, some 4 feet above the 63-foot gray-line bottom level.

My friend Andy set his rod in the holder and walked over to admire the arch in the rod as line peeled off the now-stiffened drag. Because of the smaller hook, I gave the fish more of its head than I would have liked, but it was tiring, and the runs were now reduced to stubborn circles off the port stern. The first sign of color revealed a long silver fish with dark black stripes, under which my mate slipped the big net. Flopping on the deck with the black tog hook firmly set in its jaw was a muscular 25-pound-class linesider that had taken a shine to a green crab on the half shell.

Andy turned, then bolted for the stern, where his rod was bent and the spool on his Jigmaster was giving up line like he was tied to a westbound freighter. The specially treated white paper on the chart recorder exuded a burning scent as the sharp stylus etched lines on the coated surface, methodically scratching its way down a slope that dropped from 33 to 80 feet and showed targets holding a few feet off the bottom. Andy quickly bested his fish, and in short order, we were looking at a pair of husky linesiders that had been grubbing along the side of a gradual slope located a considerable distance offshore from the famed striper grounds near Newport’s Ocean Drive.

Prior to that incident, I’d routinely captured stripers in depths from 32 to 54 feet and occasionally much deeper in the holes off Gay Head’s Devil’s Bridge and New York’s Race, where stripers and blues were extricated from nosebleed depths approaching 180 feet. We didn’t catch another striper that day, but when I filleted the bass at home, I found several juvenile tautog, some jumbo cunners, and a few Jonah crabs in their stomachs.

Since the day of the green-crab stripers, I religiously dedicate time to examine and explore a few of my favorite striper holes on each trip after a morning of pre-dawn plugging or casting eels into the whitewater washes. Fishermen are creatures of habit, and because many of us began fishing from the beaches and caught fish within the range of our casts, we adapted to this nearshore mentality about where to locate stripers. That is the root cause of surf fishermen casting out as far as their equipment and talent will allow while anglers from boats cast toward rock piles along the shores. When this mindset prevails, we subconsciously rule out hunting stripers in their deep-water lairs and persist in fishing the nearshore waters, even through the warm summer months when larger specimens are usually just a short (although deeper) distance offshore.

To appreciate searching cooler and more protected waters for stripers, it’s necessary to understand that “deep” is a relative term. One foggy morning, I was trolling along the top of the hump off Squibnocket where I usually begin jigging with deadly 2-ounce Rich Andrus parachutes. It is usually a busy location, though once the current begins to crank, the other boats begin dropping out, and it’s seldom because the fish stopped eating. At the onset of the tide change, those 2-ounce chutes are tending bottom and being presented to fish in the strike zone; however, once the current begins to haul, it becomes necessary to snap on a 3-, 4- or 5-ounce jig and move off to the down-tide ambush locations, areas that big stripers prefer when it becomes too strenuous to work against the current. After fishing a location for an extended time, it becomes obvious to the savvy angler as to where to look for stripers at various stages of the tide, particularly those periods when the currents are pulling hardest. As most other boats headed off to other locations, I moved off the top of the shoal to the edge where the bottom drops from 24 to 33 feet. Switching to 4-ounce chutes, I began fishing along the bottom edge and continued to catch at a rate as good as or better than before. I increased the depth only about 20 feet, but that drop made the difference between steaming to a new location in search of fish and staying right in the same area and hooking up until the tide went slack.

Another example of the importance of becoming familiar with probing the depths is the various choices available when fishing locations in Vineyard Sound. In late July a few years ago, there were bass and bluefish breaking all around Norton Point and east and west of that productive section of the Vineyard’s North Shore. Those fish were feeding on fine bait in the form of juvenile silversides and other small baitfish, the size of which doesn’t usually interest larger stripers. I moved just outside the contour line between 28 and 44 feet which, with the prevailing south wind, took me into depths of 60 to 80 feet. A friend and I were fishing live eels on three-way rigs and catching bass to 34 pounds that were feeding on much larger forage. When we pulled into Menemsha later that afternoon, I opened a bass up and found juvenile scup to 9 inches, several sea robins, an 11-inch fluke, and numerous sand crabs. The heavier bass were not only holding in the cooler, more comfortable water, they were also expending much less energy while feeding on larger forage that habituate closer to the bottom. I’ve fished this same area during the June John Havlicek Genesis Fund tournaments when live herring was an option, and we caught bass to 39 pounds live-lining them off Norton Rock in 75 feet of water. I now believe these same bass make forays inshore at night, where they are able to push larger prey up against the shorelines, but under a bright midday sun, the larger specimens can be found in depths up to 90 feet and beyond.

Regardless of what you call them, be it sonar, fishfinders, chartplotters, or in my case, magical boxes, keep your eyes on the screen for icons, targets, or even slight variations in the bottom because they will put you onto fish-attracting structure that will result in finding larger stripers. Using today’s highly sophisticated electronics, such as my Humminbird Helix 5 sonar unit, I can fish much smarter and more efficiently, which will be particularly important during the coming season of higher fuel prices.

The author prefers lures he can scuttle along the bottom, which he believes is more natural than the yo-yo presentation provided by metal jigs. For this application, he prefers soft-plastic or bucktail jigs. When more weight is needed to reach bottom, and the fish, he uses a large jig, rather than a sinker, to get the presentation down, and therefore two offerings are presented to the bass.

Finding the fish is only half of the equation; once you locate them, you have to make them eat. Many fishermen I speak with report finding larger stripers in deep water but lament not being able to catch them, and I think I know why. To give yourself and the location you are fishing the best possible effort, you must be in the strike zone, an area I consider to be no less than six feet off the bottom. If they can see or hear your offering, even non-feeding fish might strike out of annoyance or in reaction to something violating its space.

One mid-morning last August, a client I’d tutored on his new boat and rigged three tube-and-worm outfits for, approached my boat while my deckmate, Mike, was tight to a teen-sized striper. He came along, much closer than I appreciated, and yelled, “Wow! Look at the screen!” There were numerous pods of bait and targets from 40 to 55 feet. I nodded and went up for a second drift on which Mike and I doubled up. After making several passes without a hit, the former client became frustrated. I reminded him that he was trolling much faster than three knots and not presenting his tubes deep enough. I suggested letting out another color of leadcore line and trolling with the tide. On his next pass, he hooked up on his port rod.

Using a three-way rig or heavy, sweetened bucktails and paddletail shads is one way to determine depth. If you are occasionally bumping bottom, you know you are not fishing too high above the strike zone. The latest craze are mojo-type rigs, which tend to be very heavy. If I had to choose one of those, it would be the USA-made Runoff Lures in 6 to 12 ounces.

In sand and gravel bottom, I occasionally bounce my lures to create both vibrations and visual effects, and I always add a liberal amount of scent, which usually seals the deal with finicky fish. Whether I’m fishing 30 or 90 feet, I try to avoid weights or sinkers to get down in the zone, and instead employ the heaviest jigs for their weight and fish-catching capabilities. If I am fishing a 3-ounce Tsunami shad as a dropper, I get it down much faster and more efficiently with a 6-ounce jig. That jig will have a nylon skirt and a large paddletail, such as a Gulp or scented Fish Bites. I’ve used 6- and 8-ounce Tsunami Fluke Balls with teaser tails, which have been great producers of stripers, fluke, and big sea bass.

I should confess that although I have jigged up numerous stripers on diamond or butterfly-style jigs, I prefer to walk my offerings along the bottom rather than fishing vertically because I believe it is a more natural presentation.

I have teased predators to come off the bottom to chase large plugs and live baits; however, you can’t beat going down to where they are and fishing a few feet off the bottom, though going deep is not for everyone. If you are satisfied with your results fishing higher in the water column, I have no intention of dragging you out of your comfort zone. But, if you’re serious about catching bigger fish, try working deeper holes and drop-offs during the middle of the day. This will result in opportunities at linesiders you’d otherwise never encounter.

The post Deepwater Stripers appeared first on On The Water.