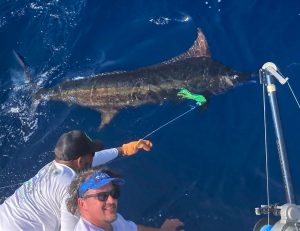 About 50 teams of four anglers each that won qualifying events held around the world will gather to see who comes on top in this prestigious annual event. The teams will be randomly assigned to a boat, the list made up of top Costa Rica charter boats and private boats that fish Costa Rica and come from all major Costa Rica sportfishing destinations. Four days of fishing (April 25, 26, 27 and 28 this year) are scheduled. Each day, the teams fish on a different randomly selected boat.

At the end of the four days, the overall winners are selected: the top team scoring the most points (100 for each sailfish released; 500 for each marlin), top boat, top angler, etc. The competition also offers daily prizes. In addition, the prizes, especially the cash prizes are pretty awesome! Furthermore, anglers receive points and prizes for dorado (mahi-mahi) and yellowfin tuna over a certain size.

This tournament marks the end of Costa Rica’s high season. As of May 1, the Green Season’ officially begins.

The fishing off Quepos has been pretty good lately, auguring for an exciting tournament and lots of action. For example, anglers from the UK on the 31ft Good Day with Captain Manuel Gabuardi out of Pez Vela Marina released three sailfish, and lost another three. Furthermore, they then rounded things off nicely with a 57-inch dorado (right) of around 30lbs.

In addition, anglers on an earlier half-day trip on the same boat caught four solid roosterfish and a mackerel. The largest rooster taped out to a Trophy-sized 63 inches!

Also, a bit north of Quepos, at Los Sueños Marina, anglers on the 34ft Epic with Captain Michael Alligood went 1-2 on blue marlin (top left), pulling the hook on the second. They also released two sailfish from four bites, and saw one more. Furthermore, to cap things off, they kept a couple of nice tuna for dinner.

The Green Season looms. Don’t miss out. Come to Costa Rica and fish.

The post A world-class international billfish tournament in Costa Rica ends one season, ushers in another appeared first on Sport Fishing Charters |®FishCostaRica.

Did you miss our previous article…
https://www.hardcoregamefishing.com/orlando-florida-tropical-escapes-vacation-home-2/