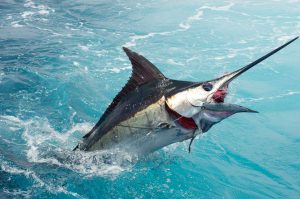 No-one but Costa Rican citizens and legal residents can travel to Costa Rica before June 30. This is where things stand now. But once travel is allowed, consider a relaxing Costa Rica fishing vacation.

The Los Sueños/Jacó area on the Central Pacific coast draw thousands of anglers who want to target sailfish and marlin, along with other offshore species. Quepos/Pez Vela Marina also attracts anglers eager to enjoy a Costa Rica sportfishing experience. Costa Rica has major sportfishing destinations on both its Pacific and Caribbean coasts. Anglers flock to both to catch a wide array of prized gamefish. Call FishCostaRica at 1-800-407-9438 from the USA; 1-858-736-9031 from the USA and Canada; +506 7125-8852 on WhatsApp or from anywhere else, or email americanacostarica(at)gmail.com. 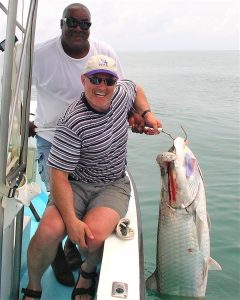 FECOP provides great information for saltwater anglers looking to fish Costa Rica, or who have fished here before!  Their latest bulletin features tarpon. Tarpon are incredible gamefish. Boating a 70lb tarpon is like pulling a 1949 Buick from the bottom of the ocean. In addition, tarpon are one of the oldest fish in the ocean, surviving from prehistoric times.

So for those looking for something different, Costa Rica’s peak season off the Caribbean coast begins in September. By then, it should be okay to travel. For the past 25 years, FishCostaRica has been arranging tarpon charters and complete sportfishing vacations with Captain Eddie Brown, whose fabulous tarpon jumping video is featured on the FECOP page. Eddie is considered Costa Rica’s top tarpon fisherman/guide. Therefore, if you can get away this autumn or early winter, fish for this incredible gamefish with Captain Eddie Brown. Contact FishCostaRica for all-inclusive fishing packages.

FishCostaRica has been in the entertainment business of catching fish for over 30 years.

So come to Costa Rica.

Contact us now for an awesome Costa Rica sportfishing adventure.