Since May 2021 when I took a fishing road trip to the Florida Keys with my good friend, Jimmy Fee, my 10-year-old son Tyler had been asking, every day, when we could take a road trip together to go fishing outside New Jersey. Given that his limit for car rides is usually 2 to 3 hours, I figured renting a van and driving 24 hours straight through to Key West and back (as Jimmy and I did) might not be ideal for his first experience. In fact, there were times when I questioned my own sanity during that initial trip when Jimmy insisted on listening to podcasts at two times the normal speed for the entire ride.

Instead, I settled on Virginia Beach as our destination and cobia as our target. I booked two days in late June 2022—right in the heart of the May to September cobia run—with Captain Robbie Bryan of Reel Release Sport Fishing. After an hour ride to the Cape May-Lewes Ferry and an hour-long ferry ride across Delaware Bay, it was a manageable 3½-hour drive to some of the most productive cobia fishing grounds on the East Coast.

We met up with Captain Robbie and his mate, Caleb, at 8 am on the morning of our trip and loaded the 25-foot Lookout center console. We began our trek across the Chesapeake Bay to hunt for a fish that I have briefly seen several times while fishing off New Jersey but have never been lucky enough to catch. Along for the trip with us was my father, Jerry, and his good friend, Joe McGraw. 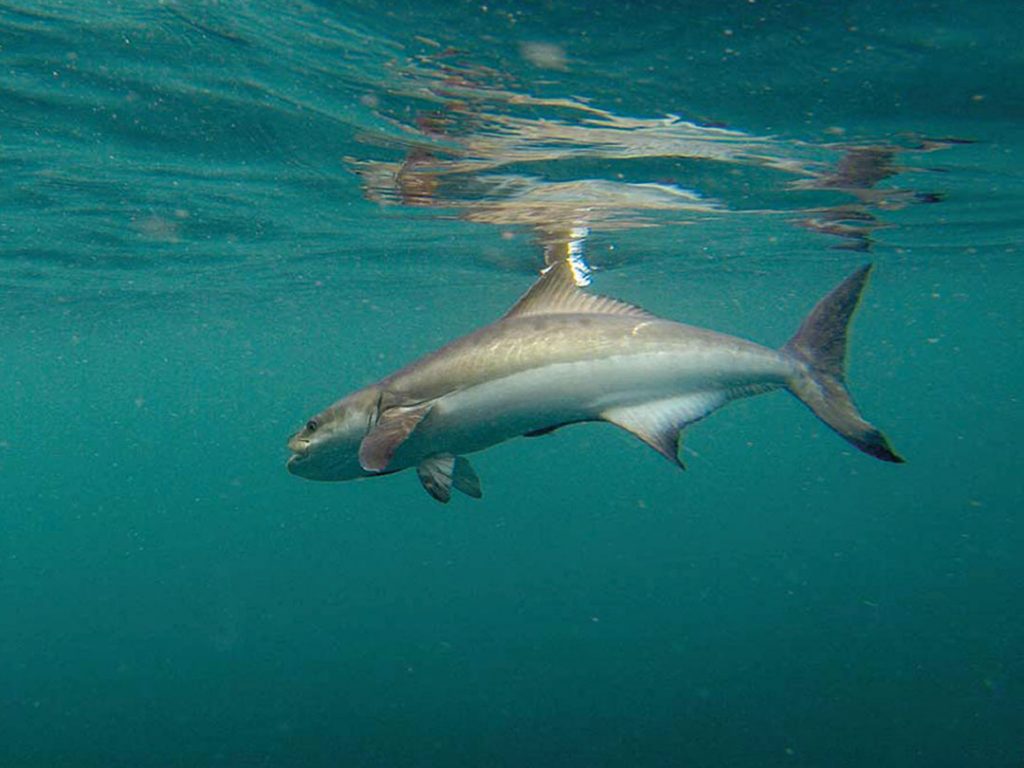 With a sharklike appearance and no close relatives, cobia are a strange and unique species unlike any others in our waters. They have a worldwide distribution and can be found from Massachusetts to Argentina, along the west coast of Africa, and throughout the Indian Ocean. The species grows to sizes larger than 100 pounds throughout its range, and the world record, standing at 139 pounds, was caught in Australia.

Cobia spawn in coastal bays and estuaries when water temperatures are in the mid-70s. They begin spawning at 2 to 3 years of age, or at about 24 inches for males and 31 inches for females.

Cobia are aggressive predators, with crustaceans making up a large part of their diet, accounting for one of the species’ many nicknames, “crabeater.” They also eat squid and fish

Cobia have a habit of following larger species like sharks, rays, and sea turtles at the surface. They also hang around wrecks, reefs, floating structure and, in the Northeast, on the outskirts of bunker schools.

While cobia are favored as a sport fish because they grow to large sizes and fight hard, they also make excellent table fare. Their firm, white fillets have a mild, buttery flavor, good for searing, baking, grilling, or blackening.

After a 30-minute run, we reached the Chesapeake Bay Bridge-Tunnel and began our search. Captain Robbie and Caleb got situated in the tower, a rarity on center consoles back home, but a must-have modification for cobia-hunting boats in the Mid-Atlantic. The tower had boat controls that allowed Robbie to run the boat while scanning the surface for the dark-brown backs of cobia. In the rod holders were two rods rigged with live eels waiting in Yeti buckets until the target was spotted. Several other rods rigged with bucktails were also stationed aboard, ready to cast.

The morning started off slowly, with the few fish we spotted shying away from the eels and bucktails, disappearing from sight. It made little sense to me that an aggressive predator like a cobia would resist an easy meal like a live eel. However, Captain Robbie explained that the fish are actually bottom feeders and come to the surface only to help with digesting their meals. The sun’s warmth helps speed up their metabolism, which is why anglers see cobia lazily swimming at the surface on bright, sunny days.

Then, as if someone flipped a switch, the cobia began to attack our baits. Captain Robbie motored over to a fish he spotted on the surface, cast a live eel from his tower right in front of its face, and our day had begun. Tyler was up first and, after several minutes, he had a new species checked off his list. The fish was several inches shy of the 40-inch minimum, so after a couple of quick pictures, it swam away to grow bigger and be caught another day.

Only a few minutes passed before we spotted the next fish on the surface. Captain Robbie shouted that it was a nice one right when it grabbed the eel on the surface and took off. I was on the rod and could tell it was a larger fish, but I was unsure of what to expect since it was the first cobia I’d ever fought. The fish seemed to lull me into a false sense of confidence as it initially glided across the surface at the beginning of a fight, but as soon as it caught a glimpse of the boat, it shot for the bottom. After several minutes of back and forth, the cobia’s runs toward the bottom grew shorter and slower until the 50-incher was in the net.

Before that fish was even in the box, we had our next fish in sight and hooked up soon after. My father was on the rod for several minutes with this fish and worked it close to the boat before it took a hard run behind the outboard at the last moment and popped free. It was only a momentary heartbreak, though, because Captain Robbie spotted two big fish on the surface right off the bow. They seemed to have other things on their mind, however, as they swam back down to the depths and away from the live eels tossed in their faces.

After motoring back to where we had consistently seen fish, it wasn’t long before Dad’s friend, Joe, was hooked another large cobia. While Joe was tight to his fish, Captain Robbie spotted another off the starboard side and cast a bucktail right in front of it. After a few twitches of the rod, we had a double-header. Tyler then climbed down from the cobia tower, where he had spent a couple hours spotting fish with Robbie and Caleb, to fight his second fish.

After bringing in two more fish around the 50-inch mark, we put our second keeper on ice—filling our two-fish-per-vessel limit—and released the other. We released several others throughout the afternoon and made our way back to the dock. When Robbie filleted the fish, I saw evidence of his claim that cobia are bottom feeders: one fish’s stomach contents consisted of several large mantis shrimp and a half-dozen hogchokers (a small member of the flounder family).

The next day, we switched up our game plan and decided to wreck-fish the first half of the day before resuming the hunt for cobia when the sun was higher in the sky. We anchored over a wreck in 30 feet of water; over the next few hours, a variety of species came aboard. The most interesting were the tropical-looking spadefish that followed the bait to the surface and swarmed around it in massive schools visible just below the surface. In addition to spadefish, we caught sea bass, tautog, weakfish, triggerfish, and flounder, as well as a conger eel and a massive ray. Interestingly, one of the tautog had been tagged at that same spot two months earlier.

We pulled the anchor and headed up the bay, above the Bay Bridge-Tunnel, looking for cobia. For the first two hours, the fish seemed to be following the same playbook as the previous day. We would spot a fish on the surface and throw a live eel or bucktail in its direction, then watch it fade from sight below the surface.

As the wind began to pick up in the afternoon, we headed back toward the Bay Bridge-Tunnel for some shelter, and it was there that our persistence finally paid off. A 50-plus-inch cobia decided he was hungry for a live eel and the fight was on. As with the fish from the previous day, after a blistering initial run, this one slid across the surface until the boat came into view, then dug straight for the bottom. Before that fish was even caught, another one came into view, but as soon as the eel hit the water, we were on again. After boating the second fish, Tyler was just as excited to examine the stomach contents as he was to catch fish. With the afternoon breeze continuing to pick up, we worked our way back toward the dock without spotting any more fish.

With our cooler packed with fillets for the ride home to New Jersey and several new species checked off our lists, it was a trip to remember. I began the drive feeling quite relieved that I didn’t have a 24-hour trip ahead of me, and that I could listen to podcasts at a reasonable speed for the duration. 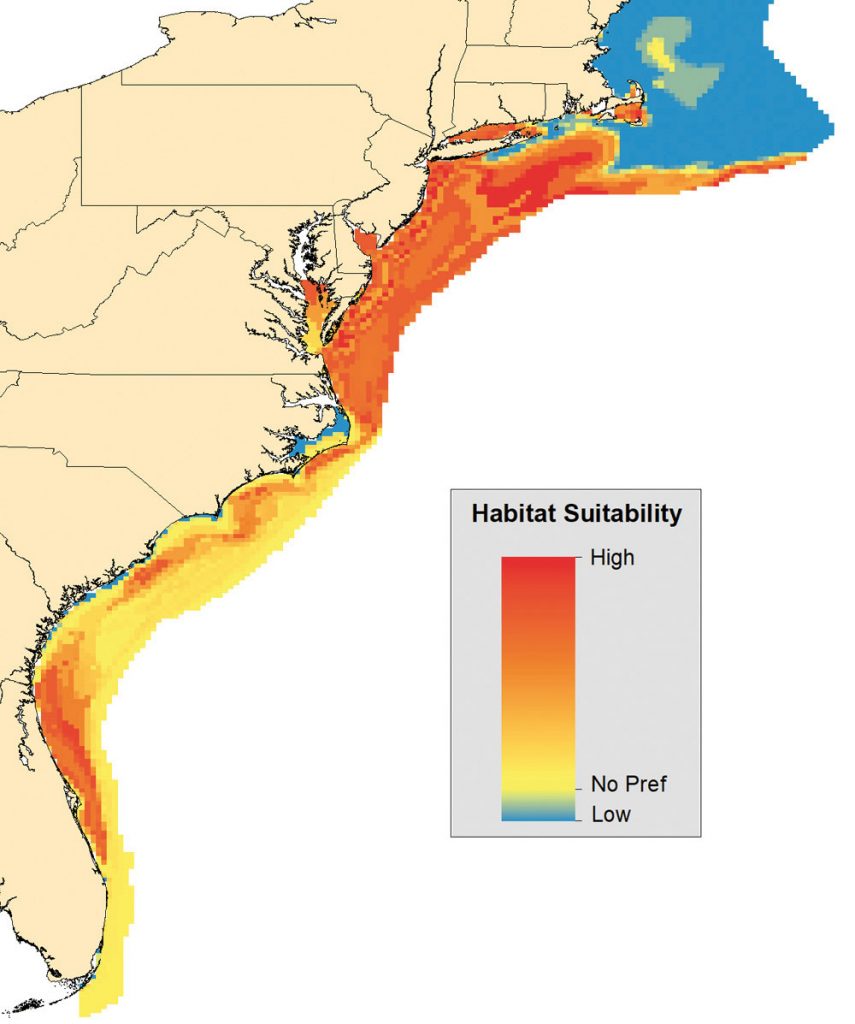 Southern species are becoming a regular occurrence in Northeast waters each summer and fall, and cobia are among them. East Coast cobia are historically found from Florida north to Chesapeake Bay, but recent research finds that they will likely become a reliable summer migrant to waters off the coast of New Jersey—and even as far north as southern New England—in coming decades. During the summer of 2022, anglers got a preview of this fishery when fishermen from western Long Island and northern New Jersey successfully targeted cobia while water temperatures were at their seasonal peak. These fish were reported as far north as Fall River, Massachusetts, where a striper angler fishing a chunk of menhaden off a bridge caught a 26-pounder in late June.

After a tagging study of 60 cobia from 2016 to 2018 to determine the species’ preferred habitat and conditions, researchers predicted that during the cold winter months, cobia are likely to maintain their current distribution from North Carolina south, but they expect to see a gradual northward creep in their typical summer range, with pockets of suitable habitat cropping up as far north as Cape Cod. About 40 years from now, their model predicts that waters off New Jersey’s coast will make up about 35 percent of the cobia’s suitable summer habitat. Connecticut and New York will comprise another 10 percent, meaning that nearly half of suitable habitat could be north of New Jersey during the summer. In the Northeast, the model predicted that cobia could be distributed from the shoreline to the Gulf Stream, meaning an encounter while tossing an eel from the beach, bouncing a fluke rig, or trolling a spreader bar for tuna are all possible.

The post Cobia Road Trip first appeared on On The Water.

The post Cobia Road Trip appeared first on On The Water.

Did you miss our previous article…
https://www.hardcoregamefishing.com/how-to-choose-a-braided-line/