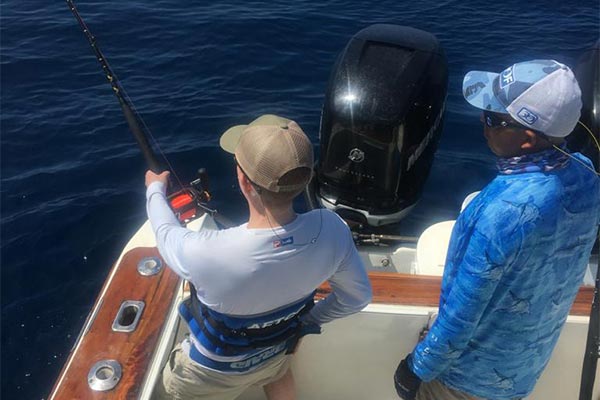 Still not convinced after 20 years of constant reports that San Cristobal Island Galapagos produces the most consistent large striped marlin bite in the world?

If you want lots of shots at striped marlin 120 to 300 pounds then there is only one safe and family friendly place to go and that is San Cristobal Island, Galapagos. The action continues with our latest report thanks to Vertigo 2 and On The Hook.

February 18, 2020: Vertigo 2 with our good friend Peter Santini and his group raised 23 striped marlin had 12 bites released 5 fishing Espaola Bank. On The Hook fishing the same are had a slower day with fish not cooperating.

They raised 4 and released 1/2 on pitch baits with Scott Hartleys group. Crews have been nothing that fish have been very finicky even though there are plenty of marlin feeding on the surface and lots of sardines. As our old friend Captain Allan Starr would say when its not your turn, its not your turn!.

Book your next fishing trip of a lifetime today with the outfitters that started it all back in the 90s. Ecuagringo is the first and longest running outfitter in the Galapagos.

The post Catch your marlin in the Galapagos Islands hot bite! appeared first on Ecuagringo.