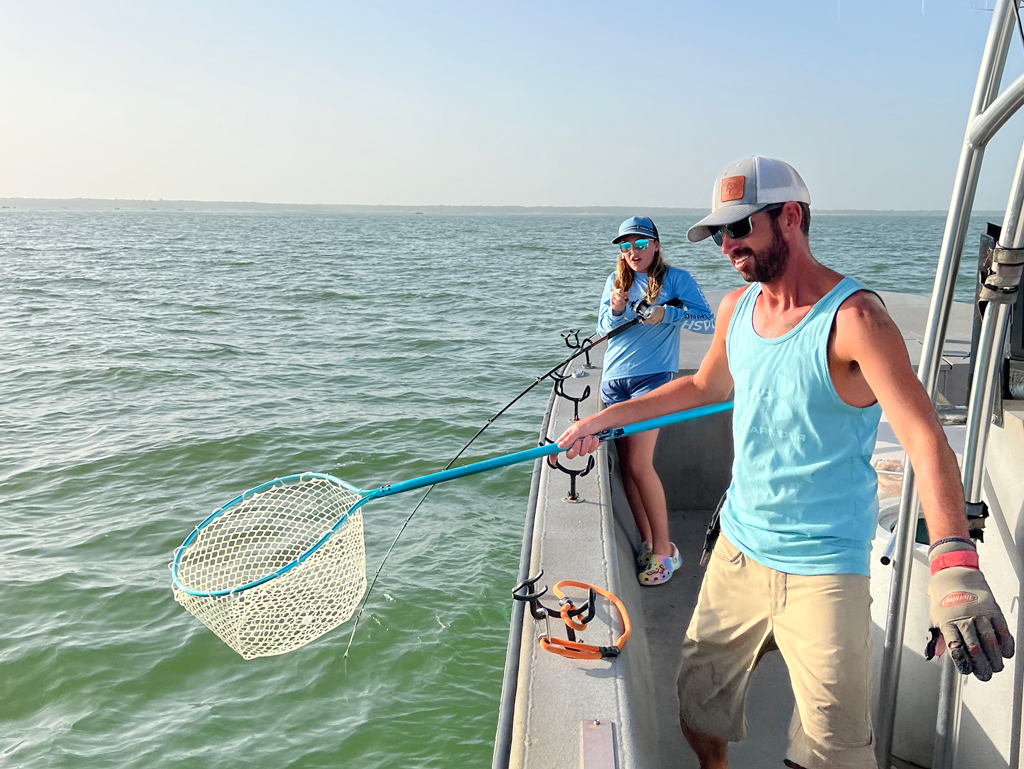 As 2022 draws to a close, it’s time to switch the focus back to where it belongs – you. No matter what life throws at you – from COVID to hurricanes and everything in between – you continue to go above and beyond to provide exceptional service to your customers.

What better way to close the door on 2022 than by shining a spotlight on some of the most impressive captain stories of the year? Overall, over 155,000 trips took place this year, so there were plenty to choose from. Let’s check them out…

Fishing, not catching, is worth five stars

We all know the famous saying that it’s called fishing, not catching. Chances are you’ve said it yourself when the action’s been slow! No matter how hard you work to put customers on fish, sometimes they just aren’t biting.

However, as Captain Seth Linton of Farrell Fish Co. shows, this doesn’t have to mean a bad trip or unsatisfied guests. When Zachary D from Kentucky stepped aboard in August, he knew exactly what to expect. “Captain Seth was very honest…he told us that fishing in the bay was [bad] at the moment,” he writes. “The water had gotten pretty rough, and [the captain] said the Gulf was likely worse.

Managing customer expectations and the reality of what is (or isn’t!) biting on the day of their trip can be tough. Capt. Seth’s honesty and communication skills meant that Zachary was fully prepared for the reality of his afternoon out on the water.

Other customers have also highlighted this in their reviews. Krystal T mentions that “the communication was excellent, he’s very responsive. He offered recommendations based on our needs and he had everything on board that we’d need.”

Ultimately, Zachary says it best. “No charter boat can guarantee you a catch, unless they are going to take you to catch a 3 inch bait fish!” What a good captain can guarantee is an unforgettable day, no matter what’s biting.

“Other than the fishing, being out on the boat was so peaceful and enjoyable,” writes Zachary. “Seth was great with the kids, baiting their hooks and casting for them, and giving them info on how to do these things for themselves. I would go back on his boat, for sure.” If a customer wants to come back on your boat without catching any fish the first time, you know you’re doing something right!

Setting expectations for guests who’ve been fishing before is one thing. But when you’re taking brand new anglers out on the water, it’s a whole other story! Christopher P was more than aware of this when he booked a trip with Keepin’ It Reel Striper Guide Service. He was accompanied by his two daughters, both new to the world of fishing.

“On the way to Lake Texoma, I warned my girls that this could be a long boring day for them but to try and stay positive and more importantly try not to get on each other’s nerves,” he writes.

Armed with snacks, headphones, soda, (and the all-important “beer for Dad”), Christopher and his girls set off on their trip. Captain Jacob swung the boat into the dock, they climbed aboard, “…and just like that [we] blasted out to the first fishing spot of the morning.”

Blasting out to the hotspots sounds exciting, right? Well, it was just a small sign of what was to come on the rest of this action-packed trip. As Christopher puts it: “Fishing usually takes time and patience…Not on this day. Stripers were there and hungry! They smashed our bait like they were having a hotdog eating contest.”

He wasn’t the only one who was impressed, either. His two daughters decided to have a “fish off” for a prize of their choice. “Captain Jacob was invested in the contest, so he took a chance by taking us to a new spot [where] he was confident the big ones would be.” This led to even more reel screaming, until the bait ran out and the two new anglers were exhausted! And Christopher’s prize? “[The] satisfaction [of] being a dad and watching my girls be so happy.”

Capt. Jacob isn’t the only captain who went the extra mile to help new anglers feel right at home. When Paige, Peter, and EJ headed out on a trip with Get Lost Charters, they quickly realized that “our experience of fishing is completely different than what you do in the river.” Originally from Connecticut, this family was used to a whole other way of casting a line – and Paige herself was a complete beginner.

However, this didn’t slow them down. “Captain Tim has [the] patience of a saint!” writes Paige. “He encouraged and guided me to where the best places were and how to reel and actually get the fish to the boat.”

As fish after fish hit their lines, time started flying by – but Capt. Tim was more than happy to keep the action going. “‘Technically our charter should have wrapped up,” says Paige. “I’d like to apologize to Tim’s wife because he continued with us a lot longer than 1/2 day!”

As well as his willingness to be flexible, the family also highlighted Capt. Tim’s fishing knowledge, patience with beginners, and happiness to teach all the tricks of the trade. “He does it in such an easy way that encourages and motivates you to keep trying for the Big One.

We couldn’t have had a better day. [Capt. Tim] has a passion for fishing; but more importantly, [he] enjoys sharing his stories with all levels of fishermen and going that extra mile.” All of these factors combined lead to one thing – seriously happy customers!

For our final story of 2022, we’re heading over to Cabo San Lucas in Mexico. When John V planned a trip aboard Ursula Fishing with his family, he had two things on his mind: Marlin, and time. “I had told [the crew] that Marlln was on the top [of] my bucket list but that I was running out of time,” he explains in his review. “I am 83 years old and I am experiencing Parkinson’s disease.”

Their response? “Don’t worry, we’ll take care of you.” This turned out to be true from the moment this family stepped on the boat. “The kids enjoyed the ride tremendously and the crew made all of us satisfied and pleased,” John mentions. This was followed by some angling action that led to around 10 Mahi Mahi and a few Bonito being hauled onto the boat.

“Needless to say, we had a very tasty dinner that evening”, John says. But what about his elusive Marlin? Although the captain had mentioned a strong chance of hooking this Billfish at the dock, John felt like he was running out of time.

The deckhand switched up the fishing gear with some special Marlin lures, and the crew started trolling along the coast. An hour went by, and still no Marlin. By this point, John was beginning to wonder if his bucket list fish would ever get ticked off. Then came the sound they’d all been waiting to hear – some reel screaming and a cry of “Big fish! Big fish!” from the captain.

Knowing how important it was for John to experience this fishing action first hand, the deckhand pushed him into the captain’s chair. He saw the Marlin as it “thrashed its way across the horizon.” John began reeling in the fish, then passed the rod over to his son-in-law to finish off the job – an agreement they’d made before the trip!

Then the unexpected happened: Another fish bit. “This may have been the strongest Marlin that we had hooked!” says John. Reviewer Dayna had a similar experience: “Such a crazy fight to catch a 150 pound Marlin. My husband was fighting it for 2.5 hours!”

After an unforgettable half-hour battle with the fish, John and his family posed for pictures with their catch. How did John feel? “Oh, what a day, oh happy day, what a day to fish for Marlin,” just about sums it up. With the determination and help of a crew willing to go the extra mile, he can well and truly tick that Marlin off the top of his bucket list. What a way to end 2022!

Captains who ran the most trips in 2022

But that’s not all. Some of you guys made a big impression with sheer numbers alone. Let’s take a moment to congratulate the captains who not only received the most bookings, but made sure they honored them and took customers on some unforgettable days out…

As you can see, this past year has been packed full of success stories. As 2023 approaches, check out how you can keep building your fishing reputation and run trips that customers will remember for years to come. Here’s to the new year and even more success stories!

Did you miss our previous article…
https://www.hardcoregamefishing.com/the-biggest-questions-you-have-about-2022/