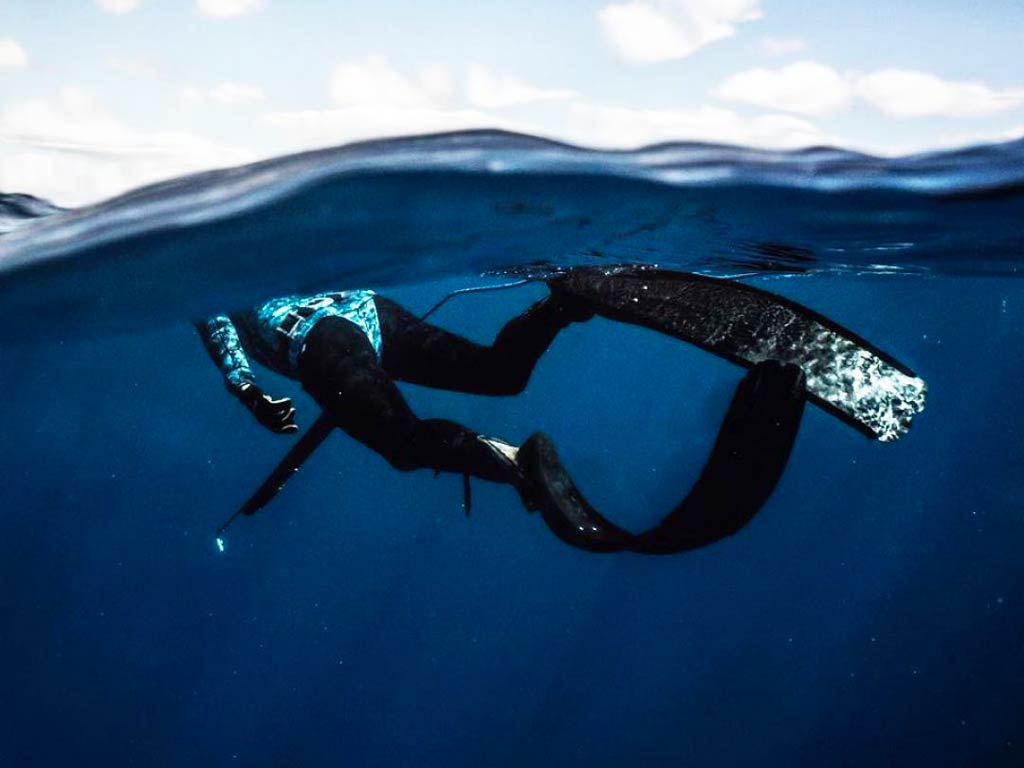 Innovative and entertaining, California is constantly in the spotlight. It’s easy to lavish superlatives on it, and fishing is no exception. With over 800 miles of coastline, the “Golden State” is on every angler’s map. Fishing is undoubtedly superb but spearfishing in California is something else. It gives a new meaning to “golden” in California’s nickname.

There’s nothing more spellbinding than getting up close and personal with your prey. And spearfishing gives you exactly that. While not exclusively reserved for California, this way of fishing is often associated with this state due to its popularity. We’ll pass our excitement on to you by covering top catches, regulations, and fishing spots. Let’s dive into California’s spearfishing world together.

No spearfishing location is the same. So knowing your future spearfishing destination is always a good idea. It will help you prepare for the upcoming trip and curb unpleasant surprises. And we’re here to help you with that.

Here’s a quick rundown on what to expect from spearfishing in California:

What can I catch when spearfishing in California?

Variety is California’s strong suit, so you already know the answer to this question – a plethora of species. You can catch anything from Panfish to trophy fish. Spearfishing in California is a year-round activity, so the chances of ending up empty-handed are almost non-existent. However, not all creatures will be abundant throughout the entire year. Let’s see what you can expect from the headliners.

For a picture-perfect catch with a pinch of local flavor, go for Yellowtail Amberjack. Gorgeous-looking, hard-hitting, and strong-pulling, Yellowtails are there to lock you in a duel for a championship title. Native to Southern California, these majestic fighters will not only spice up your spearfishing experience but your palate as well, should you come out victorious.

Feisty and tasty, you can’t go wrong with Yellowtail. Treat them with anchovies, and they’ll put up a show for you in an instant. Chumming amplifies your hunt by keeping them closer to the surface. If you’re looking for a serious jackpot, you’ll want to hit hotspots with a dense population like Catalina Island and San Diego. And when isn’t a problem because they’ll be around any time you visit California!

Another SoCal favorite is Calico Bass. Kelp Bass – or Bull Bass or Toads, depending on their size – as they’re known locally, are among the most sought-after fish species in Southern California. Though, Bulls and Toads won’t be as widespread as regular-sized Calico. These two refer to impressively large Calico specimens you can encounter in the deeper waters.

Speaking of their whereabouts, Kelp Bass prefer kelp beds, thus the name. But truth be told, they love all kinds of habitats from the open waters to rocky reefs. Pair this up with the fact that they’re omnivorous eaters, and you’ll have no trouble finding them. An added bonus is their year-round availability. So ready, steady, go!

Unlike their SoCal neighbors, Pacific Halibut feel at home in the colder waters of Northern California. These mighty leviathans are among the world’s prestigious catches. Their slightly smaller relatives – California Halibut are also common spearfishing targets. Together, they’re the embodiment of a spearfishing challenge. And here’s why.

Halibut are bottom dwellers who’ve mastered the art of camouflage. So, spotting them will be your obstacle number one. Once you’ve located them, a stealth approach will be of the utmost importance. Provided you nailed detecting and containing your excitement without spooking the Halibut, congratulations, you’ve reached the final stage – the shooting!

But hold your horses! Always make sure they’re of legal size prior to piercing them. You’ll have about a couple of seconds to check them out before they notice you and bolt away. To make your pursuit more difficult, they’ll be up for grabs only between May and November. Elusive and cunning, Halibut are your go-to fish!

You didn’t think we’d end California’s spearfishing line-up without mentioning the lead performers, did you? Good, because we saved the best for last. California’s spearfishing scene blesses you with not one, but two highly wanted Tuna species – Yellowfin and Bluefin! These muscular and bony giants are the fast-swimming and hard-striking opponents you’ve been waiting for.

Aggressive and acrobatic, Tuna will make you up your spearfishing game. You can try your luck at landing them during the hottest season of the year. But even then, you’ll need sturdier gear, durable diving equipment, and nerves of steel for your offshore quest. Second to none, Yellowfin and Bluefin Tuna are your true spearfishing rivals!

Of course, there’s more! The list of California’s spearfishing targets doesn’t end with the above-mentioned celebrities. It expands to include saltwater sweethearts like White Seabass, Mahi Mahi, Barracuda, Seabass, and Lingcod. They’ve all established themselves as notable spearfishing candidates and catches worth going after.

The deep blue residents are inspiring, but let’s not forget about California’s freshwater scene. You can spearfish in the Colorado River District for Mullet, Carp, and Tilapia year-round. The Valley District and Black Butte Lake offer seasonal Mullet, Carp, Tilapia, Striped Bass, and Western Sucker opportunities. All in all, spearfishing in California will have you spoilt for choice.

Are there any species I can’t target while spearfishing?

There are more species that you can target than those you can’t. However, some creatures are protected and harvesting is prohibited. You should take care of their population and respect the latest regulations surrounding their hunt. Billfish, for example, shouldn’t be on your list when spearfishing in California. The same goes for Giant Sea Bass and White Shark.

Be mindful around Crustaceans as they can only be taken by hand. You’re also responsible for preserving Cowcod and avoiding spearfishing near the Cowcod Conservation Areas. Note that you can’t spearfish in parts of the Colorado River where there are Salmon, either.

While you may go after Sharks, due to safety reasons we recommend focusing on some other less dangerous species. Please visit the California Department of Fish and Wildlife for more information.

Where can I spearfish in California?

Showered with superb spearfishing corners, California is truly a spearo’s paradise. Naturally, choosing one location over another is impossible. We’ll mention several spots scattered along the coast and leave it up to you to choose your next spearfishing destination. Below is our list of spearfishing spots in California you should check out.

When we said that SoCal had a more impressive spearfishing scene, we weren’t kidding. Catalina Island and San Diego are only two out of many top-notch spearfishing spots in Southern California. San Clemente, Santa Monica, Dana Point, and Los Angeles are not to be missed either. Whichever place you choose, it won’t disappoint you!

Anything else I should know?

Apart from fish species and their hideouts, there are a couple of things you should know about spearfishing in California before heading out. Here’s a quick breakdown of what to pay attention to:

Spearfishing in California: A Golden Experience

Adrenaline seekers, you know what to do – pack your stuff and hit the road! The Golden State is waiting for you. Be it your first or hundredth time, spearfishing in California won’t fail to pump you up. Having the time of your life is guaranteed with Yellowtail, Bass, Halibut, and Tuna. After some hard work, you deserve some fun, don’t you?

Did we answer all your questions? Have you ever been spearfishing in California? What did you catch? Tell us all about it in the comments below!

The post Spearfishing in California: A Beginner’s Guide appeared first on FishingBooker Blog.