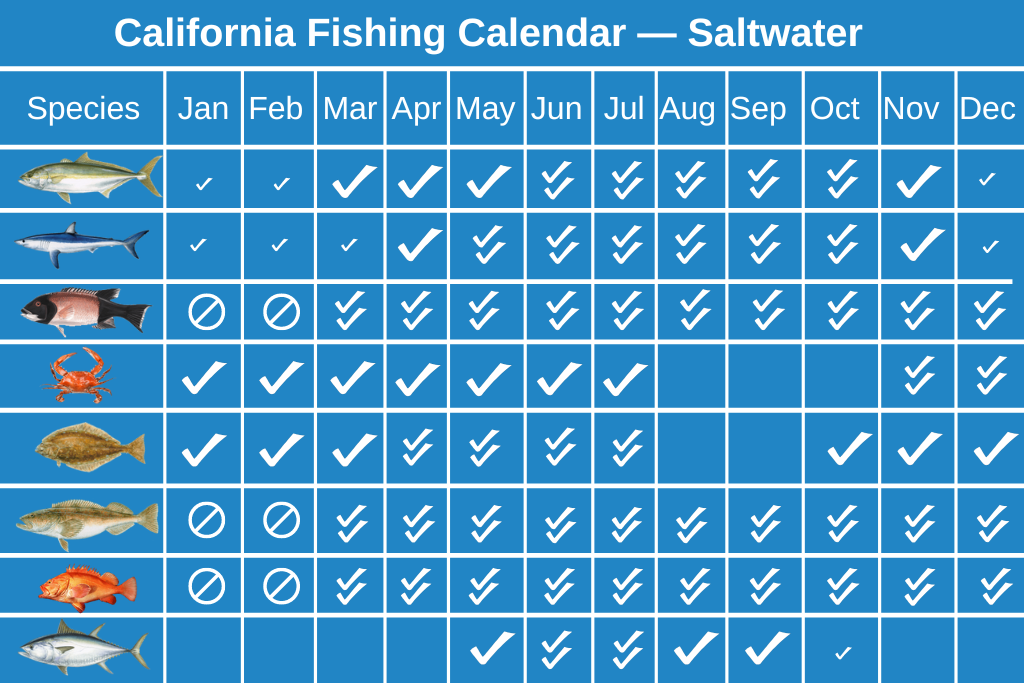 The “Golden State’s” perfect weather, Hollywood, incredible coastline beaches, and iconic national parks need no introduction. But what does California have to offer for anglers? A healthy dose of fantastic catches all year round, of course! Each California fishing season greets anglers with incredible opportunities, no matter their age or skill level.

California is blessed with over 800 miles of coastline, along with beautiful and diverse lakes, rivers, and reservoirs. Any angler can go fly fishing in the Sacramento River and then explore the prolific deep sea waters off the San Diego coast. There’s the mighty Pacific with Tuna, Marlin, and Halibut, Lake Tahoe with Salmon and Trout, and other lakes and streams with Bass and Kokanee.

Month by month, this guide describes the best of California fishing season. It covers the most interesting spots to wet your line, as well as the top catches throughout the year. So without further ado, let’s talk about what you can expect.

What to expect from California’s fishing seasons?

For instance, the best time to fish for Salmon and Trout on Lake Tahoe is in early spring and late summer. The high season in San Diego begins in April and lasts until October when Tuna and Marlin migrate through the area. However, it doesn’t mean that there’s nothing else biting outside of the peak months!

Every month brings something exciting and different to anglers in California. Here’s a breakdown of the California fishing season:

If you’ve decided where you want to go for your next fishing trip, don’t forget to check the local regulations for freshwater and saltwater fishing. As well as that, you’ll need to purchase a valid California fishing license. Now you know that, let’s dive in.

The winter fishing season in California is as great as it is in the summer – it’s as simple as that. While some anglers pack away their rods until next spring, winter anglers rub their hands in excitement.

So, what is fishing in California in January like? Your first stop could be hunting for Sturgeon in San Pablo Bay. This place has long been known as a “Mecca for winter Sturgeon” by locals, and for good reason. There’s even a spot called the “Sturgeon triangle” where anglers drift Shrimp on the moving tide.

If you’re more of a Steelhead type of angler, you can head to the Klamath River to catch their peak winter run. Alternatively, they’re also cooking in Lake Berryessa and the Smith River, as well as the Tuolumne and Merced Rivers. California’s Central Valley usually opens the Steelhead season in early January, and Crappie lovers can search for their favorite species in Lake Havasu. Make sure to check the weather forecast in advance, though, since it can greatly influence your success when catching a line.

Don’t think that we’ve forgotten about saltwater anglers, though! Bottom fishing for Halibut and Flounder can be your first stop in January. Or, you can move on to look for Calico Bass along Southern California‘s coast.

As we move to the final month of the winter season, there are even more exciting fish species on the menu. Halibut arrive in sheltered bays all the way from Eureka to San Diego. Some of the hotspots to look for these bottom feeders include:

Of course, Halibut aren’t the only stars of the February fishing scene. Calico and White Seabass are also active in February, along with good Crabbing opportunities in Bodega Bay.

On the freshwater front, the Sturgeon action is good in the Delta, while Chinook “King” Salmon bite well in the Smith River. You can go for a trolling trip in Lake Tahoe for Mackinaw Trout, or head to the upper Sac River to fly fish for Steelhead.

To top things off, landlocked Striped Bass and Catfish can be found in the Los Vaqueros Reservoir in northern California.

March marks the beginning of the California spring fishing season. If you don’t know where to go first, various lakes throughout the state offer good Bass and Trout fishing.

Largemouth Bass bite well in Collins Lake, which is based in the foothills of Yuba County. If you’re more of a Smallmouth Bass type of angler, consider paying a visit to the Diamond Valley Reservoir. Some fishermen manage to land Smallies up to 15 pounds in this 4,500-acre lake!

As for the Rainbow Trout options, the Sacramento River’s tailwater segment can be pretty productive this time of year. To add to the Trout mix, you can head to Lake Almanor‘s tributaries for Brown Trout.

Saltwater-wise, March can also be pretty productive. Lobstering is great in Southern California, while north coast anglers fish for Halibut and Crab. If that’s not enough, look for White Seabass, Sculpin, Calico Bass, and Sheephead, too.

Come April, saltwater fishing really begins to pick up momentum. First of all, Barracuda and Yellowtail start to appear near Catalina Island. Secondly, the season for Lingcod and Rockfish opens.

As schools of anchovies arrive in San Francisco Bay, they’re followed by hungry Striped Bass. You might want to plan your trip around this fishing frenzy and check out spots such as the Vallejo Wall, Candlestick Point, Fort Point, and Sausalito Jetty.

April is a good time to explore your freshwater options, too. Here’s our pick of California lakes to check out in April:

As we move into May, we can officially say that California’s big game season is open. Tuna anglers polish their rods to fish off the coast of San Diego. And the menu is impressive this time of year with Albacore, Bigeye, Yellowfin, and even Bluefin up for grabs. Our advice is to target the vicinity of Catalina Island.

Saltwater options aren’t limited to just Tuna, though. Mackerel, Barracuda, Sheephead, and Calico Bass are all available pretty close to shore, too.

If you’re looking to see what’s biting inland, you’ll be pleased to know that the San Fransico Chinook Salmon season opens in May. Along with that, you can explore various other Salmon destinations. Lake Berryessa also offers good Kokanee populations, for example.

Anglers in downtown Sacramento can target runs of Shad in the American River, while Trout lovers can enjoy a fishing trip to Collins Lake. Catfish enthusiasts can hit the waters of Folsom Lake in search of a big catch, while Rainbow Trout lovers might want to check out the Upper Hat Creek.

The first month of summer brings along an absolute big game star — Marlin. Striped and Blue are both available in deep waters. Tuna and Yellowtail are also around, along with Mahi Mahi, impressing both local and visiting anglers. The Coronado Islands and San Clemente are among the hottest spots in June.

If the weather cooperates and conditions are good, consider booking an overnight charter for a saltwater mixed bag. Rockcod, Calico Bass, Sand Bass, Halibut, Yellowtail, Bluefin Tuna, Marlin, Bonito, and Barracuda are all among the potential catches in June.

While deep sea fishing off the coast of San Diego, San Francisco, and many other cities is picking up, freshwater opportunities don’t disappoint either. Clear Lake produces good numbers of Largemouth Bass, Catfish bite in Lake Henshaw, and Lake Nacimiento is a good spot for some White Bass action.

It goes without saying that some of the best fishing in California is in July. White Seabass is actively biting in the offshore waters of San Diego and Dana Point. If the conditions allow, you can still target the majority of the big game superstars, adding Albacore and Wahoo to the list.

Salmon fishing is also hot in July. Lake Tahoe anglers are busy fishing for Kokanee, while others prepare for the fall Salmon run on the Sac River. To add a bit of diversity to the freshwater fishing menu, you can target Yellow Perch along drop-offs and deep waters of Crowley Lake.

Mid to late summer offers excellent chances of catching a large variety of species. A full-day or an overnight trip may result in many great catches, including Striped Marlin, Yellowtail, Wahoo, Halibut, Mahi Mahi, Calico Bass, Sand Bass, Barracuda, and many more.

Further proof that August is the hottest month of California fishing season is that you can catch four types of Tuna. Bluefin, Albacore, Yellowfin, and Bigeye all bite well in August.

In August, various California lakes and rivers are crowded with anglers of all ages. They come to the Sac River and Bodega Bay hoping to land King Salmon. Some locals also fish Whistle Buoy, Tomales Point, and Salmon Creek.

Fly fishermen go for Golden Trout in John Muir Wilderness, while others fish for Smallmouth Bass in the Russian River.

Believe it or not, California fishing season doesn’t end when September comes. Tuna are still among the main attractions offshore, along with Bonito, Mahi Mahi, Calico Bass, and Yellowtail.

Bluefin Tuna and Marlin are leaving, although you can still try your luck offshore. In fact, you can find them closer to shore in San Diego if the weather is warm enough. Striped Marlin are also on their way to warmer waters, so you might not want to miss your chance to say goodbye.

You can pack your light tackle and head to bays and estuaries to fish for Leopard Shark or troll for Albacore Tuna in Shelter Cove. Mako, Thresher, and Blue Sharks are also available.

If you’re interested in Salmon, consider a Kokanee fishing trip to Don Pedro Reservoir. Some locals say it holds the state’s largest Kokanees!

If the weather allows and you feel adventurous, you can still enjoy some offshore fishing action. There might be some Yellowfin Tuna available for those who know where to look, along with Halibut, and Bonito. Rockfish are on fire in San Diego, especially Rock Cod, Corbina, and Calico Bass.

November is a good time to take it easy and enjoy some bottom fishing action for Groundfish in San Diego. Lingcod and Halibut, along with Albacore, Sharks, and Rockfish are among the popular November catches in California.

If you’re not ready to give up on deep sea fishing just yet, consider an overnight trip to Mexican waters. Don’t forget to pack your passport, though!

Salmon season is closed in the bay, although you can still look for them in the Sacramento River. Many anglers in the San Francisco Bay Area switch their attention to fishing the Delta for Striped Bass and Sturgeon. Stripers are also active in the Sacramento Delta.

Your other options include some early winter Steelhead fishing in the Klamath River. As well as that, you can begin your winter season with a Spotted Bass trip to Lake Oroville.

By the end of the year, most saltwater anglers divide into two categories. The first category includes adventure-seekers who book trips south all the way to Coronado Islands. Why? Because even in December, you can find Mahi Mahi, Bluefin, and Yellowfin Tuna if you travel far enough.

The second category switches their attention to Lobster and Dungeness Crab, which happen to peak in December. If all else fails, Halibut are still around, along with Rockfish before the seasonal closure in January.

California Fishing Seasons – A Fishing Buffet All Year Round

So, there you have it, a breakdown of California‘s fishing seasons. As you can see from everything we mentioned above, there’s never a bad time to come fishing in California. There are so many spots and fish species to explore in California, that this guide could easily have a couple more sections!

Now it’s over to you. Have you ever been fishing in California? What’s your favorite fishing time of the year? Let us know in the comments below!

The post California Fishing Season – All You Need to Know appeared first on FishingBooker Blog.

Did you miss our previous article…
https://www.hardcoregamefishing.com/accessing-your-booking-information-is-now-easier-than-ever/