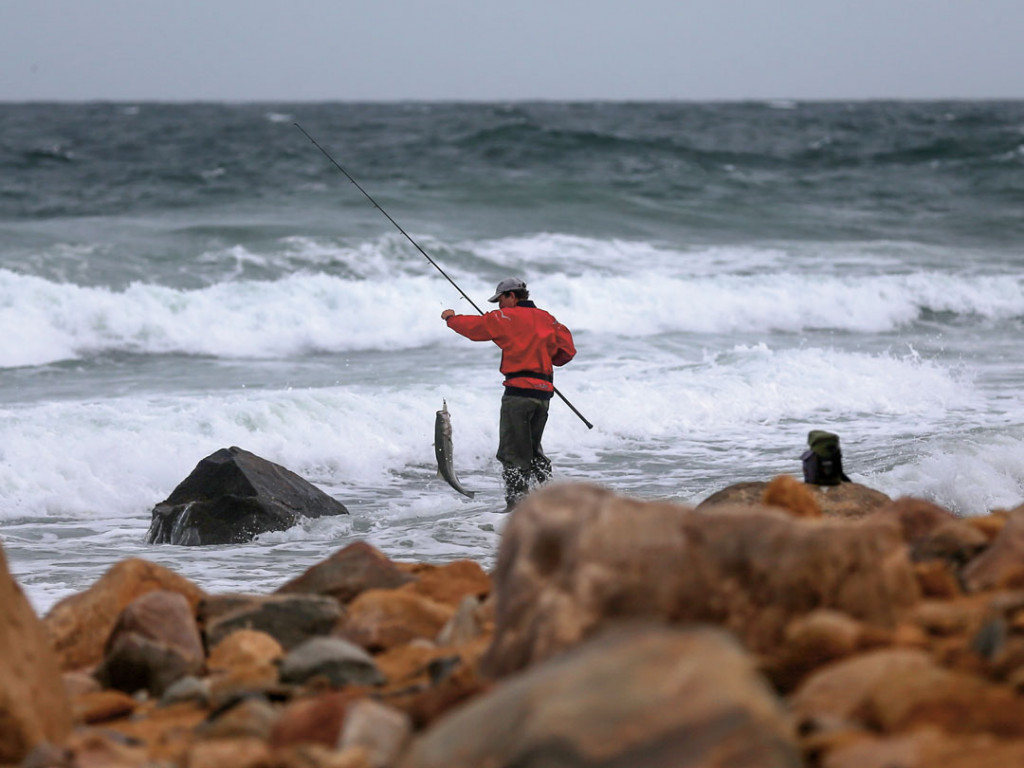 A little over five years ago, I walked into tackle shops and bought bucktail jigs, expecting to tie one on and magically catch fluke and striped bass. I ventured to open beaches, jetties, boulder fields in search of stripers, with minimal success. I managed to find bluefish or, rather, they managed to find me, but too often, jig-stealing rocky structure sent me right back to those same tackle shops to re-up on bucktails. This repetitious and unforgiving experience is exactly what deters many anglers from using bucktails. I always had them with me, but at the time, my understanding of the many jig styles, features, and methods to successfully fish these lures for striped bass was limited; that is, until I listened to renowned surf and boat bucktail fisherman, John Skinner.

After reading his book Fishing the Bucktail, I spoke to John for one of On The Water’s “Striper Season Update” videos about targeting striped bass with bucktail jigs. John fishes with bucktails because there are very few other lures as versatile and multi-faceted. When fished properly, a bucktail can be used in almost any environment, in any conditions. Depending on factors such as current, wind, structure, and depth, each jig style and weight has a specific time and place to be used effectively. As a surfcaster, understanding the applications of different bucktail styles, features, and weights before fishing them around rocks will simplify the learning experience, leading to more productive fishing trips and fewer trips to the tackle shop.

Rocky shorelines and boulder fields are full of snags—snags that are often home to hungry striped bass. As opportunistic predators, stripers use the cover of big rocks and associated current breaks to ambush any prey that gets trapped among the hard structure. Small scup, black sea bass, sea robins, crabs, lobsters, and baitfish like peanut bunker or silversides are known to dwell in these environments, all of which can be imitated with the right size and color bucktail jig.

The first step to selecting the proper bucktail weight and color is to scout a spot before you fish it, preferably at low tide. Observe the surroundings and make mental notes about the environment; remember the locations of the big boulders, deep pockets, and sandy patches to avoid losing jigs and better locate potential feeding zones during higher tides.

Boulder fields, generally speaking, are relatively shallow areas and the scattered rocks inhibit current, so unless there’s a lot of sweep, a bucktail weighted between ¾ and 1 ounce will often get the job done. Over deeper water or in stronger current, bucktails of 1½ to 2½ ounces may be necessary.

After studying the environment, observe the water for bait and take note of the forage in the area to make an informed decision on your bucktail color. White, pink, and wine-colored jigs usually cover all my bases. Additionally, I carry red, white, and pink jig strips to tip the bucktails. With a few different bucktail styles in each of the aforementioned colors, I feel confident about being able to match the shade, size, and profile of the many options stripers have for snacking.

The key feature of a bucktail jig is the deer hair. The hair in a deer’s winter coat is hollow, which helps trap air and keep it warm during the cold months. On a jig, this hollow hair adds buoyancy, slowing the sink rate. As a result, a jig tied with more deer hair sinks more slowly.

The deer hair undulates naturally underwater, pulsing and “breathing” as the jig swims, hops, and drags along the bottom. This allows it to mimic prey from crabs and shrimp to a massive variety of baitfish.

For example, a sparsely-tied, ¾-ounce white bucktail might look like a lone sand eel, while a fuller-bodied pink bucktail jig of the same weight may resemble a small squid or a juvenile scup.

There are several styles of jigheads used on bucktails, but the most common are the “Smiling Bill,” the bullet head, and ballhead. Each of these styles work in a boulder field, provided the weight and bucktail density is matched to the depth and current speed. With an upward-facing line tie, all of these styles can be fished above shallow structure by holding the rod high.

Another characteristic that varies with each jig style is the hook shank. On a bucktail jig, the shank is the space between the jighead and the bend in the hook. A longer shank means the fish can gain more leverage and may be more likely to throw the hook, or if the fish is large enough, bend the hook out. However, with a short shank, there is the risk of the hook not fully piercing the lip of a larger fish. I like bucktails with a medium shank that’s long enough to get a secure hookset, but not so long as to give the fish extraleverage.

Some bucktails are made with a swing hook, which, in addition to giving the trailer extra action, makes it less likely for a fish to throw it during the fight. Using a swing hook can be extremely helpful in boulder fields because the shallow water and abundant structure leaves the fish less room to run, which means it can more easily surface and shake its head to free itself.

Jig trailers give even more lifelike action to bucktail jigs and, sometimes, the additional action they provide is what triggers a strike. A variety of artificial and natural baits can be used as jig trailers. Some are long and thin with considerable action, and some are thick and stout with tons of color. One constant among trailers is that they add length and bulk to a bucktail, provide extra movement, and impact the sink rate of a jig. Some even provide extra scent.

A number of custom-tied bucktails have hackle feathers attached to the bend of the hook that function as a trailer. The feathers also make the jig look more filled-in by giving the illusion of perceived density without adding any additional weight or impacting the sink rate. Jigs lacking hackle feathers can be spruced up with removable trailers.

Some of the best artificial jig trailers are not always marketed as such, like Berkley Gulp. It is one of my favorite additions to a bucktail, but until my conversation with John Skinner, I overlooked the impact it had on my jig’s sink rate. Gulp floats, so pairing it with a fuller-bodied bucktail drastically increases the jig’s buoyancy. The floating ability of Gulp makes it a great trailer for fishing shallow water in boulder fields because it assists the jig in gliding over rocks by keeping it higher in the water column. The Grub and Swimming Mullet styles are an all-around favorite because of their kicking tails and the wide variety of bright colors they are available in.

Other trailers are designed specifically to be used with bucktails jigs. Some, like Fat Cow Jig Strips and Captain Bruce’s Otter Tails, come doused with a fish-attracting scent in a small resealable container that can be easily stored in my plug bag or on my surf belt.

After two seasons of unsuccessful trial and error, I gathered my thoughts and collected all the jigs I had accumulated. I was going to put what I’d learned from the page and the computer to the test. So, frustrated but determined, I headed out to the North Fork of Long Island in search of a mid-fall striper bite.

That night, I crashed at my aunt’s summer home just outside of Greenport. The cozy, single-story beach house nestled in the woods has always been an escape for me from the malaise of suburbia—and it just so happened to be a short drive from some of my favorite, rocky surfcasting spots. I’d had success at these locations with topwater plugs and floating swimming plugs, but this would be my first attempt at fishing them with a bucktail.

As I buckled my waders in the parking lot of spot number one, I thought about everything I had read in Skinner’s book and the mistakes I had made during previous attempts. Too many times, I had gone too heavy for the waters I was fishing or had chosen a jig with too little deer hair that caused it to sink and snag. This time, though, I took Skinner’s advice. I tied on a 75-pound Tactical Anglers Power Clip and slid on a ¾-ounce white Sea Striker Tidewater Popeye bucktail with a long, white, curly strip of Captain Bruce’s Otter Tail.

It was high tide, but I walked westbound down the beach and waded out to a partially submerged rock that would allow me to cast to larger, fully submerged boulders. The wind was blowing directly out of the northeast, and this typically tranquil cove on the Long Island Sound was roaring with whitecaps that crashed abruptly into the pebbly shore. The current was moving east, so I cast toward the left side of the biggest boulder, which I’d located during an earlier, low-tide exploration. Almost immediately, I was hooked up to a striper. It was just a schoolie, but this was a major victory for me. I took another cast to almost the same exact spot, and within seconds of retrieving, I gave my rod a small twitch, and another fish took the jig. Then another, and another. I felt like I had cracked a secret code. At that moment, I realized what I had just done right, and what I had been doing wrong all along.

This time around, I fished my bucktail with confidence—something I had not done during previous outings. Like an equation, the tide, wind, depth and structure were all contributing factors that informed my decision about which bucktail in my bag was best to throw. To fish with confidence is not to second-guess your own decision-making. For a split-second, I had the thought, “There’s no way this ¾-ounce bucktail is heavy enough for me to cast straight into this headwind,” but it reached the spot I needed it to, and it sank just enough to hit the strike zone without the worry of losing it in the rocks.

The post Bucktails In Boulder Fields for Big Striped Bass appeared first on On The Water.

Did you miss our previous article…
https://www.hardcoregamefishing.com/striperfest-2022-wrap-up/