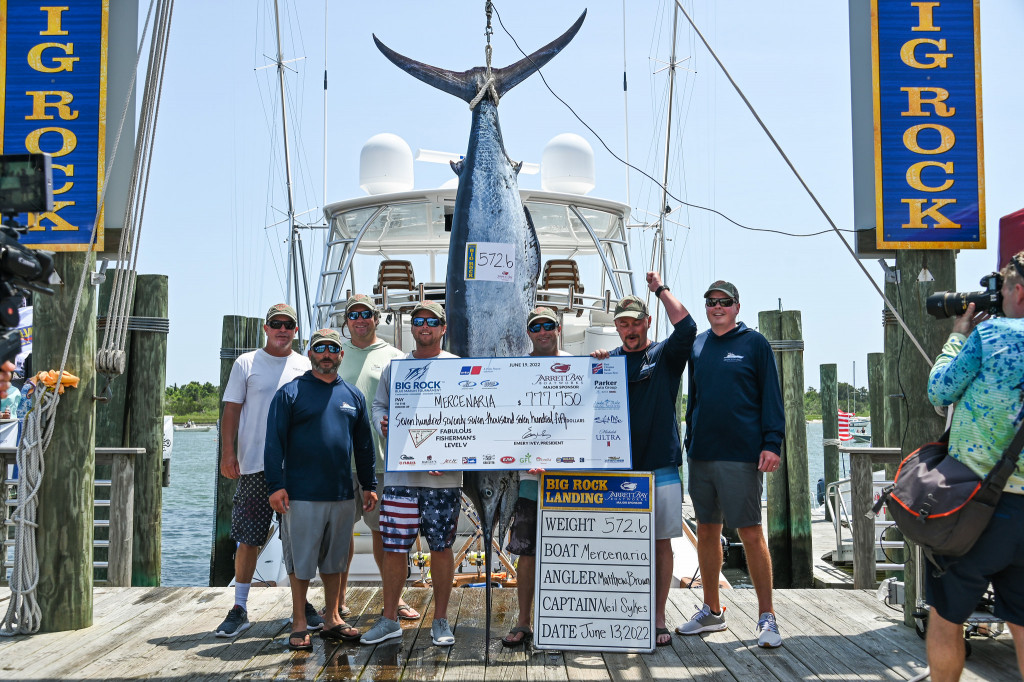 Morehead City, NC (July 7, 2022) – Along North Carolina’s Crystal Coast, the Big Rock Blue Marlin Tournament recently celebrated 64 years of action-packed offshore competition with a record-breaking purse and top prize payout. This year, 266 teams and over 1,500 competitors vied for a piece of the impressive $5,858,875 purse, and the winning team was able to stack up a total payout of $3,489,813 – a record only surpassed by one other event in all of billfishing’s tournament history.

Day 1 of the tournament started off hot, with Captain Neil Sykes of the 72-foot Viking, “MERCENARIA” and angler Matthew Brown weighing a 572.6-pound blue marlin. Their entry into the Fabulous Fisherman division of the tournament immediately ensured them at least $777,750 for bringing the first blue marlin to the scales weighing over 500-pounds.

Teams fish four of the six days (captain’s choice) of the tournament and can enter in as many of the eleven eligible divisions as they prefer, each with unique payout opportunities. Although seven additional blue marlin were brought to the scales at Big Rock Landing throughout the 6-day tournament, none could unseat the 572.6-pound fish weighed by “MERCENARIA” on the first day. The team’s first place blue marlin along with their Fabulous Fisherman prize added up to winnings of $3,489,813. Other popular billfish tournaments have had larger participant fields and total purses available, but only once has a single participating team won a calcutta of prizes this large. 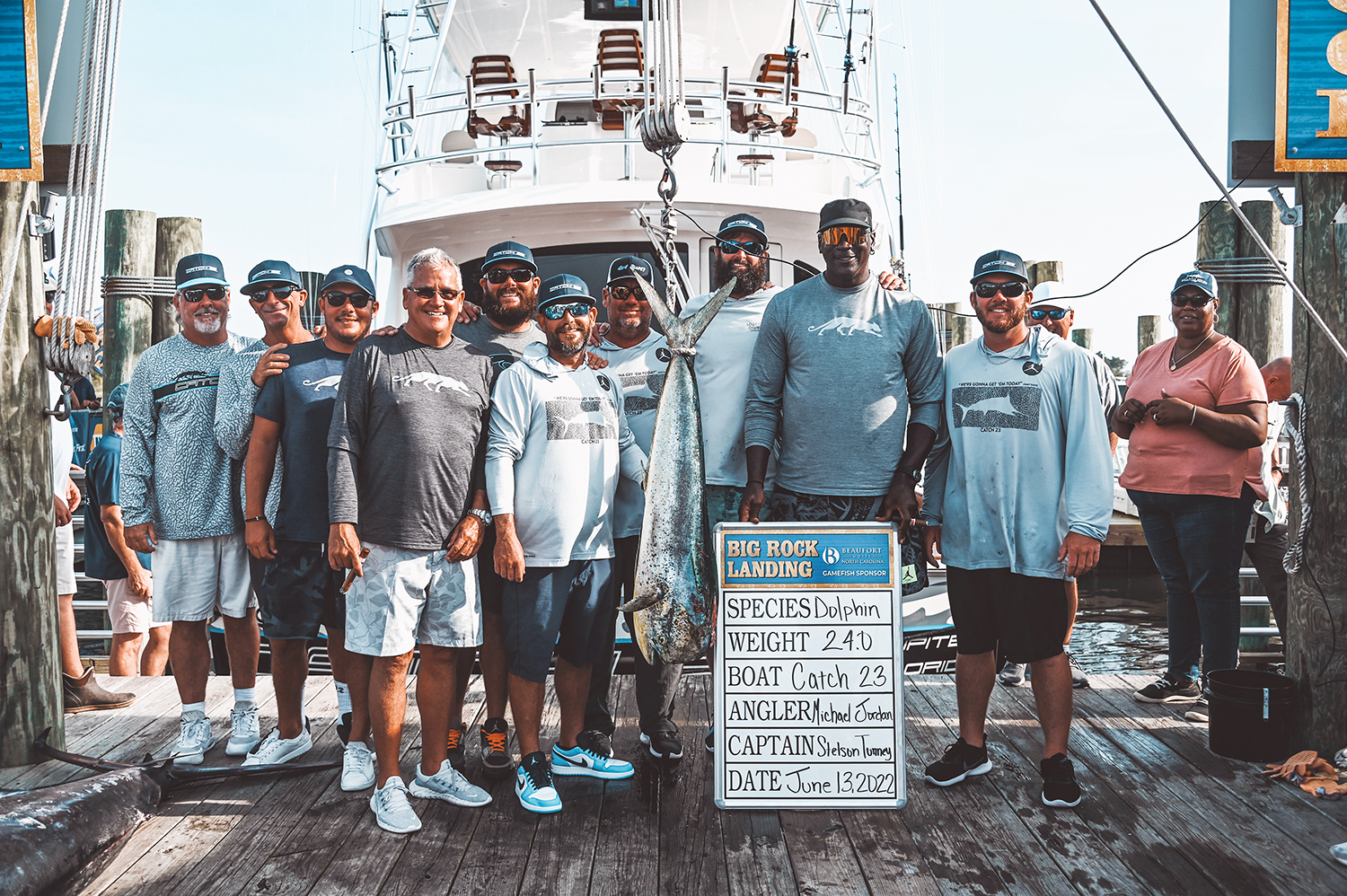 The tournament’s record number of participants and payout have grown greatly especially over the last two decades, as organizers were some of the first to integrate internet broadcasting and social media updates into their operations. The Big Rock Blue Marlin Tournament is one of the only tournaments to broadcast their VHF radio feed live for listeners around the world. Captain Randy Ramsey, the voice of Big Rock Radio, communicates with the boat captains and keeps the audience updated to the second with hookups and releases and the occasional boated blue marlin. This year, nearly 1 million listeners from 60 countries tuned in to Big Rock Radio to keep tabs on the action. Big Rock TV also features daily live stream video sessions and racked up over 2 million viewers in 71 countries this year. Viewership of the first day’s live stream far surpassed average thanks to celebrity angler Michael Jordan and a cameo appearance by PGA golf legend and fellow sportfisherman Curtis Strange.

The Big Rock is not just a week-long sportfishing tournament or unique spectating destination, it is also a charitable foundation that gives to the local community throughout the year. Total charitable contributions since The Big Rock Foundation formed in 1986 exceed $7.5 million. The impressive charitable donations throughout Carteret County and coastal North Carolina are additionally made possible in part by the generosity of over 65 tournament sponsors and other supporters including Major Sponsor and world-renowned custom boat builder, Jarrett Bay Boatworks, headquartered in nearby Beaufort, North Carolina.

MORE NOTABLE WINS for this year’s tournament include the 63-foot Spencer Yacht, “WALL HANGER” claiming second place for heaviest blue marlin with lady angler Stacy Allen weighing a 556.4-pound fish, earning her team $426,288. “HIGH YIELD”, a 57-foot Spencer landed in third Place with a 536.8-pound blue marlin caught by Bernard Linney with a cash payout of $283,525. The Winner-Take-All division for dolphin fish (mahi) was captured by angler Parker Jones aboard the “CAROLINA TIME”, a 56-foot Gwaltney. Their 54.1-pound mahi was worth $527,000. 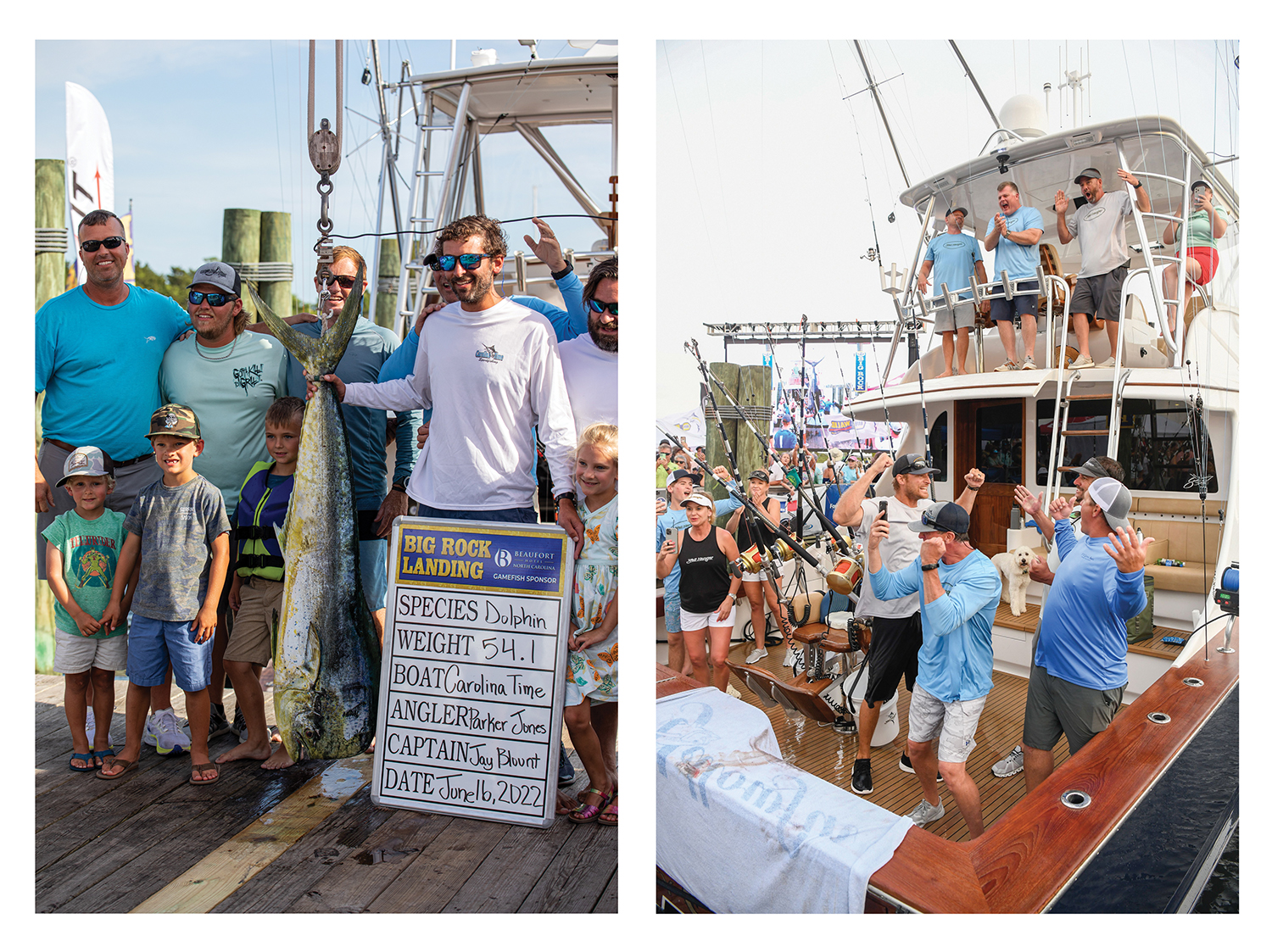 This is the seventh consecutive year the Big Rock Blue Marlin Tournament has welcomed outboard engine-powered boats as entrants, and Captain John Cruise III and the team aboard their 35 Contender, “PELAGIC HUNTER II” secured the lead in the Outboard Division and Winner-Take-All Release in the Outboard category earning a generous payout of $42,500!

Captain Rodney “moon” Crossman and his team aboard the 72-foot Viking, “SAFARI” won the Weekly Release Division worth $112,625 combined with their Daily Release prize of $75,082 totaling a cash prize of $187,707. The 63-foot Jarrett Bay, “MARLIN FEVER” tied with the 62-foot Viking, “IRENE” with 1,200 points in the Non-Sonar Release Division but “IRENE” took first place on time, and a total payout of $172,479. Captain Cameron Guthrie and the team aboard “MARLIN FEVER” enjoyed a cash prize of $77,775 for their second-place finish in the Non-Sonar Release Division.

As the 64th Annual Big Rock Blue Marlin Tournament continues to grow its global following and offshore participant base, so will the charitable efforts throughout the communities the Big Rock Foundation serves. The Big Rock Board of Directors are grateful for the support of so many world-class teams, businesses and organizations, and look forward to June 12, 2023, for the kick-off of the 65th Annual tournament!

Headquartered in Morehead City, North Carolina, the Big Rock Blue Marlin Tournament is more than just an annual event. The mission of Big Rock is to work diligently to promote sportfishing throughout Carteret County and the state of North Carolina while also focusing on conservation among sportfishermen. Exceeding $7.5 million in total contributions since 1986, Big Rock charitable giving helps support worthy community projects, promote marine education, and preserve maritime culture and heritage. The Big Rock, Big Hero program presented by SALT LIFE was created in 2018 to honor active-duty servicemen and women. These loyal members of our military are treated to an unforgettable fishing adventure aboard a world class sportfishing boat alongside elite anglers that are honored to welcome them aboard. The Big Rock also operates one of the largest ladies-only events in the world: The Keli Wagner Lady Angler (KWLA) Tournament. The record-breaking 25th Annual Tournament hosted 215 boats & paid $318,750 in prize money, one of the industry’s largest payouts for a one-day tournament. The KWLA tournament donates proceeds towards the improvement of cancer patient comfort and care in Carteret County. The Big Rock Kids Tournament enjoyed its inaugural year in 2021 with 59 boats and over 200 participating junior anglers. This tournament aims to promote sport fishing among a new generation of anglers while benefiting children’s charities in Eastern North Carolina. To learn more about the Big Rock tournaments and charitable giving, visit thebigrock.com.

Did you miss our previous article…
https://www.hardcoregamefishing.com/marthas-island-fishing-a-beginners-guide/