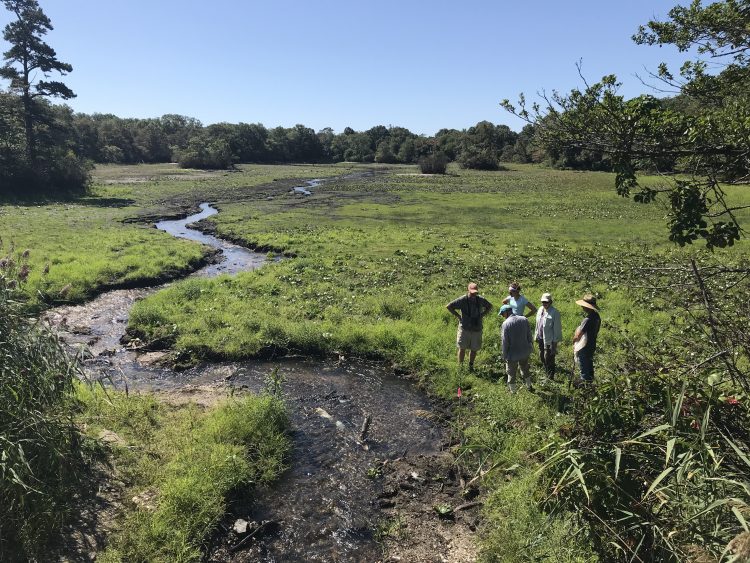 Long Island has more than 500 freshwater lakes and ponds, with over 30 miles of streams connecting them. Like most Long Islanders, though, I associated “home” with salt water and didn’t recognize the importance of the life sustained in the freshwater creeks; specifically, the lives of river herring.

As a kid, I sat in the back seat of my parents’ car and watched as we cruised by countless rivers and ponds on our way east to Greenport. I was baffled by the amount of fresh water spanning the 120-mile stretch between Manhattan and the North Fork. What I didn’t know was that overdevelopment along these waterways had impeded one of Long Island’s most important fish, the river herring, from freely migrating from the ocean into its freshwater spawning grounds.

Dams and culverts obstruct the herring’s migration route, and without intervention, the numbers of this once prolific baitfish are doomed to dwindle. Fortunately, the public is being made aware of the importance of our freshwater resources on Long Island with the help of groups like the Seatuck Environmental Association. This organization is educating local communities on the importance of fish passage in our waterways and the role river herring play in maintaining healthy ecosystems for Long Island’s wildlife.

“River herring” are anadromous, filter-feeding fish. There are two species common in the Northeast, the blueback herring and the alewife, with the alewife being more common in Long Island’s fresh waters.
From early March until mid-May, alewives migrate into smaller freshwater rivers to spawn before hitching an easy ride with the current back out to sea. The herring migration coincides with the spring striped bass migration, and herring are an important food source for stripers in the rivers and the ocean.

Alewives bring marine nutrients with them into these freshwater habitats as they head to spawn—much like salmon do in the Pacific Northwest—nutrients that are important to the survival of birds, mammals, fish, and plants that live in Long Island’s fresh waters. When the migration of herring into the rivers and ponds is impeded, resident wildlife suffers.

According to Emily Hall, a Conservation Policy Advocate with Seatuck Environmental Association, almost all of the remaining dams are obsolete and no longer serve their original purpose and should be removed, if possible.

A central focus of Seatuck for the last 20 years has been improving river habitat for diadromous fish such as river herring and American eels. The organization currently has 10 fish-passage projects underway aimed at restoring Long Island’s rivers to their most natural, free-flowing forms.

Reviving a river is not a simple undertaking and Hall described the process. These projects require several steps: extensive field research and analysis, project planning, and permitted access all must be obtained before any excavation or construction can be done. Heavy equipment and a sufficient workforce are also necessary for these projects to be completed in a timely manner.

According to Hall, Seatuck has several options for creating fish passage in areas where herring have been recorded and noticeably stuck. The first option is dam removal, which sounds as simple as knocking down the wall and allowing the river to flow freely. However, in some cases, the dams created ponds that would have otherwise never existed. When dam removal is not a viable option, there are a few other ways to create fish passage for herring.

A fishway, which is a gradually cascading, seemingly natural flow of water, may allow fish to swim against the current where a dam or spillway would not allow them to do so. If the dam must remain, a technical “fish ladder” could be constructed.

The Mill River in Hempstead is one of many ongoing sites of study and construction by the Seatuck group. Here, river herring have been documented as far upstream as the spillway beneath Smith Pond in Rockville Centre. (Smith Pond sits just south of Hempstead Lake State Park.) Right now, a dam at Smith Pond keeps river herring from continuing their journey to spawn in fresh water. Instead, they swim all the way upstream from Hewlett Bay to the Smith Pond spillway only to be stuck in a pool of brackish water.

Currently, only the primary barrier at Smith Pond’s spillway is eligible for a fish ladder on the Mill River. Hall explained that a study always begins with the most seaward body of water since it will be the first obstruction to the herring during their migration–in this case, Smith Pond.

At this time, there’s no opposition from the public for a fish ladder. Over the past few years, there have even been “fish lifts” on Smith Pond to supplement a fish ladder. A fish lift is exactly what it sounds like: a gathering of local volunteers physically lifting fish from the base of the spillway up into the pond to help them complete their journey and spawn. Their purpose is to get the river herring into fresh water while educating the community by inviting the public to take part in the lifts.

Actively involving the public in such practices creates community awareness by connecting locals with the nature that sits right in their backyards. River herring don’t just bring nutrients and food to fish in freshwater ponds—they are followed by all types of wildlife. Hall explained that otters have returned to Long Island along with the herring and several species of waterfowl and birds of prey, including hawks, herons, gulls, and ospreys. While the Mill River cannot be entirely restored to its original free-flowing form, Seatuck is working to adapt it to further protect the herring once a fish ladder is in place.

Hall suggested there is a possibility that alewives (with the assistance of a fish ladder) could make it as far as Hempstead Lake’s South Pond to spawn. It would first require a prolonged study of herring populations that have made it into Smith Pond, then assessing if they are attempting to migrate further north.

There are currently 10 major river revival projects that the Seatuck Environmental Association has undertaken between western Nassau County and Southampton.

In 2014, five years after implementing a fish passage in 2009, the Seatuck Environmental Association documented the first river herring to swim past the Argyle Lake dam in over 100 years.

Construction of a natural-inspired fishway is underway and will allow river herring into Swan Lake to spawn for the first time in over 200 years.

The dam failed in 2019, emptying a pond and allowing the river to flow freely into Great South Bay.

This river hosts the largest remaining run of alewives on Long Island, with an estimate of over 100,000 fish annually.

For now, there is continuous movement in the right direction. Although not working as quickly as we might like, the restoration projects currently underway on Long Island’s waterways will lead to more prolific alewife runs in years to come. An increased presence of herring should improve water quality, along with the health of Long Island’s freshwater and saltwater fisheries.

The post Alewife Revival appeared first on On The Water.