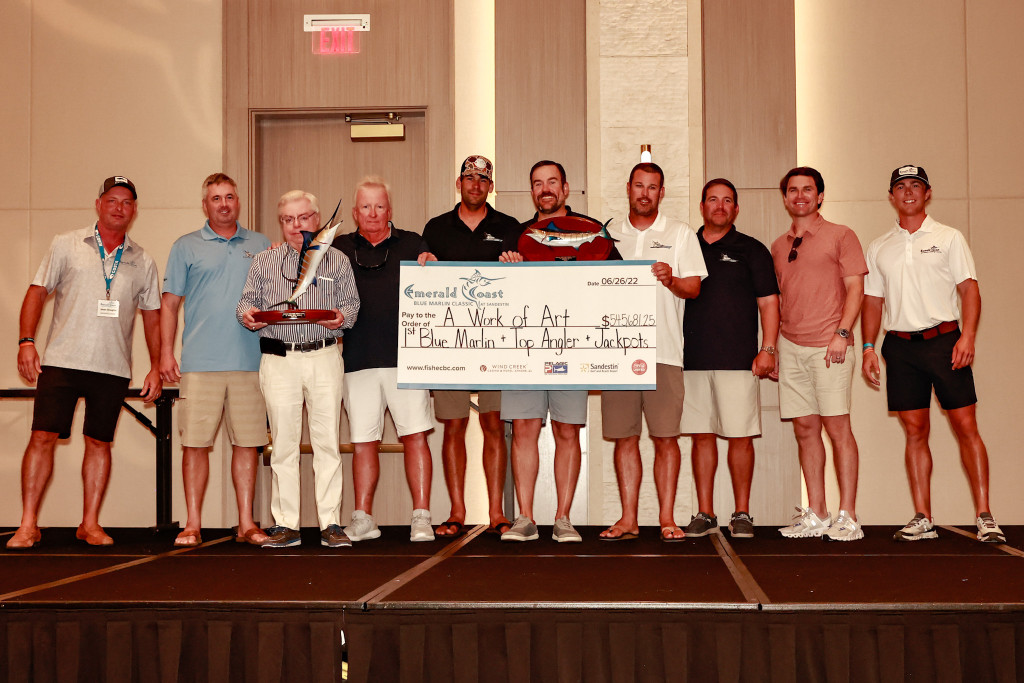 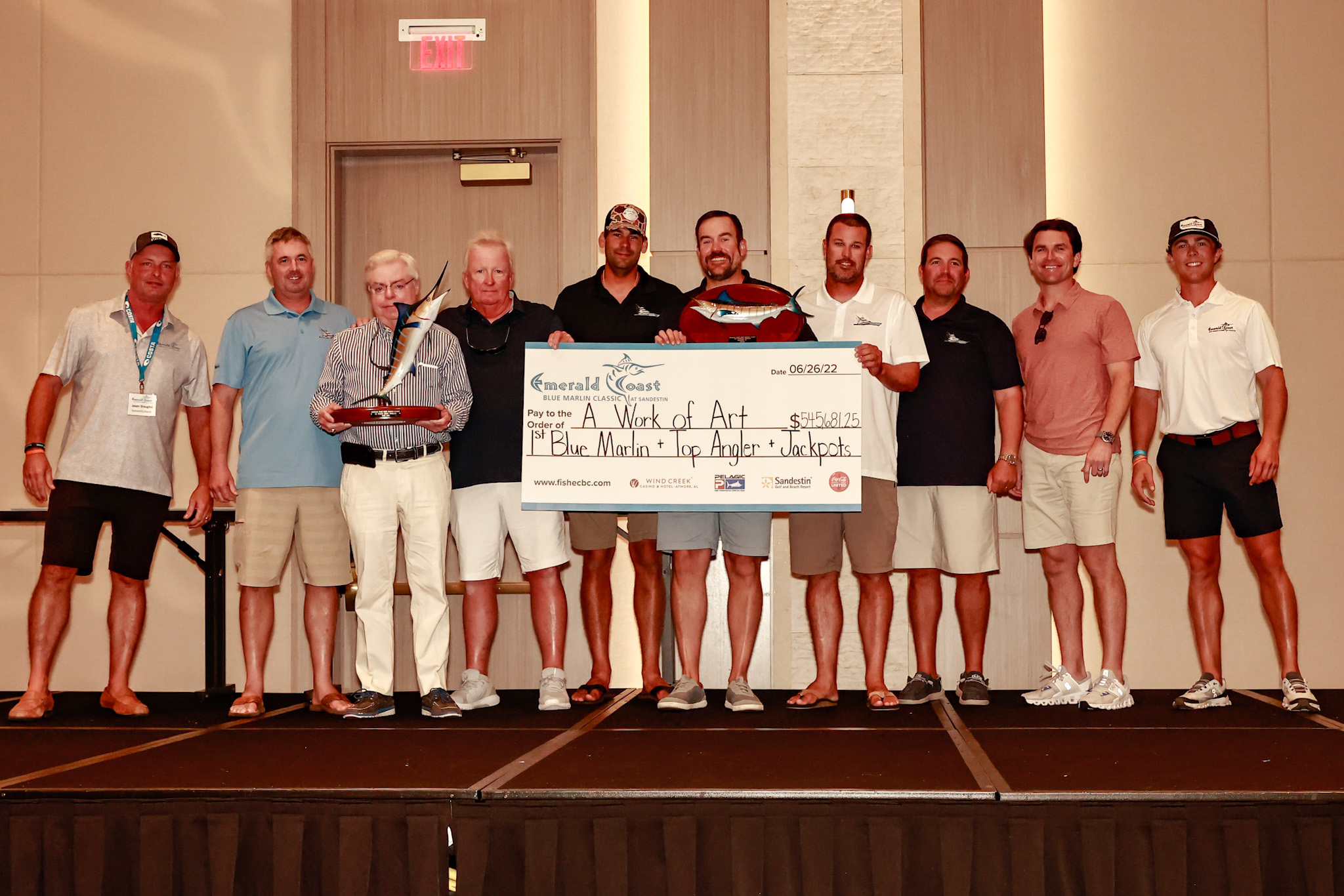 The crew of the Work of Art posing with the check for their prize money.

Miramar Beach, Florida— Angler Christian Fast, Capt. Jason Buck and the team aboard A Work of Art won the 20th anniversary Emerald Coast Blue Marlin Classic after weighing the largest blue marlin at 638.7 pounds. The team also released three blues. With tournament awards and optional entries, that effort was worth $545,681. Art Favre owns the 92 Viking based in Orange Beach, Alabama. The 84 teams competing in this year’s Classic were angling for $1.987 million in overall prize money.

“I’ve fished the ECBC since the beginning,” Favre said. “We were fortunate to win the top Catch and Release one time, but this is our first in the kill division. So this is a sweet win after all those years, to get in the top slot in this tournament. I’m honored and humbled by it.”

Quantified, a 64 Spencer run by Capt. Justin Drummond, earned the next biggest payout without boating a fish. The Texas team set an ECBC record by releasing 12 billfish. The tally included two blues, seven whites and three sailfish. That impressive feat earned $245,505 in the Top Team Release and Crew awards, plus the optional release jackpots.

“I give all the credit to my team,” Drummond said after Sunday’s awards brunch. “I’m just the bus driver. We’re definitely going against the grain with our style of fishing, but it works for us. This year we’ve gotten lucky. ‘Lucky’ means opportunity and execution, though.”

Benedetta, a 70 Viking with Capt. Curt Gwin on the flying bridge, brought in the second-place marlin at 547.9 pounds. Kirk Aronson was the angler, and that fish was worth $85,626.

Nimrod Frazier, Capt. Hunter Forbes and the team on Raise ‘Em Up, a 56 Sunny Briggs, weighed the third-place blue at 513.3 pounds. With optional entries, that catch paid off $156,339.

Sea Wolff (Capt. Jared Quick/angler Troy Layton) earned $30,375 for a 503.7-pound blue marlin. Briar Patch also pocketed $27,000 for a 469.3-pound blue (Capt. Nick Hunter/angler Mary Katherine Adams). Up to It, a 52 Viking based in Destin, weighed a 457.4-pound blue that didn’t make the leaderboard. Capt. Rodney Johnson was running the boat and Damien Bond was in the chair for that catch. The team did win $28,440 in optional dolphin jackpot money (33.2 pounds/angler Chase Bond).

C-Ya, a 74 Spencer (Capt. Devin Potts), released four billfish to win third place in the Release Team and Crew divisions. That effort was worth a check for $101,443.

Salt Shaker, a 58 Viking with Capt. Dennis Bennett at the wheel, took two first-place categories to earn $168,307. Chris Hatcher whipped the top tuna at 192.4 pounds, while Jeff Singleton wound in the fattest wahoo at 64.7 pounds.

Reel Fire (76 Viking), with Kate Dorland in the chair and Capt. Scooter Porto at the helm, weighed the second-place yellowfin at 170.8 pounds. That fish paid out $58,653 in tournament and optional entry money. Perra Mala, a 57 Spencer run by Capt. Brian Bramlett, brought in the third-place yellowfin at 149.4 pounds. Richard Rucker was the angler on that fish, worth $23,779. The other boats winning money in optional tuna jackpots include Liquid Apple, Don’t Blink and Linda Lucille.

“I’d like to thank all the teams for helping us celebrate our 20th anniversary and our wonderful sponsors and hard-working staff for making it possible,” said Tournament Director Jason Draughn. “We look forward to seeing everyone again June 21-25, 2023, to kick off the next decade of the Emerald Coast Blue Marlin Classic.”

About Sandestin Golf and Beach Resort®

Sandestin Golf and Beach Resort is a major destination for all seasons and all ages and was named the #1 Resort on Florida’s Emerald Coast. The resort invites guests to a world of 2,400 acres and 30 charming neighborhoods featuring over 1,000 vacation rentals, condominiums, villas and town homes, as well as Hotel Effie. As a member of Visit South Walton and Visit Florida, the resort features more than seven miles of beaches and pristine bay front, four championship golf courses, 15 world-class tennis courts, 19 swimming pools, a 226-slip marina, a fitness center and spa, meeting space and The Village of Baytowne Wharf, a charming pedestrian village with events, shopping, dining and nightlife. People are invited to download Sandestin’s APP for iPhone and Android devices, or follow us on Facebook, Twitter and Instagram for the latest events and news.

Did you miss our previous article…
https://www.hardcoregamefishing.com/a-traveling-mates-must-have-tools/