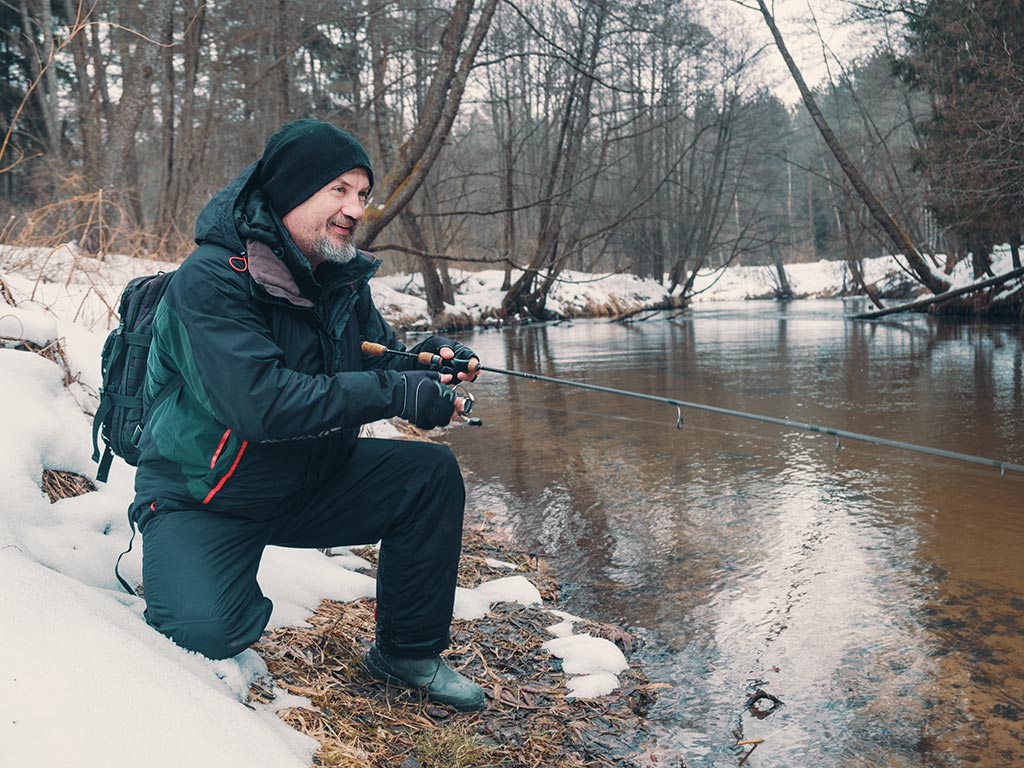 Cold or not, you won’t keep a motivated angler away from their favorite pastime. In many ways, winter fishing is the perfect opportunity to try something new. Whether that means trying out a new fly pattern or going ice fishing for the first time, we’ll leave that up to you. But if you’re wondering where the best fishing is found during winter, you’ve come to the right place!

In this article, we’ve picked out nine places from across the United States where you’re bound to have a memorable winter fishing trip. It’s a big country and these are far from the only places worth visiting during the holiday season and beyond, but they should get you pumped for some cool-weather action. So without further ado, let’s jump in.

Our first entry, Islamorada, is probably the best-known location we’re featuring this year. Anglers love the “Sportfishing Capital of the World” for its fishing, while regular tourists can’t get enough of the beautiful beaches, parks, and diverse wildlife.

This winter, the focus will be on Sailfish, with long-standing tournaments held in January and February. The Gulf Stream is the place to be for anyone with an interest in sailfishing. Even if you’re not a tournament-goer, you can still have a great time on a charter boat with a captain who’ll show you how it’s done.

Another option is to check out the reefs and target some delicious bottom fish. These reefs are full of Groupers, Snappers, and Hogfish, and you can have an absolute blast even on a shorter trip. It’s best to do this type of fishing at the tail-end of the season since mid-winter fishing isn’t as good.

Long-time readers may remember Lake Mitchell from our 2021 picks list. Guess what, it’s still one of the best ice fishing destinations in Michigan and the wider Great Lakes region! And thanks to regular Walleye stocking (paused during the pandemic but continued again this year) things are looking to stay that way for years and years to come.

Of course, it wouldn’t be such a great lake if it only had Walleye on the menu. Come on down and you’ll be able to go after the likes of Crappie, Bluegill, Yellow Perch, Northern Pike, and more. As you can see, you certainly won’t be short on good table fare if you decide to drill a few holes here and go to town.

Apart from the excellent fishing, there are plenty of other activities to try if you’d like to bring your family or friends along. All the winter staples are here, including skiing, snowboarding, and snowshoeing, among others.

Our next location, Virginia Beach, is a different kettle of fish – quite literally! In case you didn’t know, this city has the honor of being known as the “Striped Bass Capital of the World.” November marks the start of peak fishing season for Stripers (locally known as Rockfish) and will last up until February.

Whether casting from the surf, pier, or a boat, you’ll find that this fishery has earned its nickname for a reason. Some lucky anglers have even managed to bring in 70+ pounders with their rods and reels. That’s what we call a winter wonderland. Your average catch will probably be a bit more modest than that, averaging 10–30 pounds in most cases.

And when you’ve had your fill of Rockfish, you can also go out and target other species. These include Tautog, Flounder, and Bluefish. You can even go the extra mile and hire a charter to take you in search of Bigeye and Bluefin Tuna. How’s that for variety?

Heading down to the Gulf Coast, our next winter fishing location is Louisiana’s Iberia Parish. It’s home to 24 lakes, including names like Oyster Lake and Tigre Lagoon, along with Cypremort Point’s direct access to Vermilion Bay and the Gulf. Consistently mild temperatures allow you to fish throughout the year, but the first few months of the year are a special treat.

As you’d expect from that many freshwater options, you’ll be able to go after a diverse cast of fish. Largemouth and Smallmouth Bass are a given, but there are also Bluegill, Sunfish, White and Black Crappie, White Bass, Striped Bass, and Catfish.

The saltwater is nothing to scoff at either. Redfish and Speckled Trout are a dynamic duo in the flats and marshland that’ll put your sight casting skills to the test. Meanwhile, offshore waters contain huge Yellowfin Tuna and Wahoo if you’re up for some good old-fashioned trolling.

The Yakima River is the longest river entirely in Washington State, and is a great place to cast some flies in the cold months. Washington’s only Blue Ribbon Trout stream is also our only West Coast pick this year – but, boy, is it a good one.

Unsurprisingly, the main attraction here during wintertime are Rainbow Trout. It’s at this time of year they get “funneled” to specific zones where anglers in the know will target them with gusto. These defined drop-offs and slowdowns following large riffles are known as “feed me” zones and are a hallmark of Yakima River winter fishing.

Most of the time you’re unlikely to run into a lot of other anglers during your day on the water. That said, you can count on company in the form of elks, blue herons, and bighorn sheep. Nature’s beauty at its finest.

With over 400 public waters to choose from, we were hard-pressed to pick out one single fishery from Nebraska for our list. Eventually, we settled on Merritt Reservoir. Not only is the ice fishing here fantastic, but the sights in this picturesque valley are to die for.

Winter anglers like Nebraskan waters because they tend to have far less snow covering the ice than those in more northern locations. As an extra bonus, the breathtaking astronomical views make it a popular stargazing destination to boot.

Your main fishing target in Merritt Reservoir will be the ever-popular Northern Pike. The biggest Pike caught here weighed a whopping 22 pounds, and a few lucky anglers will catch fish in the mid to upper teens every year. Other winter catches include Crappie, Perch, and Bluegill. All in all, it’s another ice fishery more than worth your while.

Located in south-central Oklahoma, the Blue River is all about that Trout bite come winter. More specifically, Rainbow Trout, which you’ll find in the creek channels, main river channels, and among the rocks all along the way.

The Blue River Association plays host to two annual Trout derbies that take place during the weekends around Veterans Day and Presidents’ Day. If you like the sound of that, the next one is right around the corner in February. Over $1,000 in trophies and prizes will be on the table, including awards for heavy stringer and heaviest Trout.

And if you’re not the tournament type, don’t worry! Plenty of anglers go solo fishing here during the coldest part of the year when the fishing is best. From November through March, the Blue River becomes a world-class fishery, especially for all the fly fishing fanatics out there.

For our next entry, we have another Trout fishery, but this one’s as unique as it gets. You see, the Lower Salt River is the only cold-water Trout fishery that’s located in the Sonoran Desert. This is a year-round fishery, but we’d say anglers consistently overlook the winter bite for no good reason. Fortunately for you, that means you won’t have to worry about crowding when you go fishing.

During the winter season, the Lower Salt River is stocked with Rainbow Trout every other week up until April. But a word to the wise, fishing early in the season is often a little hit-and-miss. This is why you should aim for January and onwards if you want the best possible Trout fishing experience. The river itself is right outside Phoenix, meaning it’s easily accessible whenever you decide to chance it.

What if you don’t care much for the winter and cold? What if you’d rather go somewhere sunny with clear skies and big fish? In that case, we recommend booking a flight to the US Virgin Islands. It’s a fantastic choice for a fishing trip that combines the nature and beauty of the Caribbean with the ease of domestic travel.

As nice as all of that is, it’s the fishing in the Puerto Rico Trench that really takes the cake. A bonafide angling paradise all year long, winter fishing here is no exception. The season’s main stars are Sailfish, Tuna, and Mahi Mahi. Sailfish like to stick around offshore reefs, while Tuna and Mahi move around a lot, so you’ll want to troll until you find them. The local charter captains know their stuff and can show you where the main hotspots are.

And So Many More…

Like we said at the beginning, this is only the tip of the iceberg when it comes to winter fishing in the US. Sometimes, finding your own perfect getaway is part of the charm. We hope this jaunt across the States has inspired you to do something exciting this winter season. And if you’d like even more winter hotspots to choose from, take a look at our last year’s list. To borrow from an old phrase: the best time for fishing was yesterday, and the next best time is now!

What is your idea of a perfect winter fishing location? Any places to suggest for next year’s list? We’d love to hear from you in the comments below.